Margate. Or should I say ‘Margit’ in deference to my dad?

I remember it well. As a kid we used to have our family holidays there. A 100 mile round trip courtesy of British Rail; spending the day on the beach with deckchairs, windbreaks, buckets and spades, ice creams, donkey rides and digging huge holes in the sand.

Every so often there would be a crackle, then a posh sounding lady would say over the Tannoy, “This is the first aid post at the clock tower. I have a little lost boy whose name is… what is your name?” (Cue screaming brat in the background.)

Later in the afternoon when the hired deckchairs and windbreak were taken back, we were allowed to keep the deposit money for the slot machines in Dreamland. 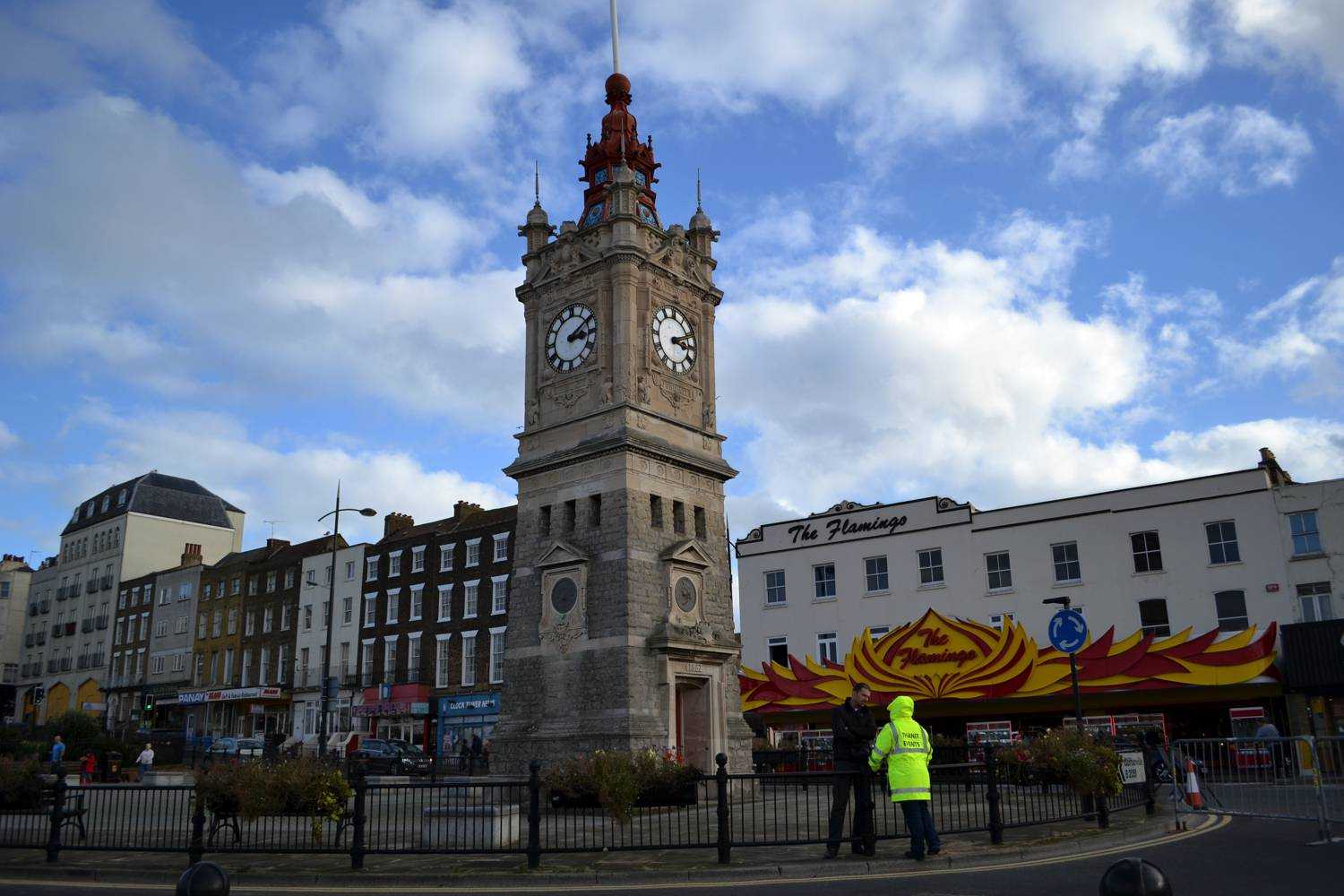 And then after we’d washed the sand off our feet it was fish and chips (for tea mind, not dinner) before spending the evening at the aforementioned amusement park, on the Caterpillar, the Scenic Railway, the revolving house, the dodgems, and the little train that went round the back of it all to a bizarre settlement of fibreglass American Indians – or ‘Red Indians’ as they were called in them there days.

I also remember enjoying riding little motorbikes on a roundabout; they were American Indians too – the kind that come with screens and panniers.

Then it was back on the big train at about half nine, complete with whoopee cushions and itching powder bought as we daringly laughed at the fake boobs in the joke shop in Burlington Arcade, in the shadow of the skyscraper. Happy days.

As S.E. Hinton wrote some years later, “That was then, this is now”.

Dreamland has been closed for decades but keeps threatening to reopen as a heritage theme park. Many of the town’s shops have closed down, despite Chas & Dave’s eponymously titled single urging their fans to visit in the 1980s.

The promise of regeneration, the controversial intervention of ‘Queen of Shops’ Mary Portas, and even the £17.5m Turner Contemporary art gallery all so far seem to have failed to jump start Margate’s fortunes.

From my point of view the magic of Margate had gone, along with the donkeys and Dreamland. Even though it’s only an hour’s drive away, I’d always believed that there wasn’t much that would attract me back there these days.

Except perhaps the prospect of dozens of motocross bikes and quads racing up and down the beach. 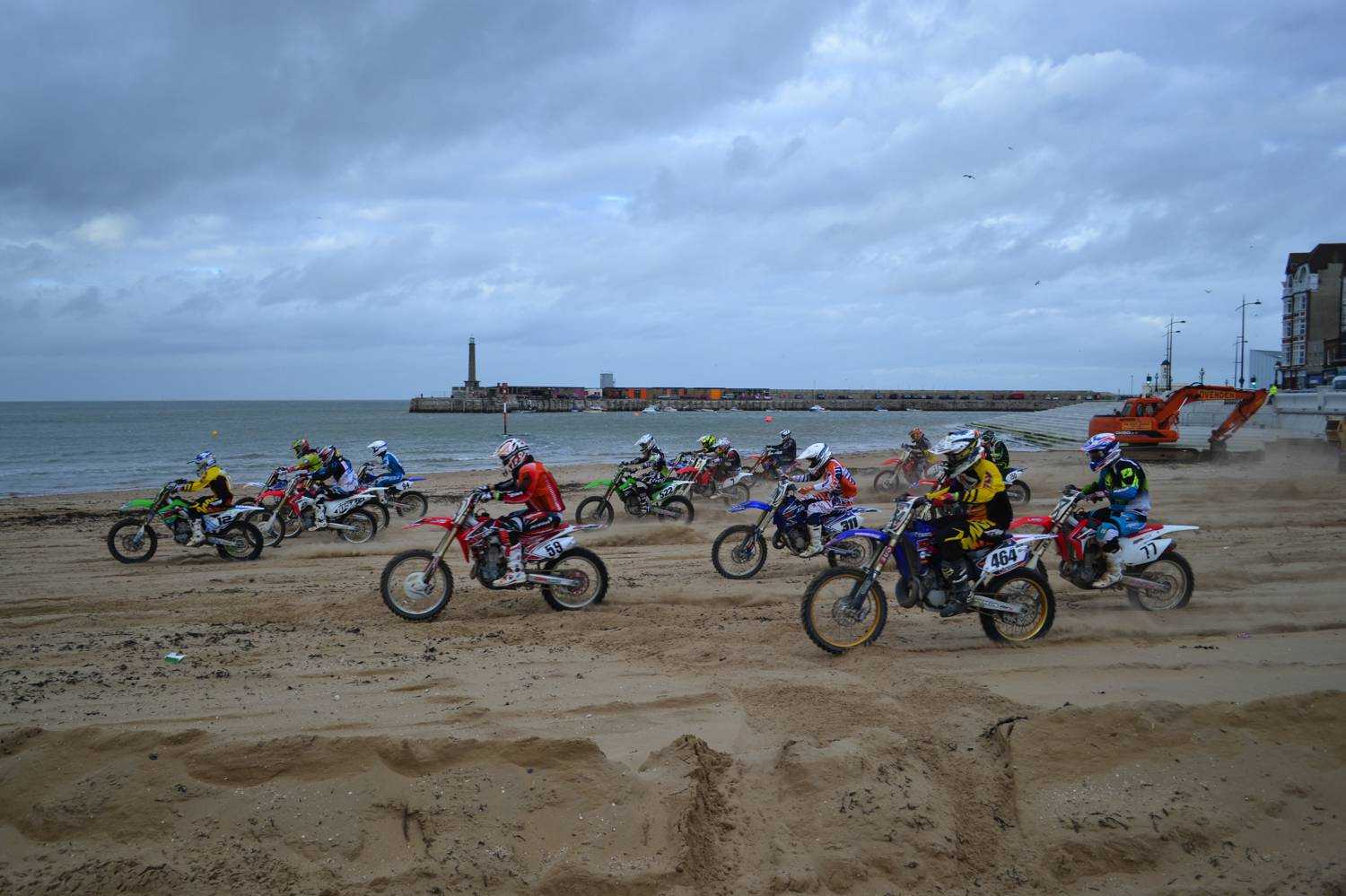 Unlikely as it seems, Margate is one of a handful of UK venues where the Quad Racing Association hold their biannual ‘Beach Cross’ meetings. Riders on two and four wheels (in separate heats) follow a tortuous and twisty track over several jumps on the resort’s famously soft fine sand, in a bid to take the chequered flag. 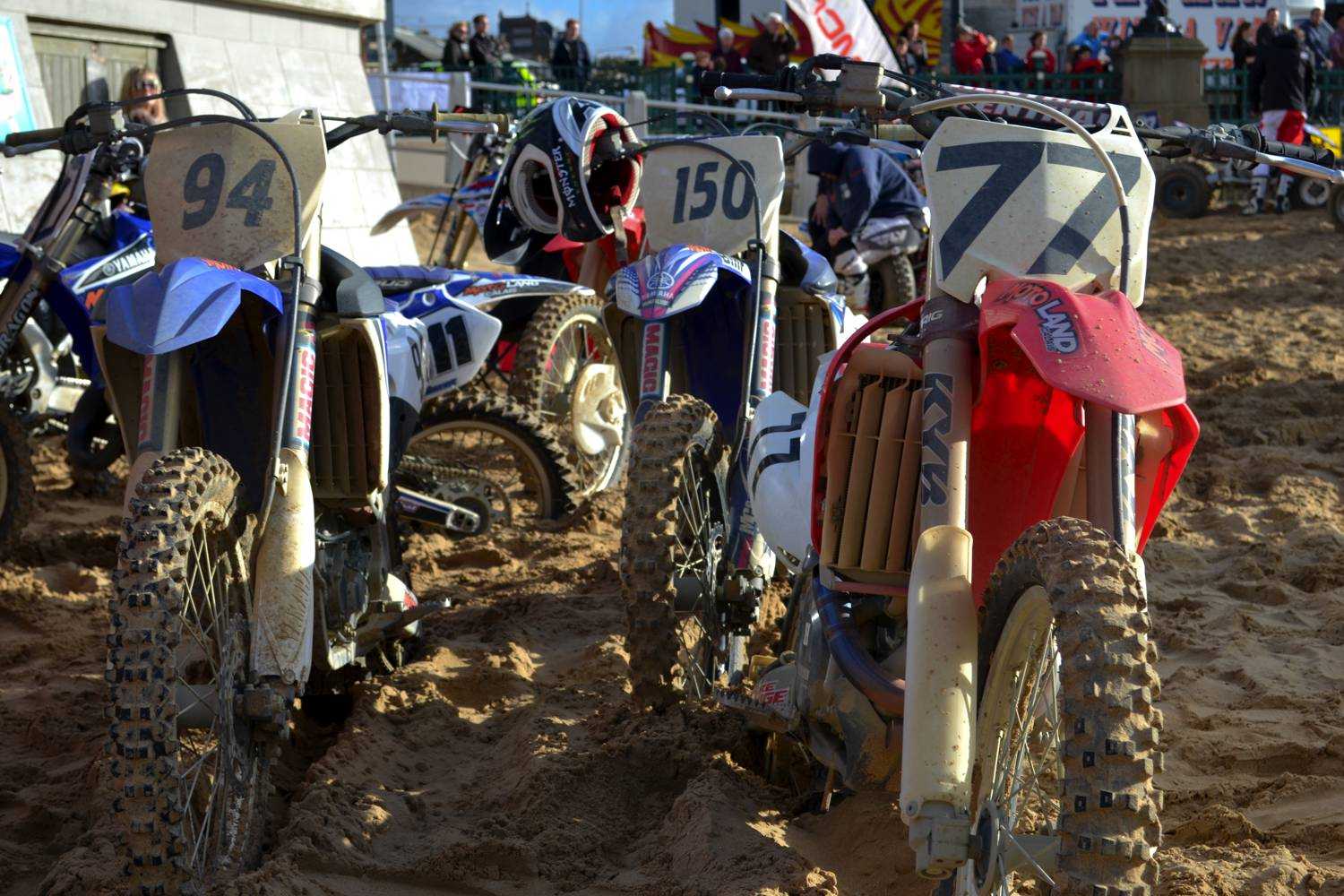 The course, constructed over several days with the help of some heavy plant, can vary in length, but is usually between one and three miles. Races last for fifteen minutes plus one lap, and the outcome depends as much on the rider’s fitness as the machine being in fine fettle. 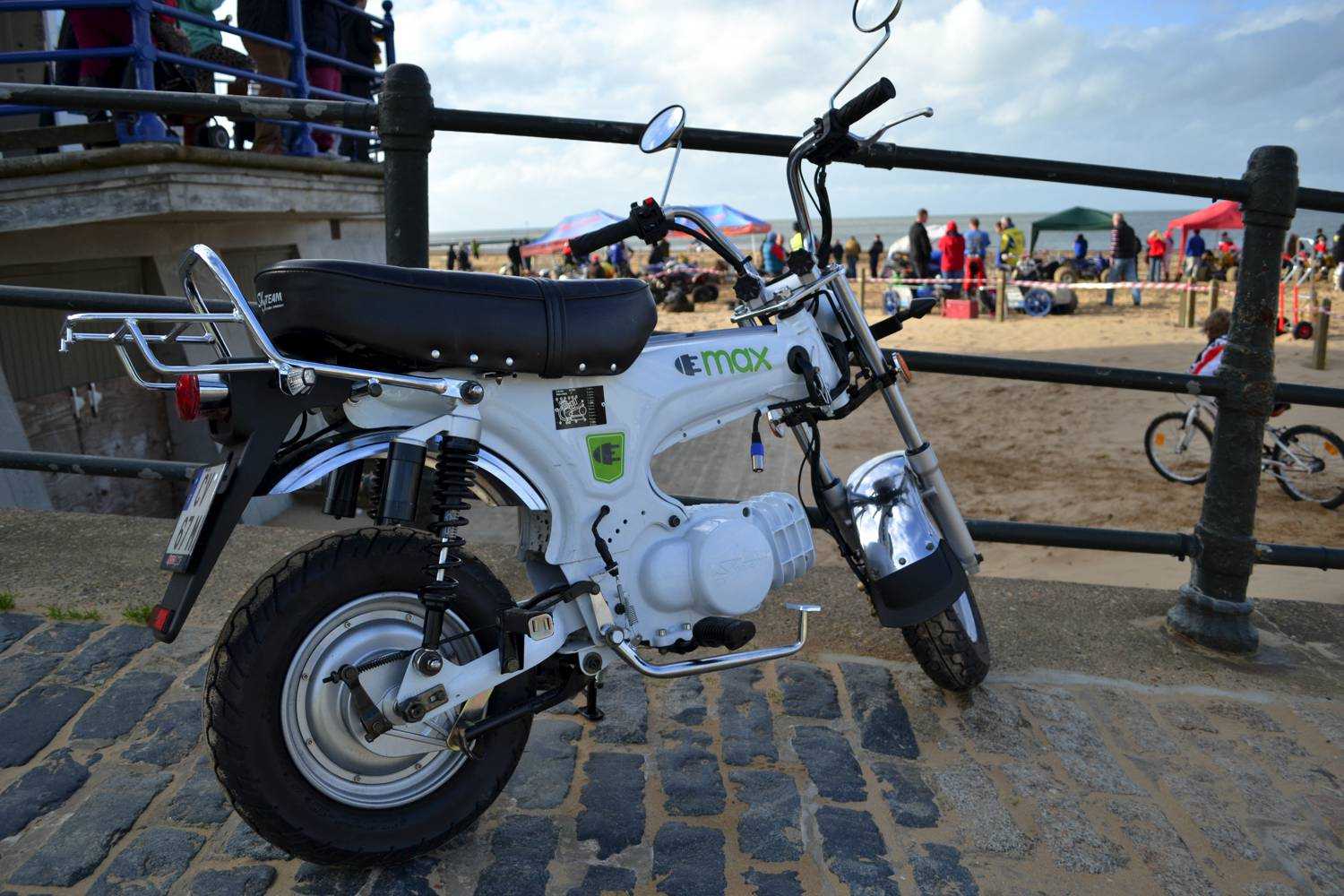 One unexpected problem at Margate was the wind whipping in from the sea, the race weekend was in late October just before the infamous St Jude storm swept through claiming several lives across the UK as its gales caused chaos and destruction.

Pit crews used ingenious methods to stop awnings blowing away, including weighing them down with spare bike wheels, but one or two of the canopies succumbed to the elements, leaving their twisted frames lying in a heap. 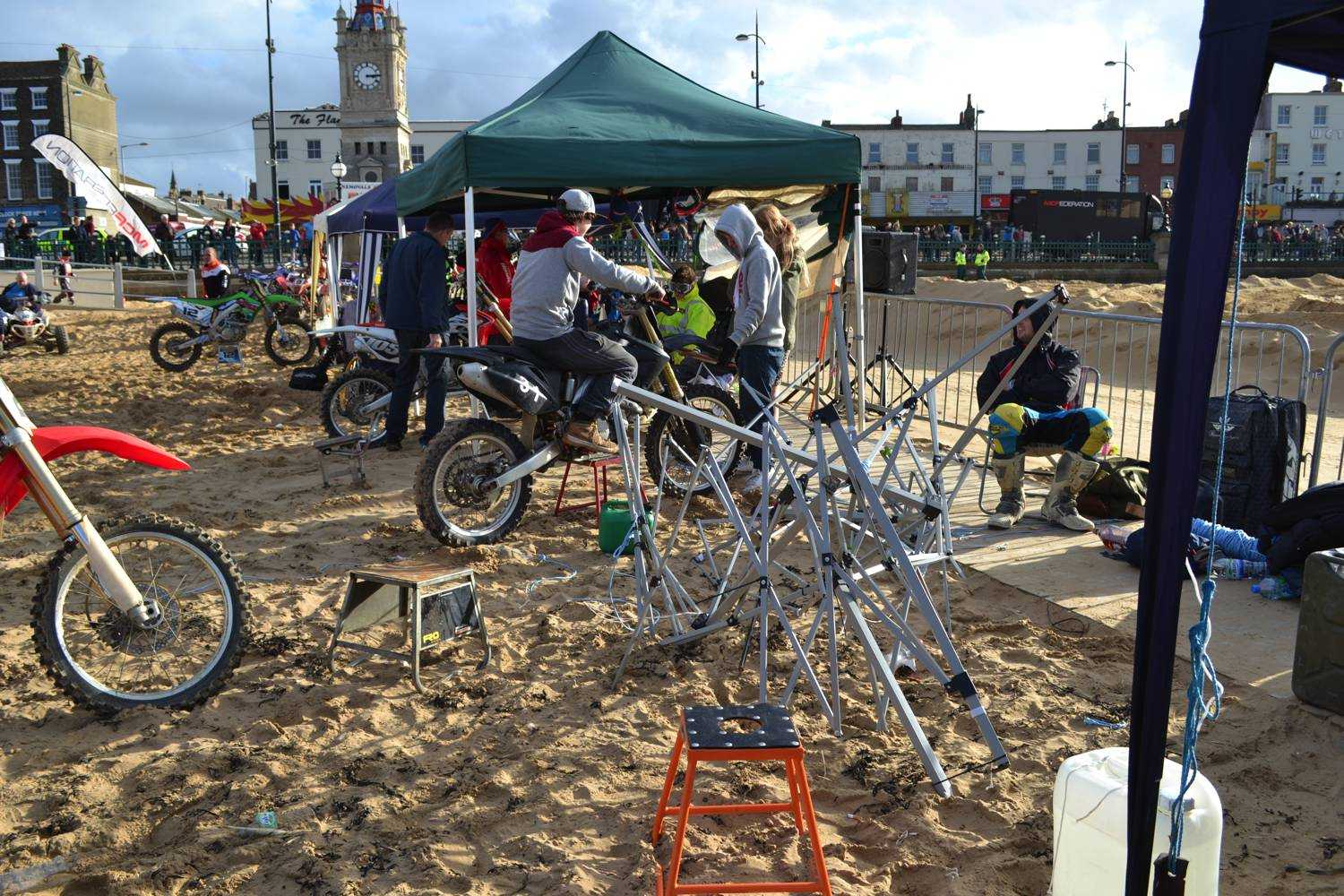 The sand brought its own problems, several of the solo (as opposed to quad) riders I spoke to mentioned the excessive wear on fork stanchions and drive chains, the latter through necessity are deliberately kept dry to avoid collecting surplus sand and creating a uniquely effective grinding paste. 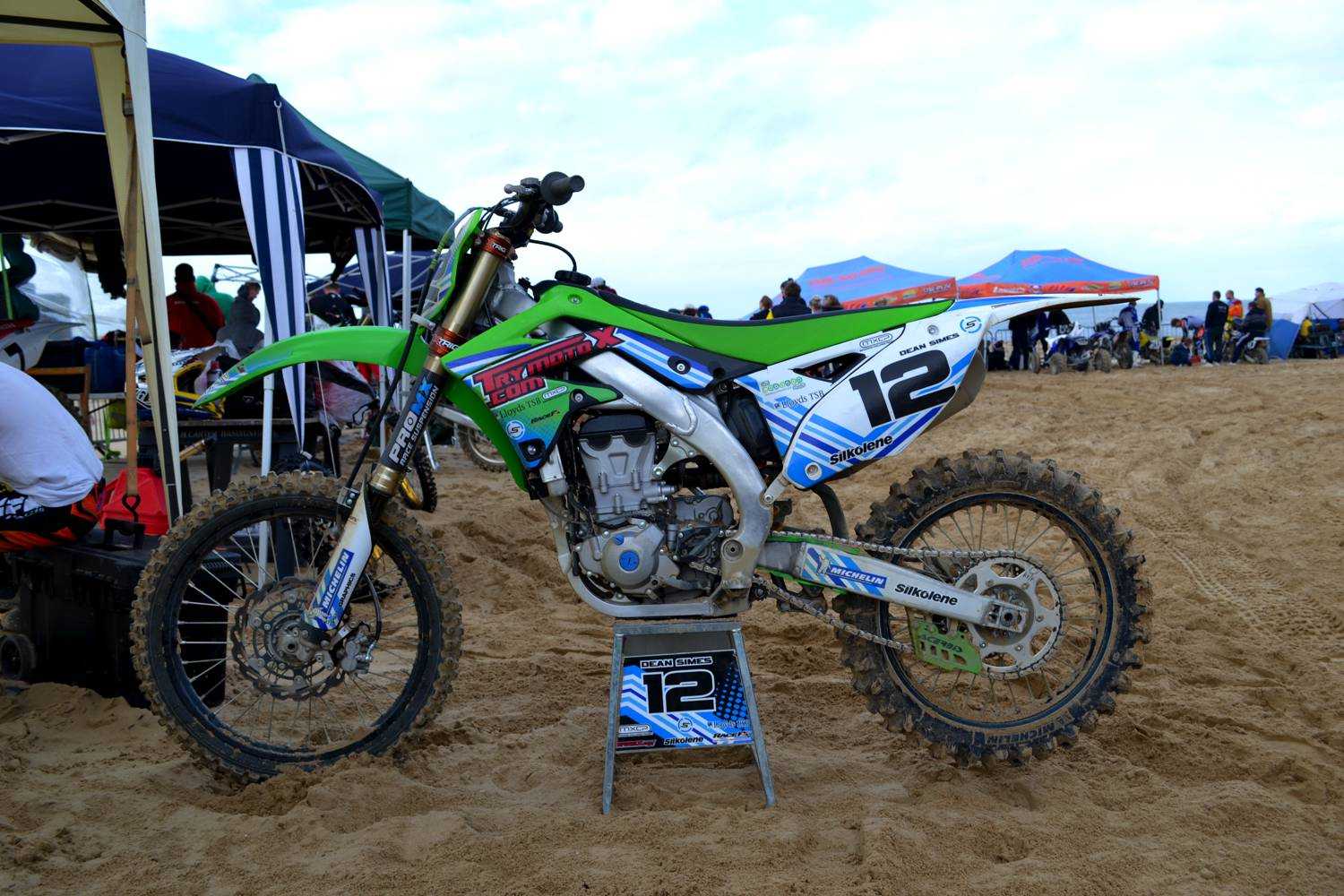 On the flat the riders spent much of their time sitting as far back on their seats as they could to increase traction, the smaller capacity machines struggled to make headway on a surface that was so soft it was difficult to even walk on.

The bigger bikes seemed better able to cope with the loose surface, many of them getting spectacular ‘air’ over the jumps and skimming across the flatter sections of the beach. 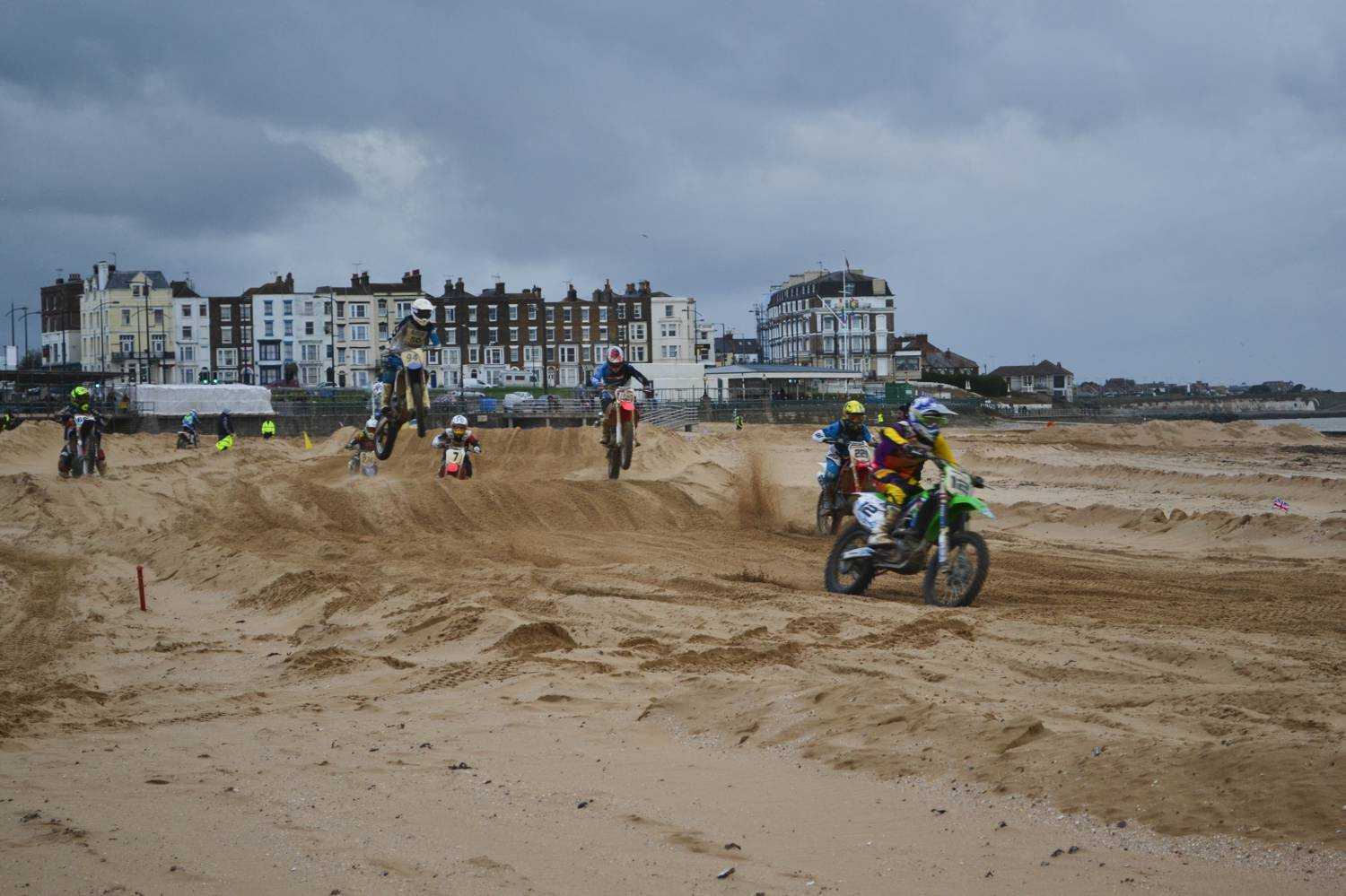 Specialist tyres didn’t seem to be much in evidence, although I did spot a Honda CRF450 sporting an exaggeratedly ribbed front tyre that looked as though it had been borrowed from a Massey Ferguson. At first glance the bike didn’t appear to have a performance or handling advantage over bikes wearing more traditional motocross tyres, although rider Jamie Wilson was the highest placed British contestant in the solo classes. 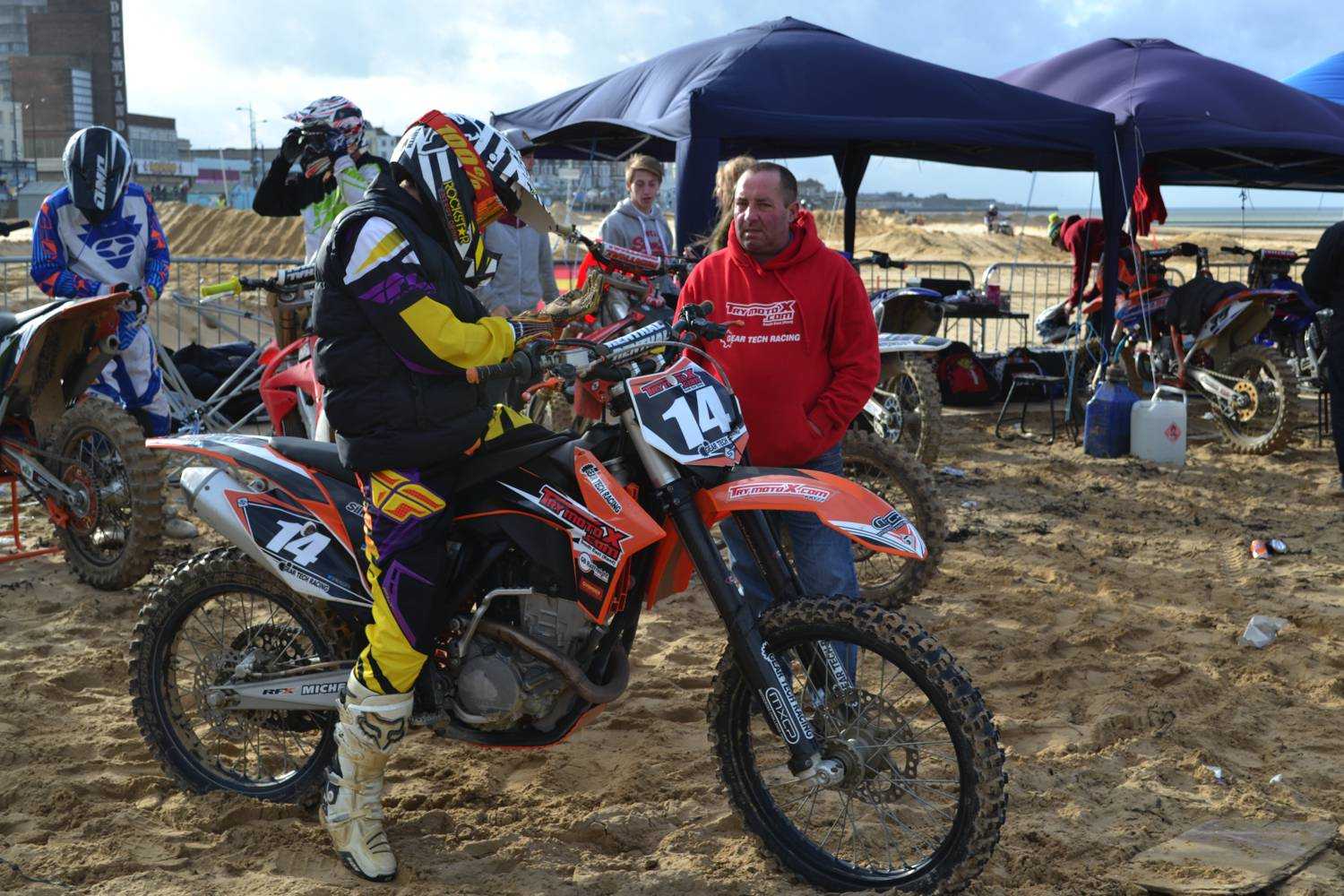 Riders flocked to the event from all over the South East as well as France and Belgium. In the paddock, an area around the base of The Sands Café, many of the riders took advantage of the soft terrain, avoiding the need for paddock stands for their bikes between races, by digging the rear wheels in so that the machines stood in bizarre formations as though waiting to take off on their own. 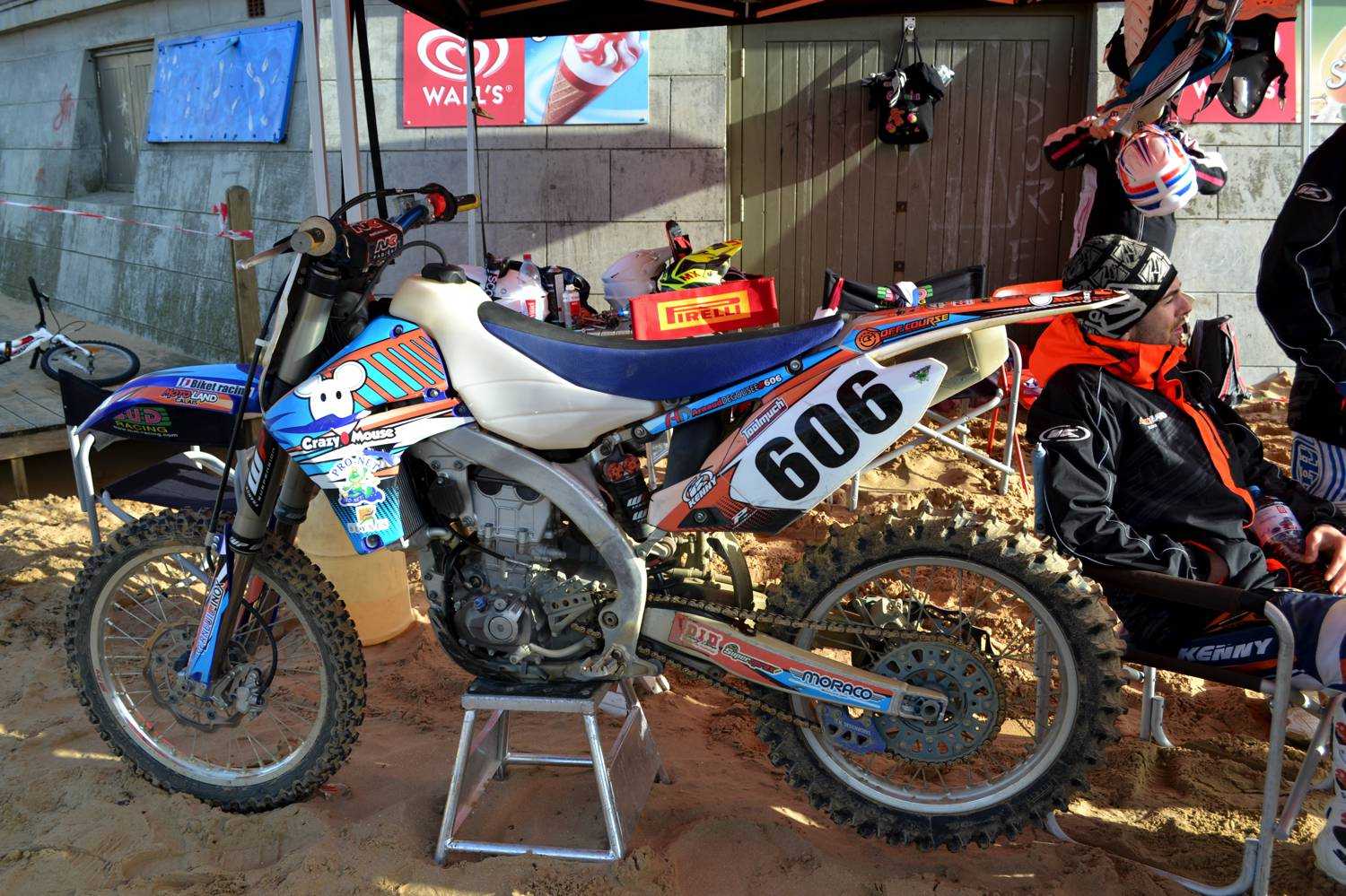 One team member commented that although most of the competitors were seasoned motocross campaigners, racing on sand was an entirely different prospect to competing in the mud. 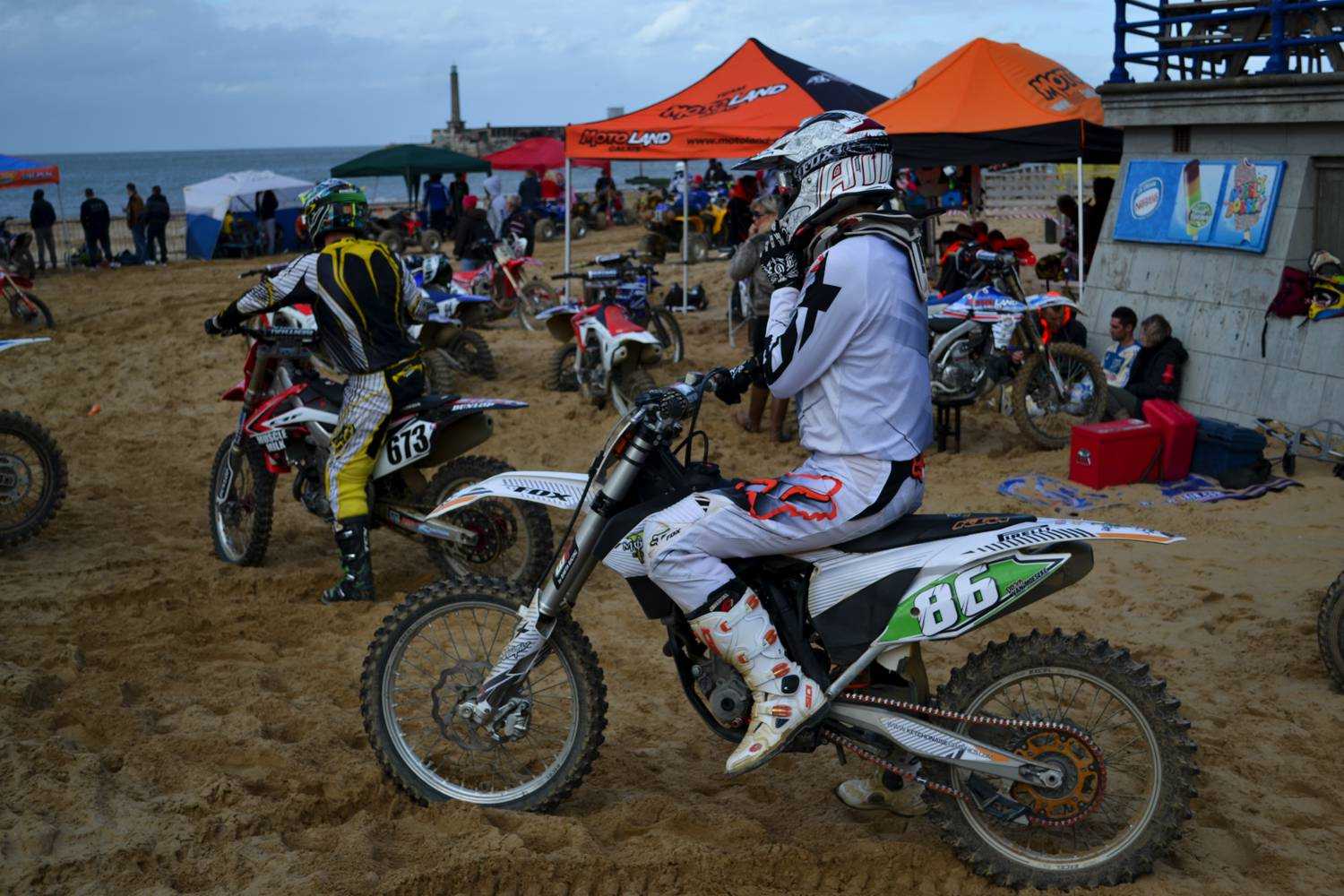 Due to restrictions on beach riding in the UK it seems that riders have little or no opportunity to hone their skills ‘off piste’ and there are only ten minutes practice for each of the classes in the solo sector. Apparently there are better opportunities to be found across the channel, which may explain why, according to the official website, only two of the top ten point scorers hailed from these shores. 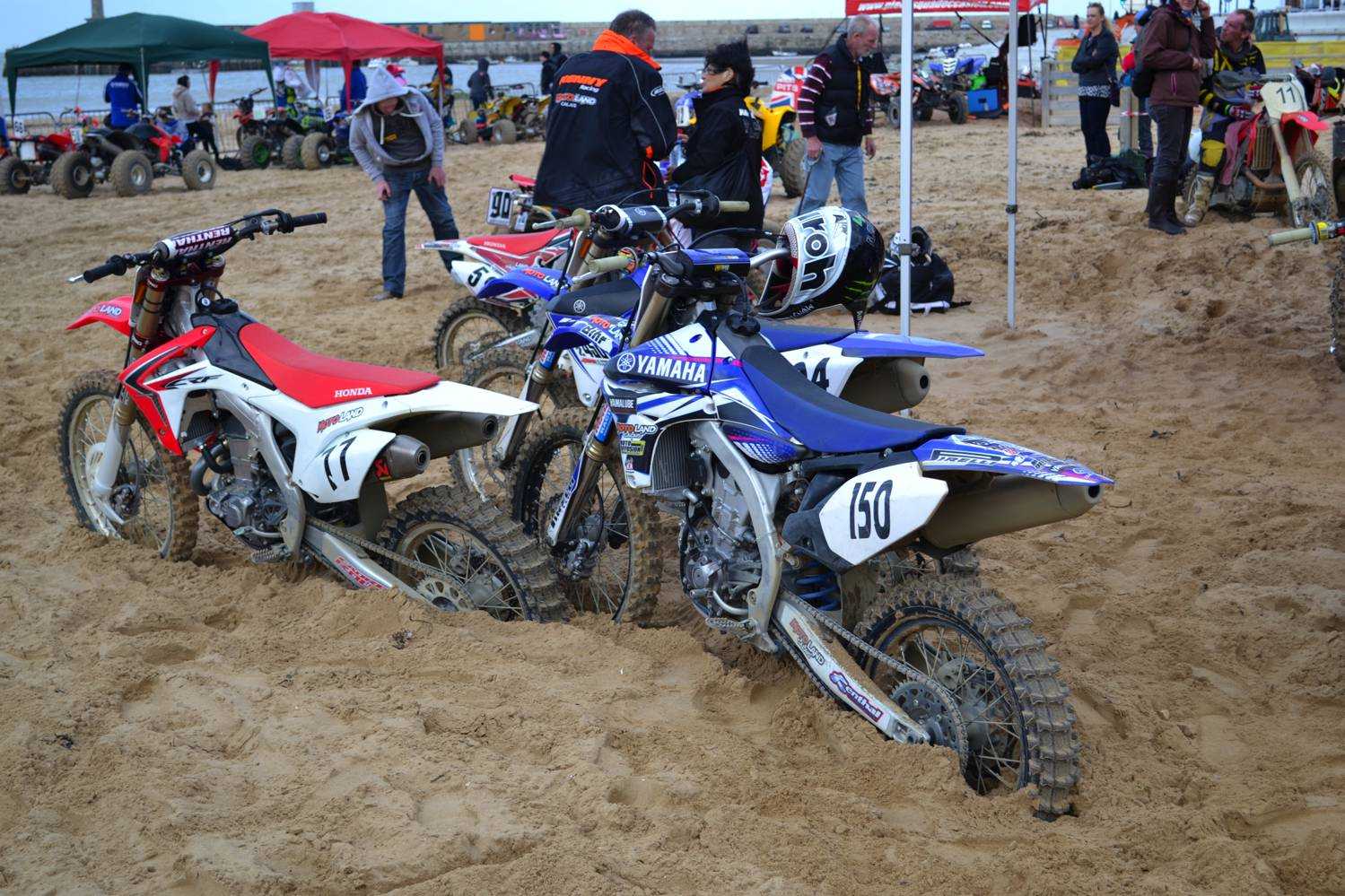 One thing that became clear from the meeting is that Thanet District Council are clearly willing partners to an event that many local authorities might see as encouraging anti social behaviour. Marine Drive was completely closed, and twice a day road closures on the rest of the main seafront road were enforced to allow teams access to and from the main parking area off Belgrave Road. 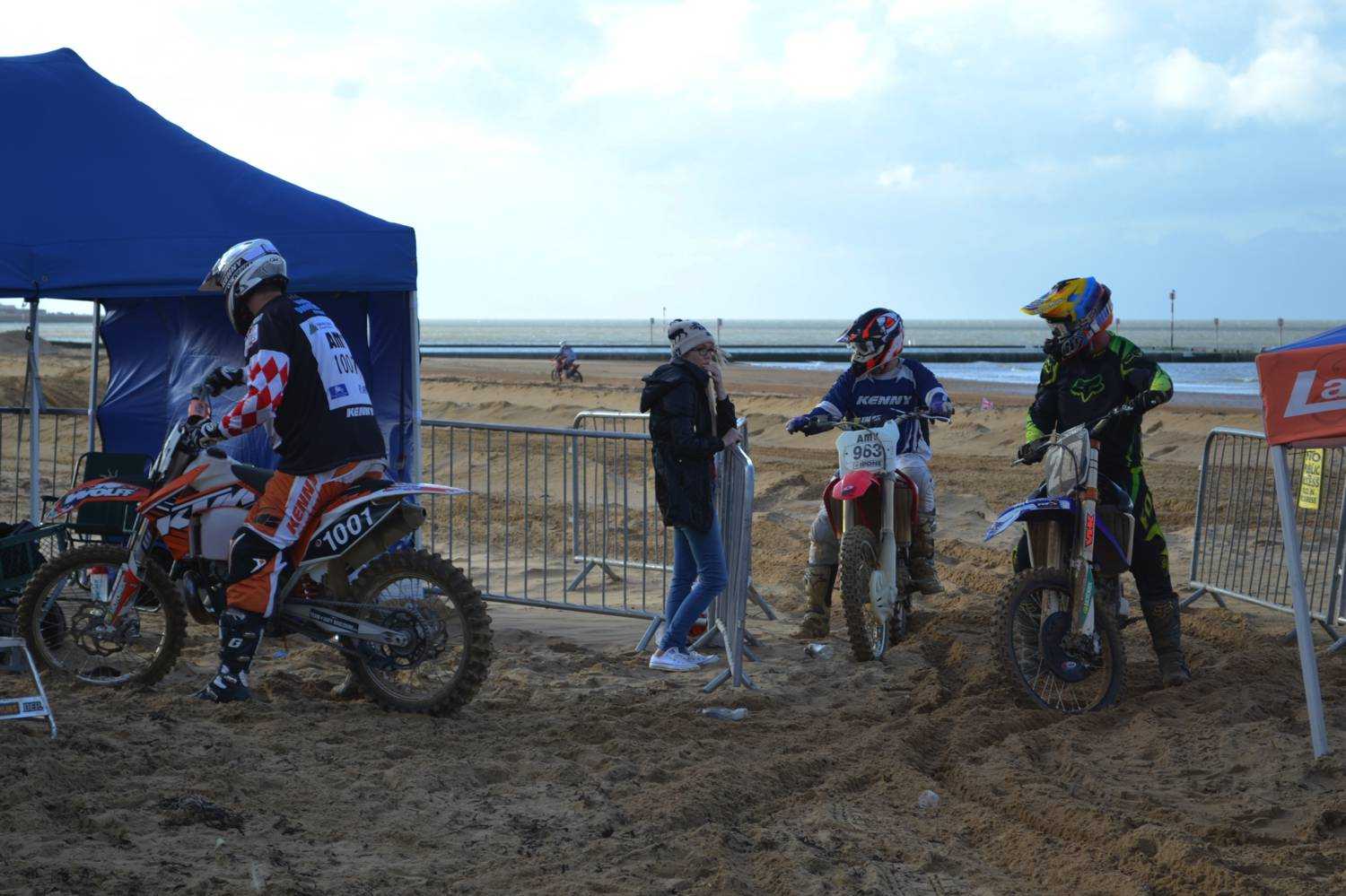 Looking at this objectively it’s encouraging to see a forward thinking council willing to close off its biggest asset to allow people to race motorbikes on it. It’s not quite the Isle of Man, but it’s a big step in the right direction. 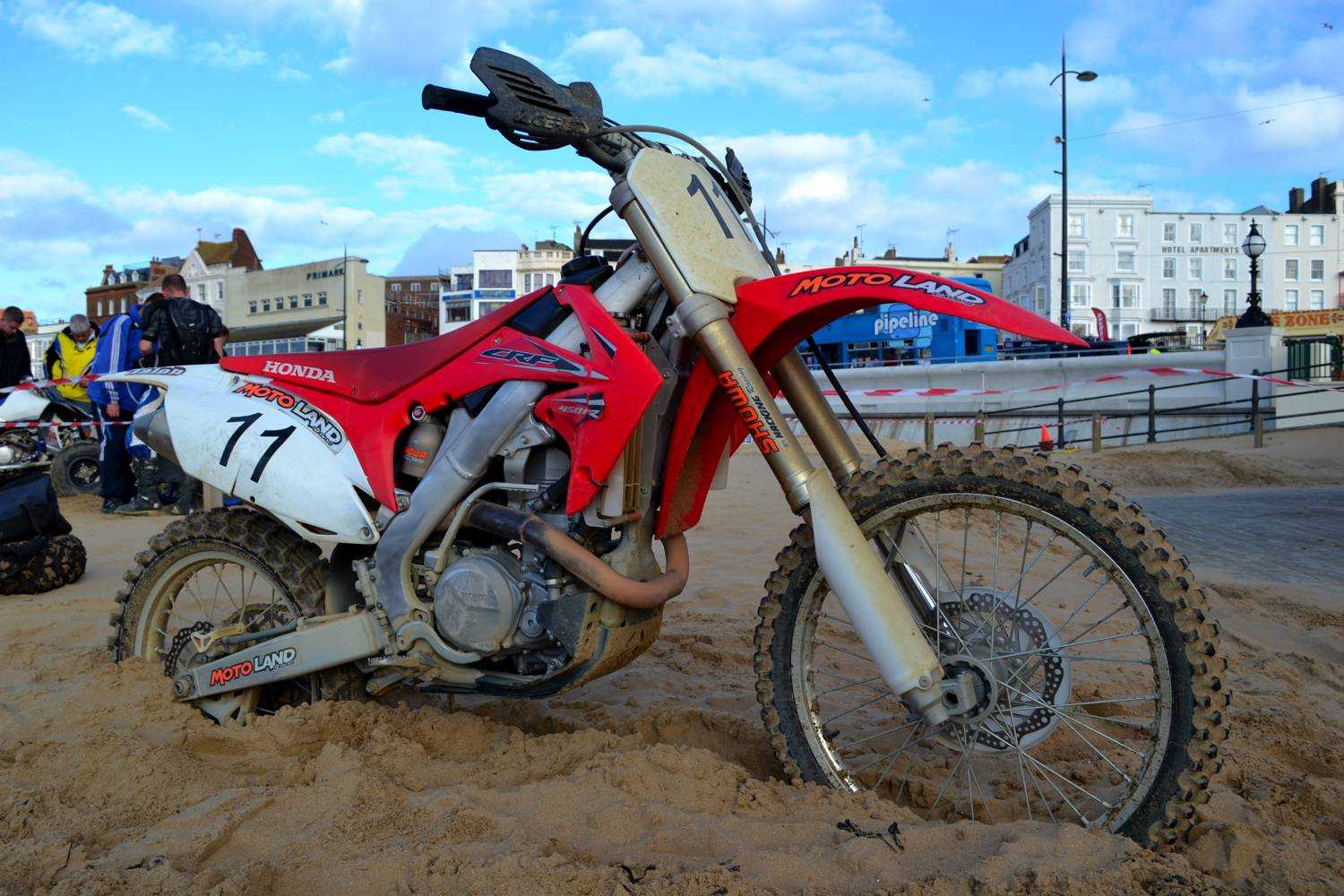 The weather for the weekend was decidedly hit and miss, I was there on the Saturday and while it remained dry the sky was at times overcast, with biting winds coming in off the North Sea. Not that this discouraged the crowds of spectators lining the railings along the seafront, but the forecast for the following day looked less favourable. 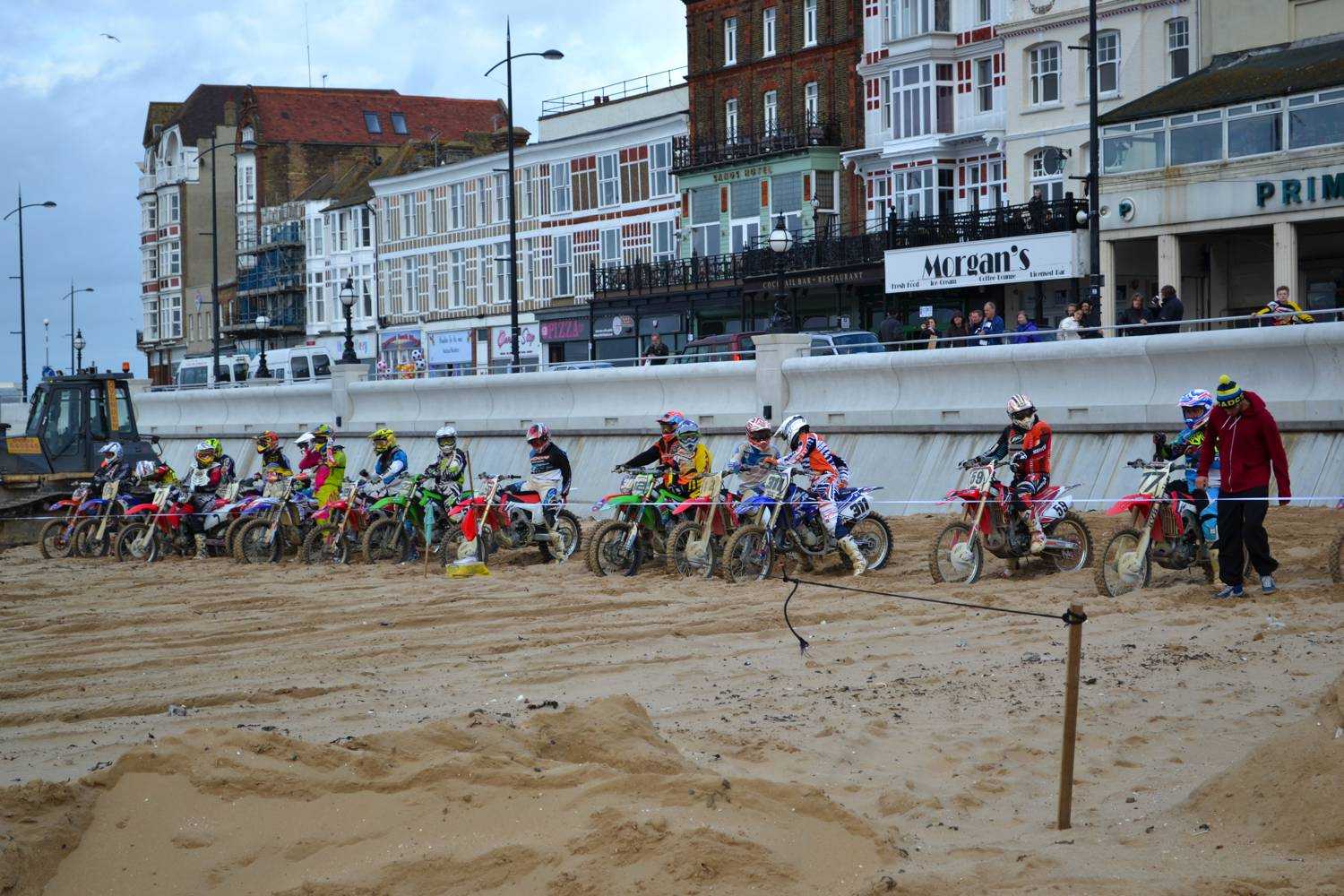 The event clearly brought in thousands of visitors that Margate wouldn’t normally have seen on that blustery autumn weekend and while it would be perfect to be watching the racing in the summer, I couldn’t imagine it going down too well with the punters with hankies on their heads licking their 99s. 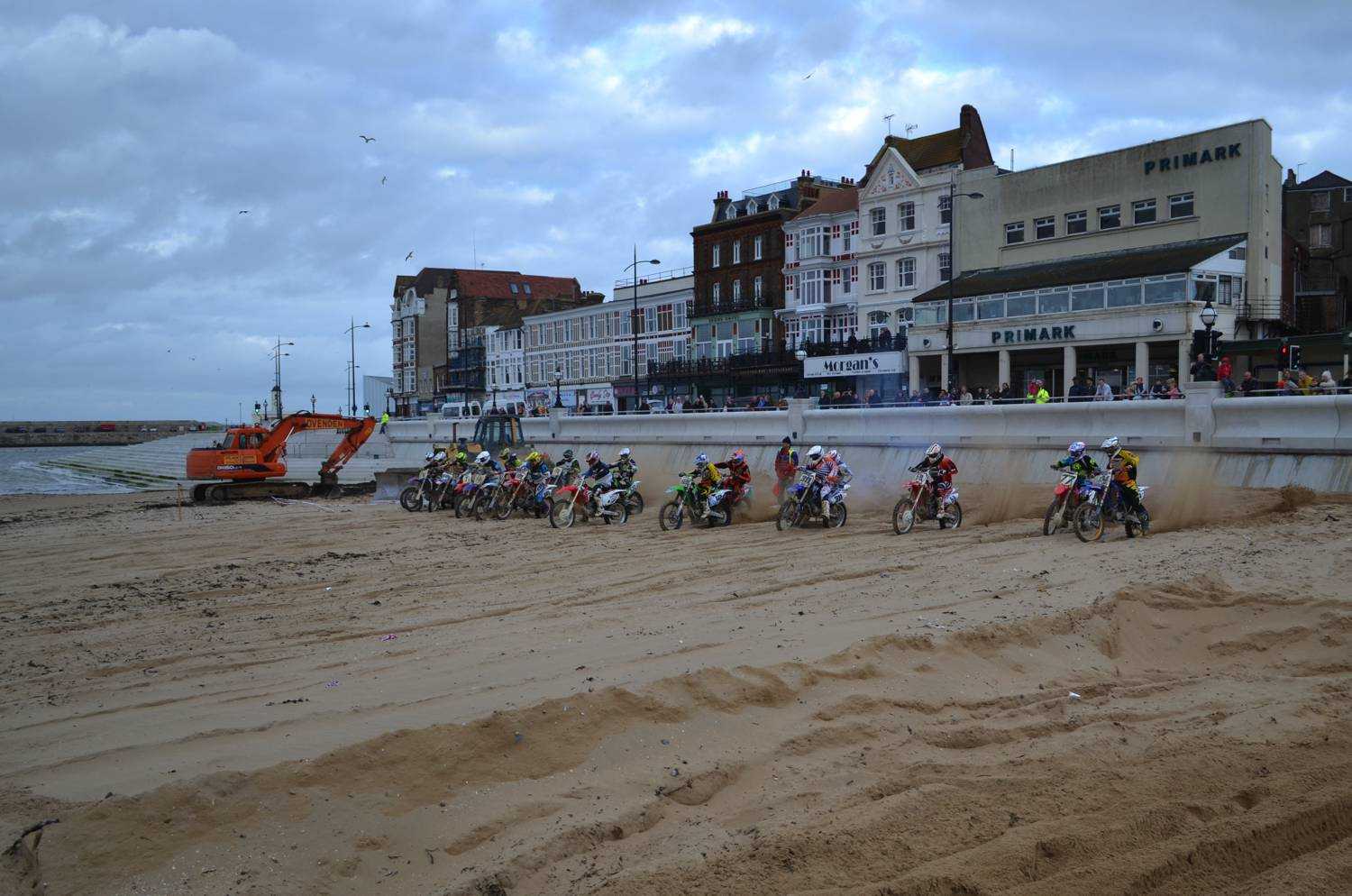 The cafes all seemed to be doing good business, likewise the pubs, and with most of the competitors staying for the weekend I’m sure the tourist trade enjoyed their last hurrah of 2013 without too many complaints about the road closures.

So on reflection, it is actually well worth a visit to Margit. For a start, there’s the famous golden sands. You can still buy ‘Kiss Me Quick’ hats and sticks of rock. The harbour arm end of the beach boasts a great collection of pubs, cafes and restaurants, and for those with a cultural bent the Turner Contemporary also has a café and is free to visit, even though they ask for a £3 donation. 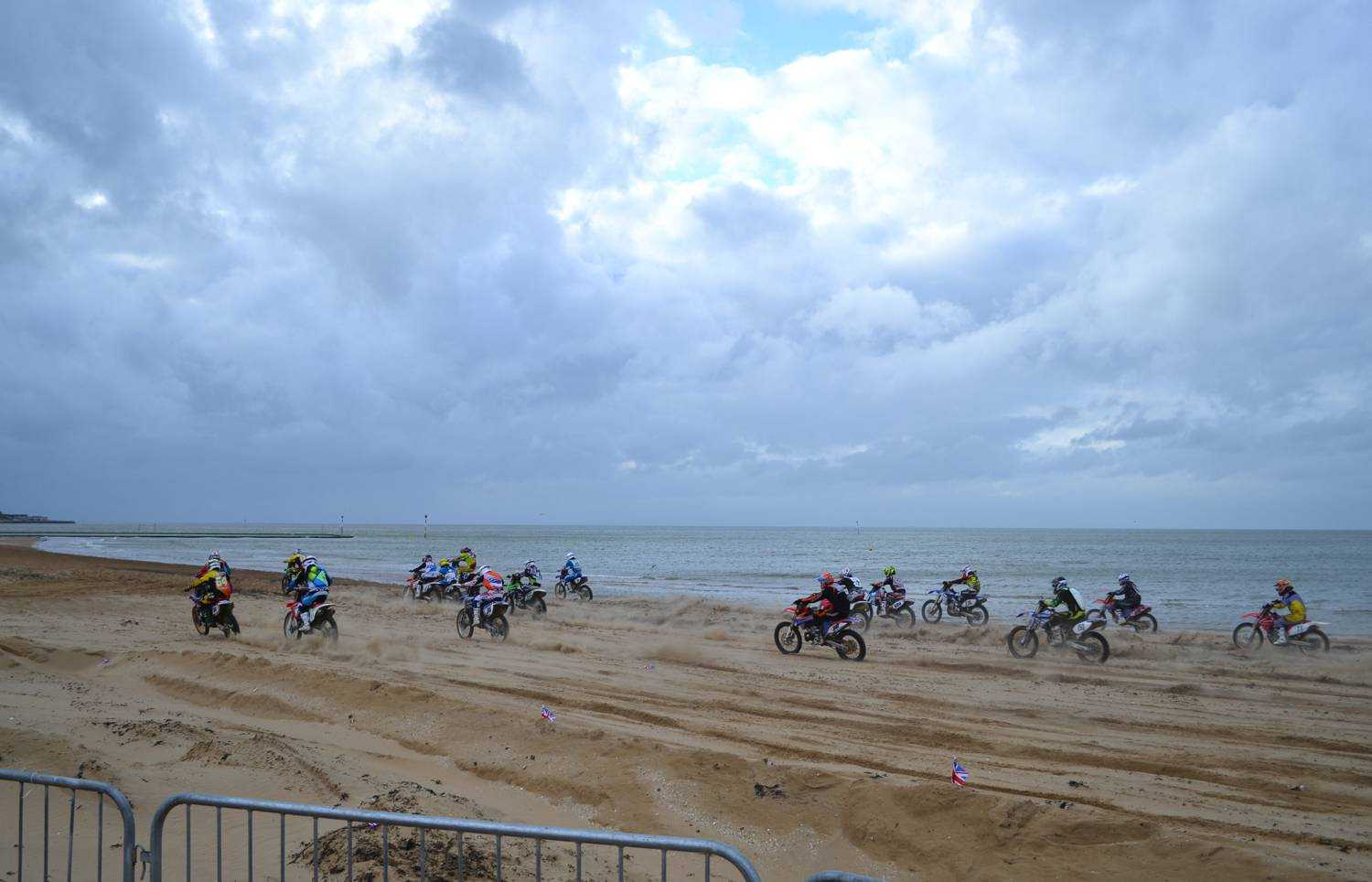 Dreamland has secured funding from the Heritage Lottery Fund and looks set to reopen as a heritage theme park, and you can also visit one of Margate’s best-kept secrets, the Shell Grotto on the imaginatively named Grotto Hill. 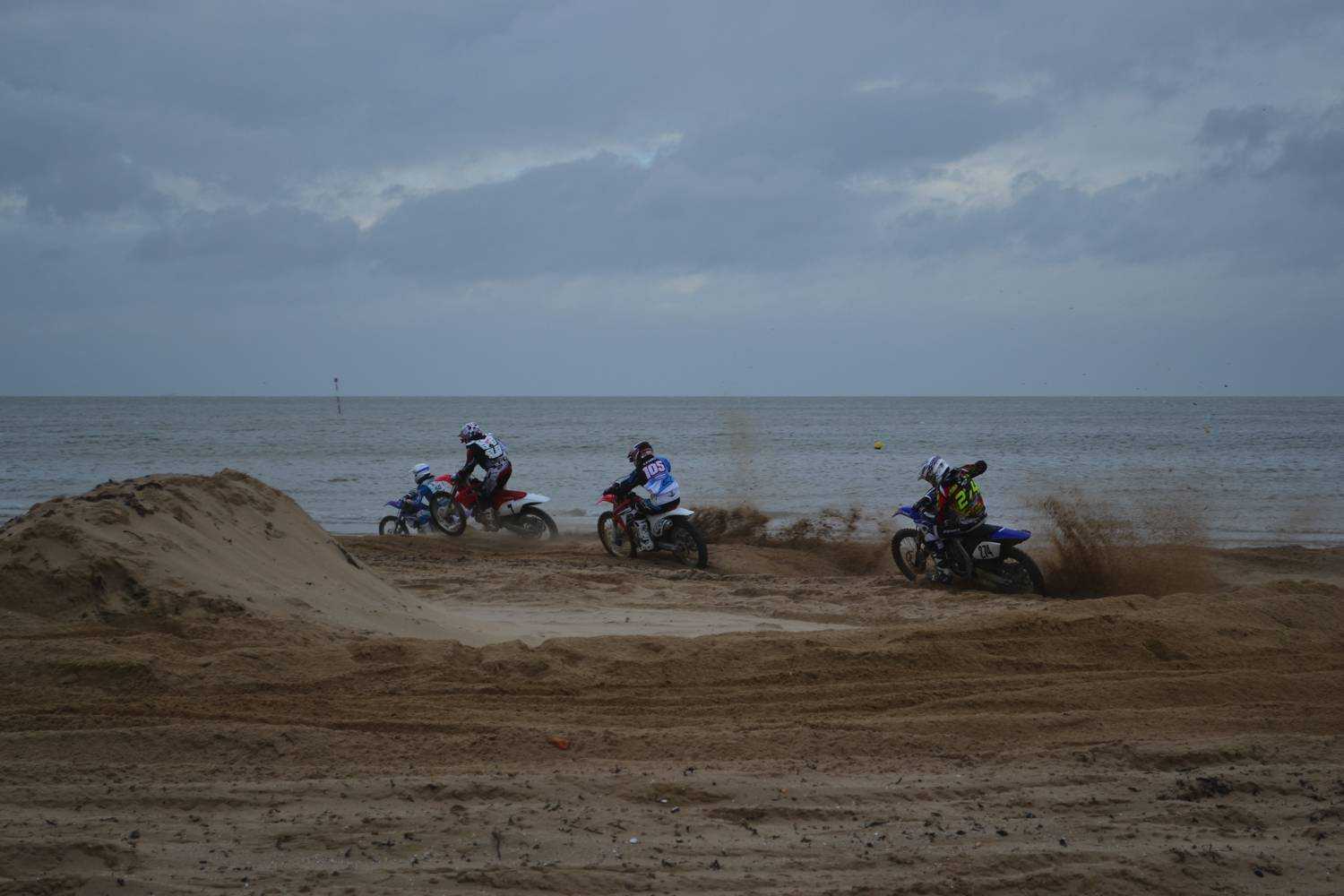 Even if you are still undecided you might like to know that Margate Beach Cross will be happening next on Saturday 8th and Sunday 9th March 2014. It’s all free for spectators and there are plenty of good places to watch the action from.

And you can park your bike for nowt. See you there? 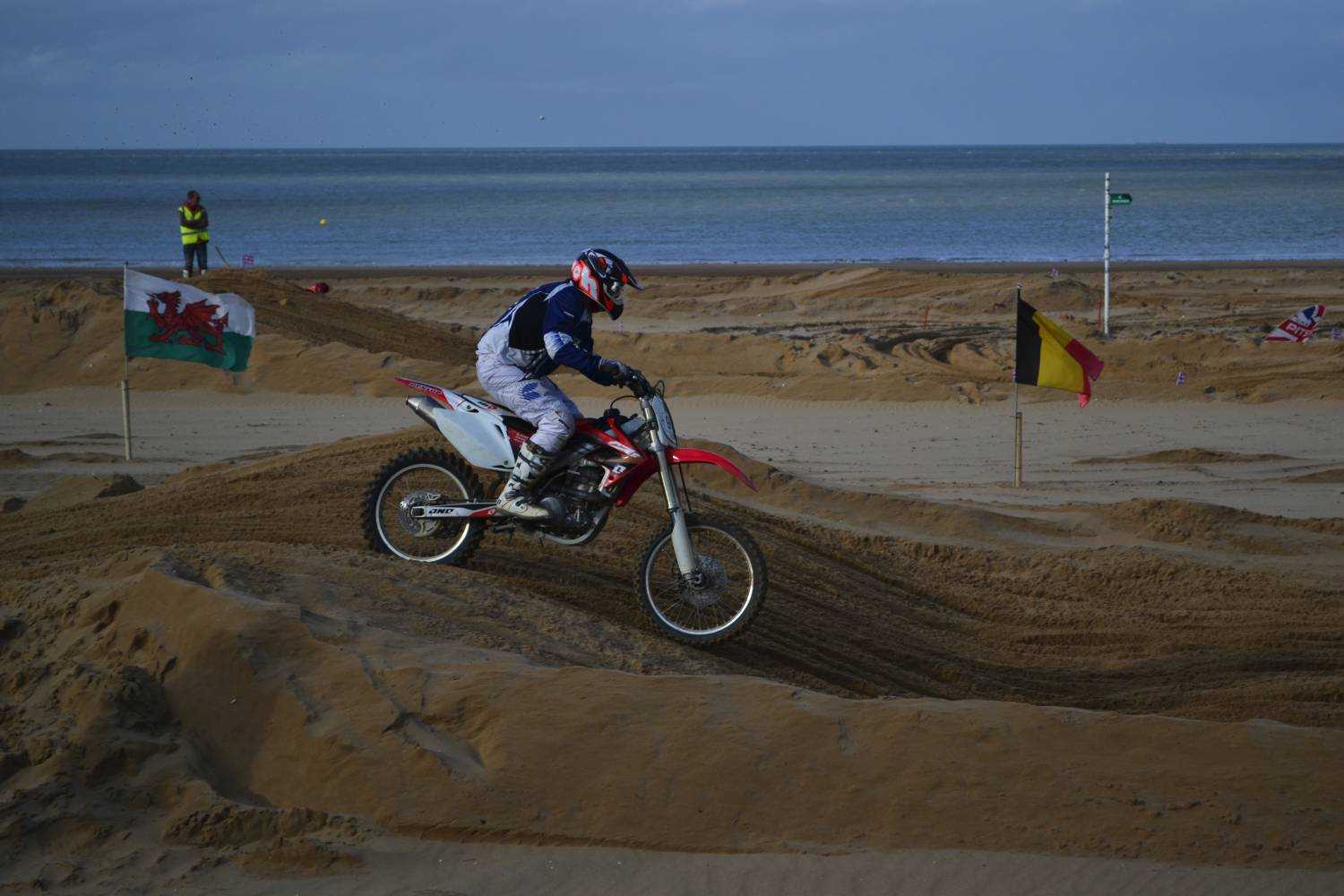 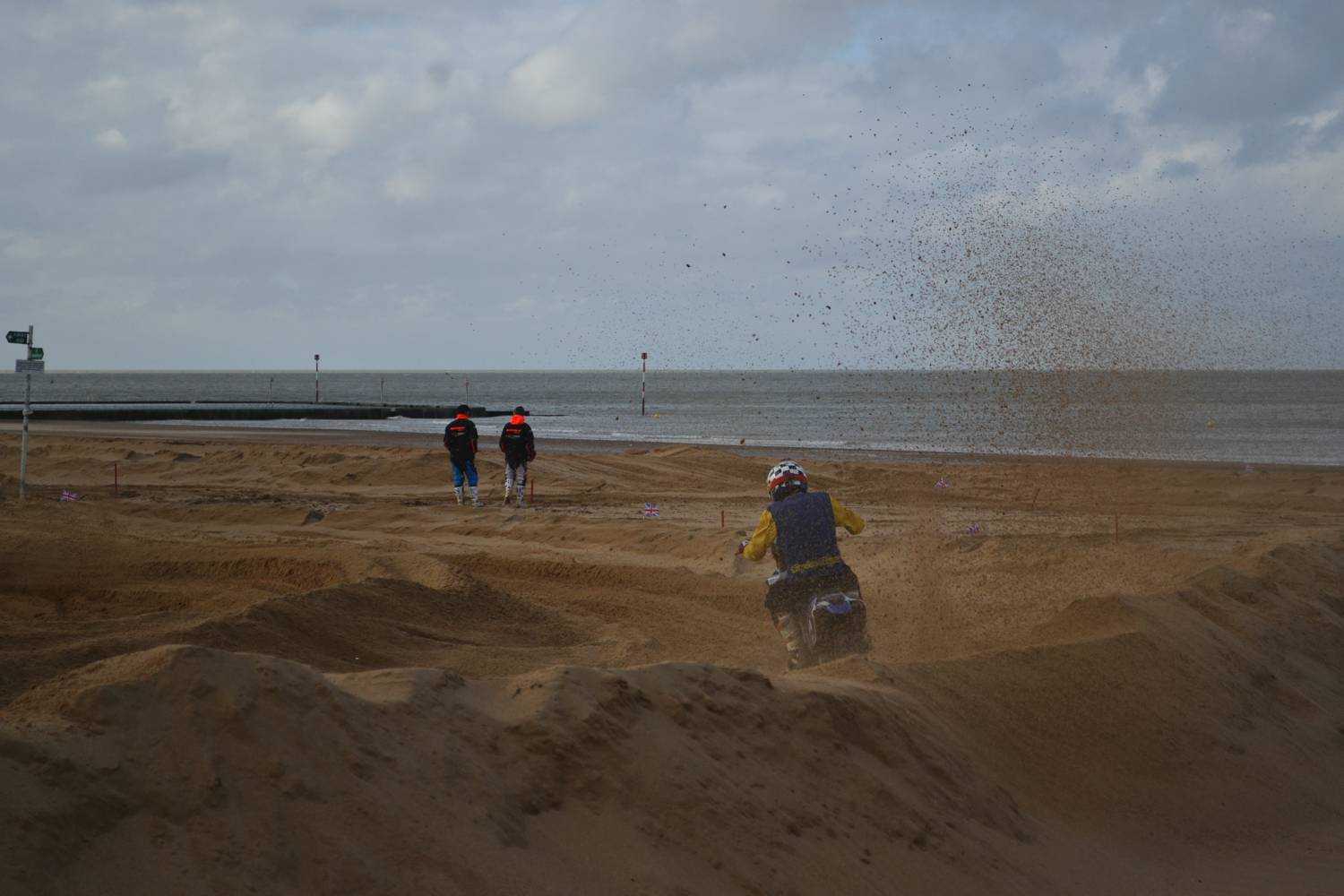 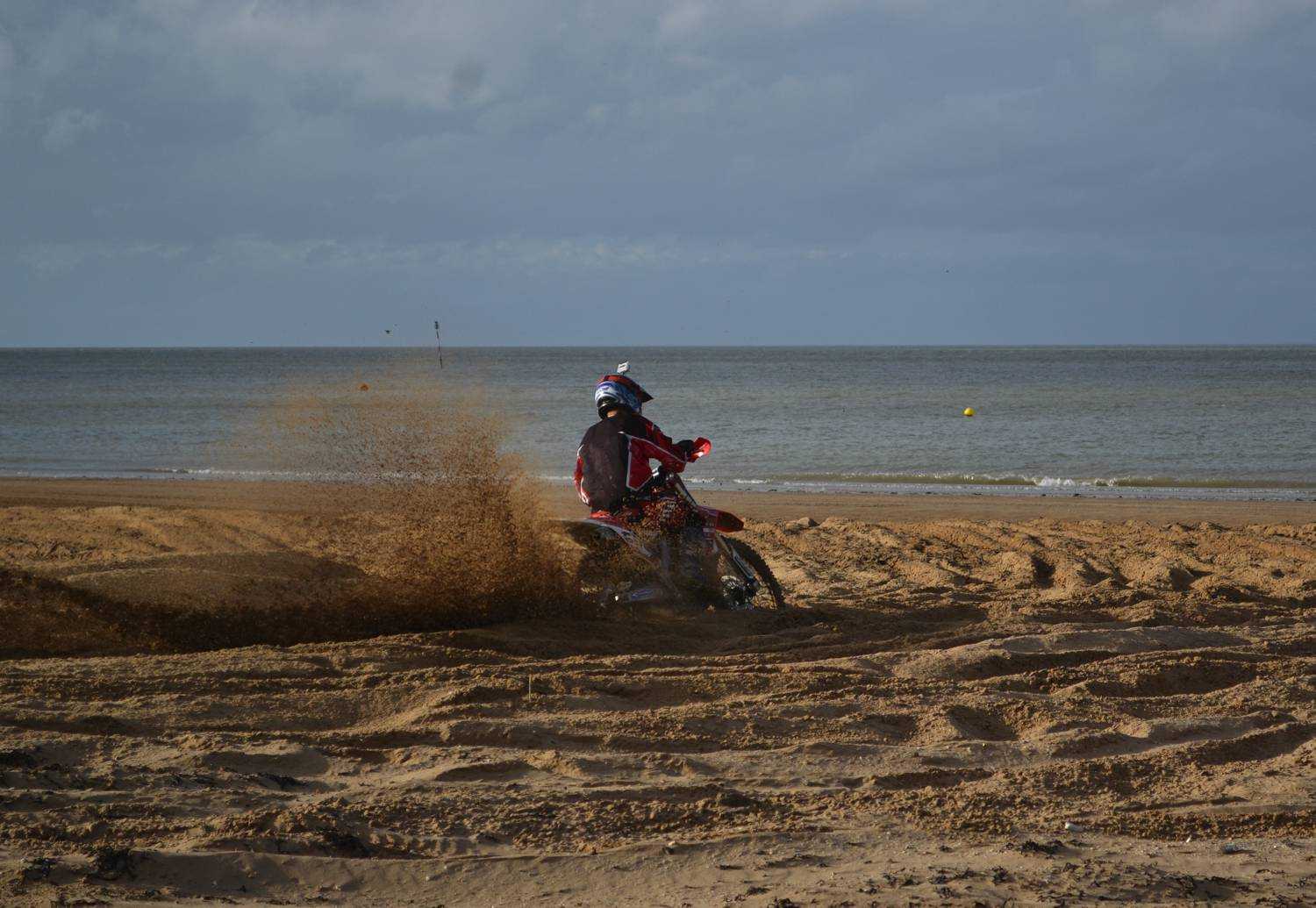 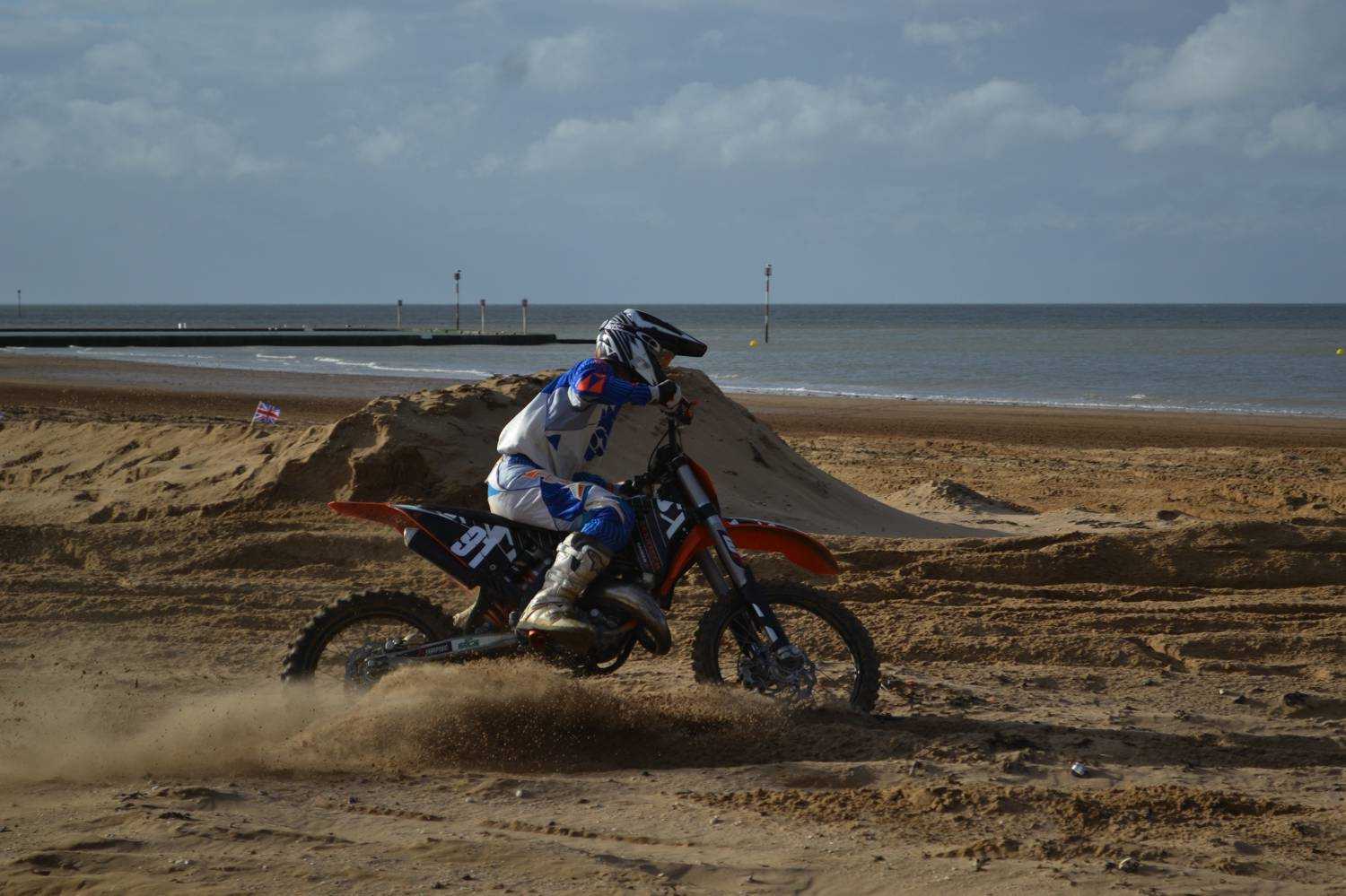 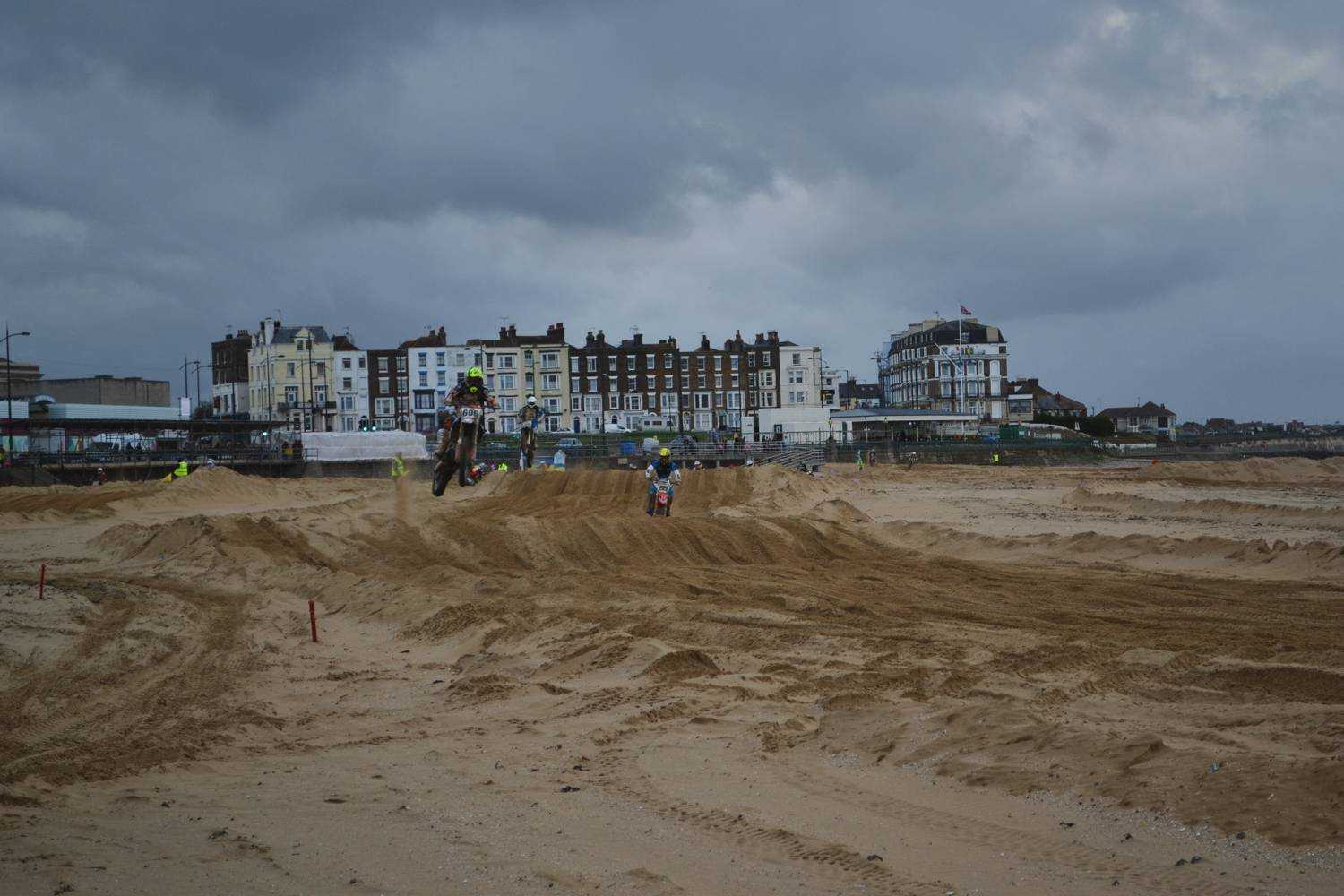