I loved the book review and was chuffed that Ace Times came through it in pretty good shape. In respect of the writer’s observations re Ace Times, on page 188 it incorrectly states that the cafe was opened in 1930, it opened in 1938. Also his reference to “odder still is a section dedicated to the Wall of Death”, the context apparently being misunderstood. The reference is in respect of “Fun of the Fair”, very much part of the lifeblood of youngsters in the 1950’s and 60’s – not only at travelling fairgrounds, but also places such as Margate’s Dreamland and Southend’s Kursaal (and in the Fifties in Battersea Park) were where kids found excitement, bright lights and rock n’ roll – the book Ace Times tells the story of the era and as a history book the fairs had to be included!

Congratulations on the nuptials, now there’ll be some real two way ‘carin’ an’ sharin’… best of luck for the future, and my condolences to your good lady.

By the way, I’ve been meaning to forward these to you to pass on to Blez… a couple of feet forwards for him.

The first one is Tim’s 1925 model ‘B’ Ner-a-car… it’ll be doing Banbury this year along with a couple of his 1920s French bikes… and the second one’s a Cezeta 175cc (I think) not sure what year though… with a Pav trailer (both Czech built).

Thanks for the congrats and the pictures Chris. I forwarded them to Blez, who of course enjoyed them (and had a whole load to say about them) but I thought the rest of the readership might enjoy seeing them too – Ed 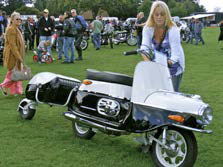 I’m still catching up on the previous issues and I’ve just got up to issue 170. They’ve all been cracking reads so far.

My preferred format remains PDF as I can grab it and read it on my tablet (which hasn’t got 3G so cannot connect when on the move). So please, please, please don’t ever get rid of that format in favour of the html version. In fact where’s the PDF version of the latest issue?

Heartiest congratulations on getting married. May it be a long and fruitful union.

On the second announcement, it’ll take a little while to get used to navigating the HTML site, I’ll try it for a while before I comment.

Whatever you do though, please don’t stop publishing the PDF version, as I need to download the whole magazine, for when I am not in a Wi Fi hotspot.

Am I right in thinking that the Boy Biker is no callow youth, as he has an amazing grasp of the English Language?

I’m still enjoying all of the mag; keep it up.

Thanks for the congrats Alan, they’re much appreciated.

There’s plenty of time to find your way around the HTML site because it’s very much a work in progress. There seem to be a lot of people who like to download the PDF version of the magazine to read later so you will all (including Eddie above) be glad to know that we have absolutely no plans to scrap it even when the new site is fully functional.

As for the Boy Biker, you will be amazed to know that he is precisely what he purports to be. I’m not entirely sure whether he will be 21 or 22 this year, but he is – as you point out – a very mature writer (and you can believe me when I tell you that I have to change less in his column than I do with most of the others contributors) – Ed

Congratulations and thanks for an outstanding May 2013 issue.

I will admit to being chilled by the images of demolished rides on pages 116-117. I worked on the ambulance as a paramedic for nearly ten years and have seen a few nasty conclusions to motorcycle rides myself – unfortunately all too often involving bikes and booze. Working with law enforcement at the scene of head-on collisions, snowmobile crashes, suicides, knife fights and child abuse, you name-it cases has given me a perspective on lawmen that most folks don’t have. My oldest son is a federal agent working for the Border Patrol. Now I have a very different view of anyone wearing
the shield.

The image of all those police bikes was fascinating and in particular the white Triumph patrol bike on page 109.

I’m enclosing an image of one of a pair of 1967 Honda CP450 patrol bikes owned by a friend of mine over here. Very few were imported – about 25 from what we can learn – and this example runs out like new, including the flashers and mechanical siren!

In 1976 I rode to Paris on a Honda 250. After a night in the Bois de Boulougne I fell in love. There, leaning against the ablution block, a factory fresh (for that was the first year) was a Moto Guzzi Le Mans (I still have the grainy photograph). It was gorgeous, even standing still. Back then a £2000 motorcycle was about as achievable for me as Brough Superior is today. Unrequited love tormented me until 1988 when I spotted an ad at the Huddersfield jumble “Moto Guzzi T3 in bits £500”. I bought it, built it, and used PUR 49R for 19 years .

I toured Ireland (more grainy photographs) Californian style. I went to the 24 Heures Le Mans four times. Then, in 2007 I managed to T bone a car while riding my Cagiva Raptor (another V Twin) way too quickly. Fourteen weeks on my back gave me plenty of time to fantasise about my Guzzi and as soon as I was back on my feet I spent time sourcing the bits to make my T3 a Le Mans. When I spotted a Guzzi in a Balham garden with an early VE engine number, I knew that was the mill that I needed and PUR 49R has now evolved into a 1976 950 Le Mans with a nod to the 750 S3 that housed its motor. After 38 years I have the bike I have always wanted and I will be riding it to the Spa classic in July along with three other
Le Mans. 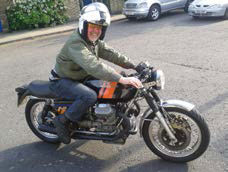 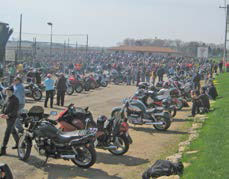 Just to update you, winter did finally give up the ghost here in southern Wisconsin and we had a great turnout for our not-so-little Slimey Crud Run. Here’s a picture of actual green grass and bikes!

I neglected to mention how I enjoyed seeing my letter to you in the May issue! As an aside, spring snowfall records have been shattered here in the upper Midwest including an 18 inch blast that hit northwestern Wisconsin on this very day!

Fortunately, here in Lone Rock, we have been spared and staining my deck, fence and other yard work have been done in relatively normal spring weather and I enjoyed a ride to the Mississippi River Sunday in 80 degree warmth.

Yeah we know Gary (anyone would think you were our only Wisconsin reader!), Dave already told us, he even sent a picture! – Ed