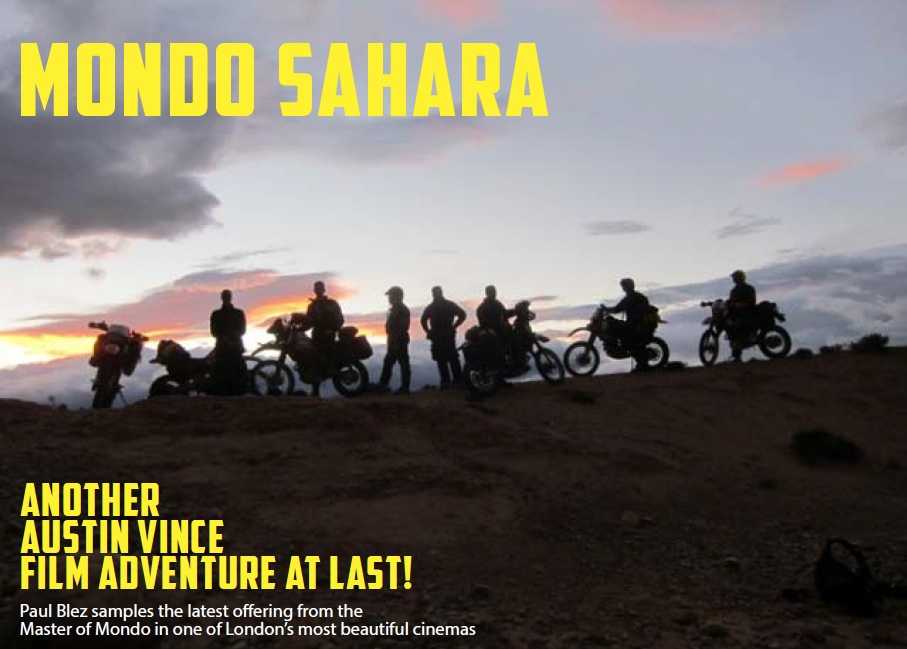 If you’ve never heard of Austin Vince, or Mondo Enduro, you’ve been missing out. Way back in 1995-1996 Vince was the driving force behind a completely unsupported, unsponsored ride around the world with his brother Gerald and five of their friends, on a fleet of unsuspecting and ill-prepared Suzuki DR350s. They made a great and now legendary documentary video as they went along (and later wrote a book about it). That documentary eventually got onto the Discovery Channel, where I vividly remember watching it some time in the late ’90s. Austin and Gerald did it all again in the 2001 Terra Circa adventure, and finally conquered the ‘Zilov Gap’ in Siberia, which had painfully defeated them in Mondo Enduro, when they’d ended up having to put the bikes on the Trans-Siberian train. They were pioneers of that route along ‘The Road of Bones’ to Magadan on the far eastern edge of Russia, before continuing their circumnavigation of the globe and once again, they documented their adventure on film.

Charley Boorman and Ewan McGregor saw the films and their support team thoroughly ‘picked the brains’ of Vince and co. before retracing their route across Siberia in their Long Way Round expedition of 2003 on overloaded BMW GS1150s with support 4x4s. Unfortunately they somehow forgot to give their fellow countrymen the acknowledgement they so richly deserved in their own film and book and in contrast to the Terra Circa team, they put the BMWs on the train for the toughest section of the route… Nevertheless, Mondo Enduro and Terra Circa remain landmarks in adventure motorcycle film-making.

I didn’t meet Austin until the mid-noughties, through our mutual friend Sam Manicom and was delighted to discover that not only is he great company but he’s also one of the most entertaining public speakers you could ever hear talk, whether it be about motorcycles, spaghetti westerns (another of his passions), or anything else under the sun.

Two years ago, the slightly less sylph-like and now silver-haired as well silver-tongued Vince concocted a new Mondo adventure in which he and a different group of friends set out to prove that you could squeeze a quart-sized adventure into a pint-sized, four week pot of time with little more than a ten bob budget.  This time he and six British and American friends used a pack of ten year old Honda XR400s to ride from London to the sands of Morocco and Mauritania. As if it wasn’t already masochistic enough to use motorcycles with no electric start, they found themselves riding off-road across Spain in some of the worst winter weather the country had suffered since Generalissimo Franco was the madman in charge of the place.

Once more, Vince filmed the whole thing, virtually single-handed, and last month there was a memorable gathering of adventure motorcyclists and associated press and industry people at the wonderfully ornate Coronet Cinema, Notting Hill, for the première of the new film, Mondo Sahara. The evening included a heart-rending short film about the charity Interburns and over £1700  was raised for that very good cause. Interburns co-founder Dominique Navet Potokar was almost overwhelmed by the generosity of the support and had to be supplied with a large carrier bag in which to stuff all the cash – she hadn’t thought to bring anything with her to put it in!

After the screening, three of the seven Saharan Mondo-men joined Austin for an entertaining Q&A session: Paul Castle, Gabriel Bolton and James Duveen. The audience was was like a ‘Who’s who?’ of adventure motorcyclists and amongst many others included Chris Scott, Sam Manicom, Paddy Tyson and Nathan Millward. A host of press, trade and industry people were also present from Overland, Trail Bike Magazine, Adventure Bike Rider, Horizons Unlimited, Jupiters’ Travellers, Vines of Guildford, Rally-Raid and Kriega (amongst others) along with the illustrious editor of The Rider’s Digest and his wife. Other adventurous riders included Craig Carey-Clinch and Barbara Alam of the charity Motorcycle Outreach, Ian Mutch of MAG and Ross Noble, the well-known and very long-haired Geordie comedian (who is an extremely serious and enthusiastic off-road rider). Former Lib-Dem MP, biker and ‘cheeky boy’ Lembit Öpik was also present. Austin very generously supplied a free bar, but then ensured that it ran out slightly prematurely by drinking a very large proportion of it himself.

The only slight downer was the poor quality of the projection, especially in such a wonderful cinema. It turned out that Austin had only discovered an hour beforehand that while the Coronet has wonderful equipment for showing traditional celluloid films, their gear for projecting from a DVD was only car-boot quality and the projectionist was barely capable of operating it. Fortunately I had seen an earlier version of the film at the Adventure Travel Film Festival a few weeks earlier, so I knew that there was nothing wrong with the actual footage or the DVD itself.

The only other regret about the evening, especially for Austin, was that his equally adventurous wife, Lois ‘On the Loose’ Pryce could not be there. Lois was actually in Iran, having ridden all the way there alone on a Yamaha TTR 250 (I’m pleased to report that she has since returned safe and sound). Regular readers will recall that Lois gave the keynote speech at the IJMS conference (which the editor wrote about in issue 181 last August) and scared us all to death with stomach-churning tales of her solo adventures in Africa.

For the record, I electro-cycled up to the event from the south west London suburbs on an A2B Metro ebike, which meant I was able to park and lock it with the pushbikes right outside the front door of the cinema. As you can see from the photo, Ross Noble wasn’t entirely convinced by the machine, but then he didn’t actually ride it either! It got me from the wilds of Ham to Notting Hill Gate via Barnes, and back via Chiswick and Richmond on a single charge. And I did the return journey in exactly 30 minutes without breaking sweat! Don’t knock it till you’ve tried one!

I was glad that I bothered to take my best camera, complete with EffOff flashgun, because, upon arriving, I found myself designated by Austin as chief photographer of the whole event!

In an unprecedented burst of long-overdue publicity Austin Vince was featured in the aforementioned TBM and ABR magazines in October and had a self-penned story about the adventure in BIKE magazine, all in the same month!

The DVD of Mondo Sahara, complete with a 20 page booklet of sleeve notes, was released on October 27th through Amazon, for £18. It’s a sign of the times perhaps that when asked whether it would be sold through any dealers, Austin replied, “It’s not worth it – anyone who wants it will just go to Amazon anyway”.

More on Mondo Sahara HERE, including great clips from the film and its top soundtrack