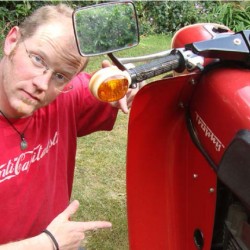 It’s often the case that legislation emanating from Europe appears to have a commercial interest. You may remember that compulsory ABS on all bikes and scooters was something a German MEP called for, because the Bosch factory that made ABS was in her constituency. She was one of the MEPs on the committee (IMCO) that was steering the Euro Parliament to accept the Type Approval legislation we were fighting last year, but she was also the MEP who had the responsibility for leading the second largest block of MEPs (Socialists and Democrats, 190 of them) in the EU Parliament, on the subject of compulsory ABS for bikes.

It’s not always easy campaigning against the might of multi-national business, but riders groups in Europe did their best.

What occupies us now, are the EU Super MoT proposals, or Road Worthiness Testing (RWT) and would you believe:

“I think some ineffective measures are used as a result of successful lobbying from commercial interests. This certainly applies to RWT”

This is a statement from Rune Elvik. He’s Professor of road safety studies at Aalborg University (Denmark) and Lund University (Sweden). His main areas of research include evaluation of the effects of road safety measures, research synthesis by means of meta-analysis, and cost-benefit analysis. Since 1994, he has been Chief Research Officer at The Institute of Transport Economics (Norway) in charge of risk analysis and cost-benefit analysis. He’s not therefore, some paranoid loon, rather someone who really is at the sharp end of understanding road safety.

But since the Super MoT legislation was drafted we’ve seen even more commercial involvement. The MEP committee tasked this time with advising the EU Parliament (known as TRAN) held a public hearing on 22nd January and refused to let anyone representing riders speak. In fact almost all of those who were invited to give evidence were in some way involved with the RWT industry.

All these recommendations run counter to the decisions that all the national governments have already made.It seems funny that the individual countries who have all sorts of other horse trading going on in the background can still see the sense on this one and are supporting the citizens, whereas the MEPs, who are meant to directly represent us, aren’t!

But don’t worry, it’s not all of them that are being led by the nose. The responses to the lettersMAG (UK) members have written their MEPs on the subject, are coming thick and fast.

It appears that the Conservatives are supportive of our concerns, which broadly mirror those of the British Government and the EU Council of Ministers.Jacqueline Foster MEP is a full committee member of the Transport and Tourism Committee (TRAN) and she has so far been the voice of reason, regarding the supporting evidenceas insubstantial as it’s all from the RWT industry and that the costs that would be incurred by both states and citizens, for very minimal benefits, would be too high.

The better news (sort of) is that the UK Green MEPs have responded in a reasonably supportive vein on the subject of the Super MoT and they are members of a larger group of MEPs (59) than the Conservatives.

Keith Taylor MEP (S.East) is not a TRAN member,but letters have piqued his interest in the subject such that he will attend the TRAN Committee meetings at the end of March in Brussels, which will also be attended by MAG UK’s General Secretary Nich Brown.

Our Labour MEPs belong to that big S&D group (190).The chairman of the TRAN committee is a member of this Labour group and his responses seem intent on ignoring our concerns, repeating that the only riders concerned are those who live in countries without anMoT, which is patently nonsense, or he wouldn’t be receiving letters from UK constituents!

Fortunately not all Labour MEPs are taking quite the same attitude and Claude Moraes MEP (London) for example, is stating that testing a bike for its conformity to its Type Approved construction standard is an unnecessary element. This is actually part of the proposal and would be an excellent way to police any modifications that an owner has made.

You see, although we already have anMoT, if this goes through, there’ll be massive changes and the RWT industry will be worth buying shares in!