I’ve noticed that irrespective of whether or not they subsequently make it into print, travel stories often seem to start over a few large whiskies, half a dozen pints, or another suitable quantity of alcoholic lubricant (and in my experience, whenever it is mentioned as a factor in the story, the amount is more likely to involve adjectives like ‘considerable’, ‘vast’ and ‘puke-worthily monumental’, rather than any of their wimpy antonyms like ‘sensible’, ‘moderate’ or ‘insignificant’); well it just so happens that our plans for this summer’s family holiday came about as a result of a much more sober sequence of events. 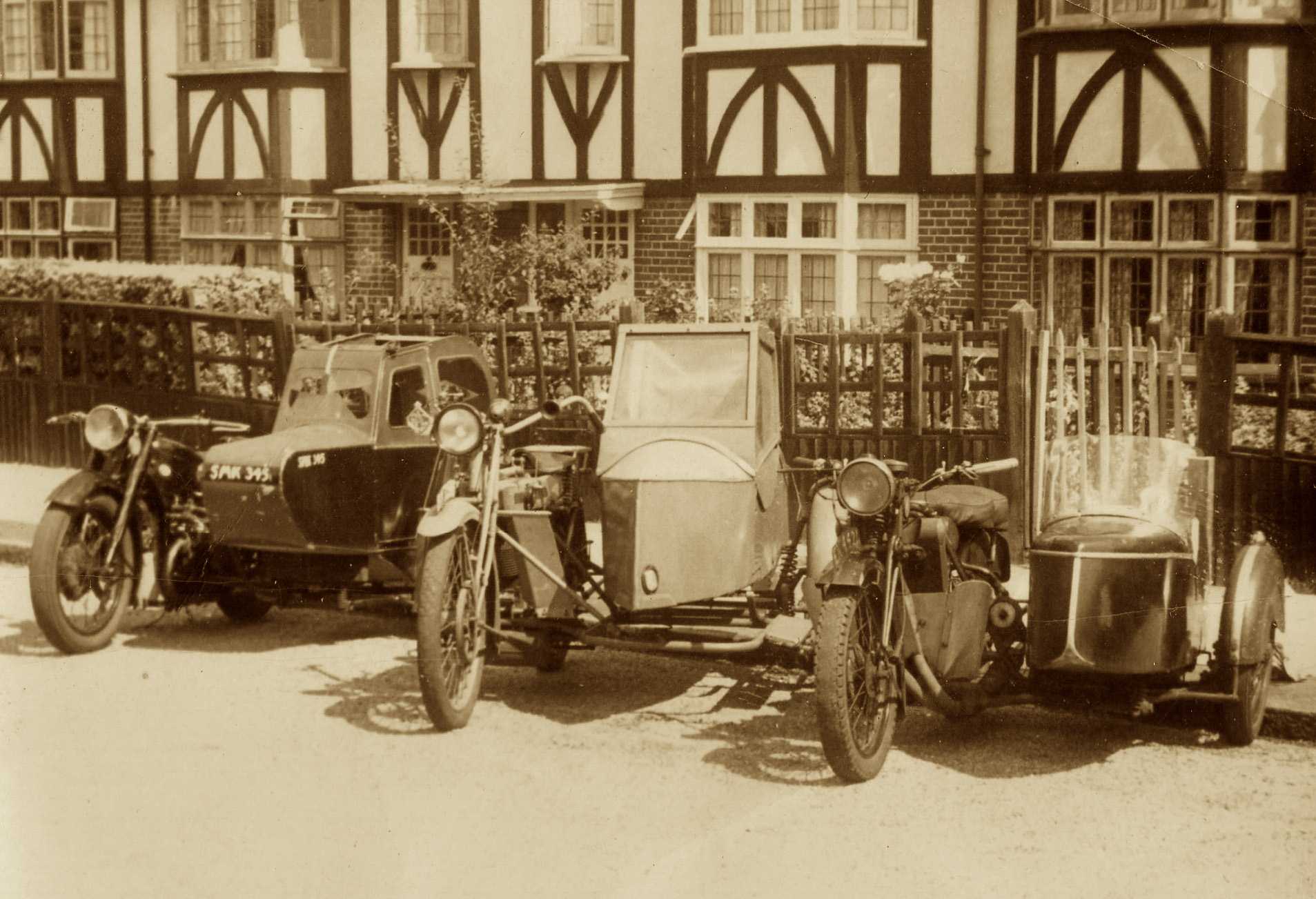 Wendy, my trouble and strife, is one of the hundreds of thousands of people working in the NHS, who have spent the last seven years watching their spending power shrinking, while their workload has steadily expanded (it’s hardly surprising that at times it feels like the entire system is existing on a wing and a prayer).

On top of all that shit, for the last year Wendy has been developing a new project and as it’s a pilot her team is even thinner than the rest of the increasingly anorexic health service, so she’s had to cover many of the shifts herself, which means it’s been impossible for her to take all her annual leave entitlement.

The upshot of Wendy’s arduous schedule is that she’s been forced to carry a week’s holiday over, which prompted her to say how lovely it would be if we had a motorcycle with a sidecar so that we could spend three weeks touring around Europe. How much Mackenzie, our eight year old, would enjoy himself and what amazing memories he’d be left with after a trip like that. 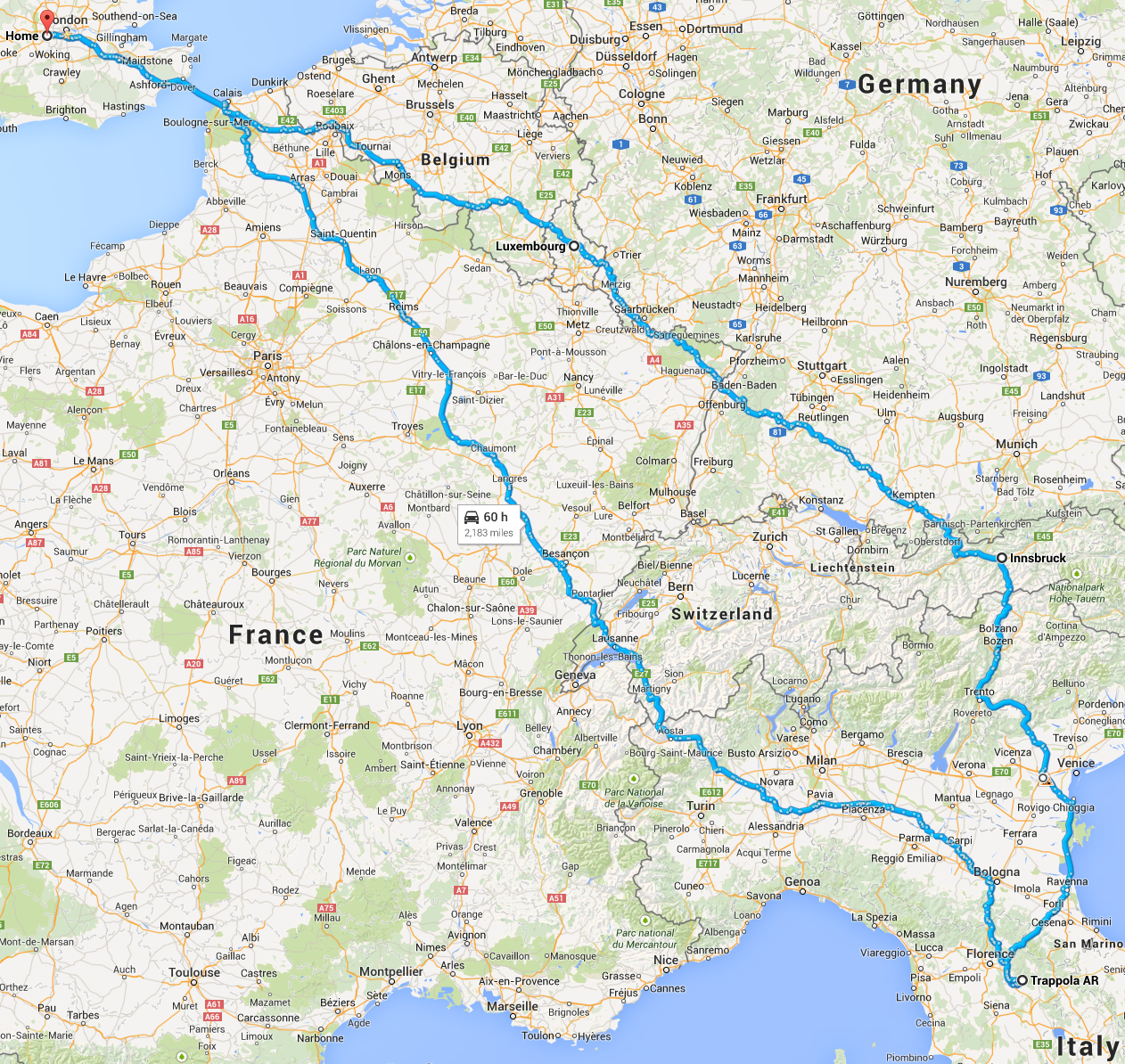 She got ever so excited at the prospect of exposing him to an adventure at such a tender impressionable age, because before he was born travelling had always been a significant part of her life so she is determined to pass the bug on to him. She asked if it was possible to hire a combo for that sort of thing and I had to tell her that I’d never come across anyone offering that service and that even if such a thing did exist, it would almost certainly cost considerably more than renting a big family estate car.

I waited a moment to allow her to watch her dream dissolve before going on, “However… as me and Rod are proper compadres, there’s a distinct possibility that I might be able to sort something out.” Cue broadly smiling redhead with revived fantasy radiating from her eyes.

Digest regulars will be aware, as Wendy was, that when I said “Rod” I was referring to our very own Mr Young, long term contributor and – more significantly in relation to this little tale – owner/operator of Motopodd, the first new sidecar manufacturing company in the UK since the 70s; builder of the colossal Rocket III powered Treble Express and expert fitter of all sorts of appendages to all manner of machines. 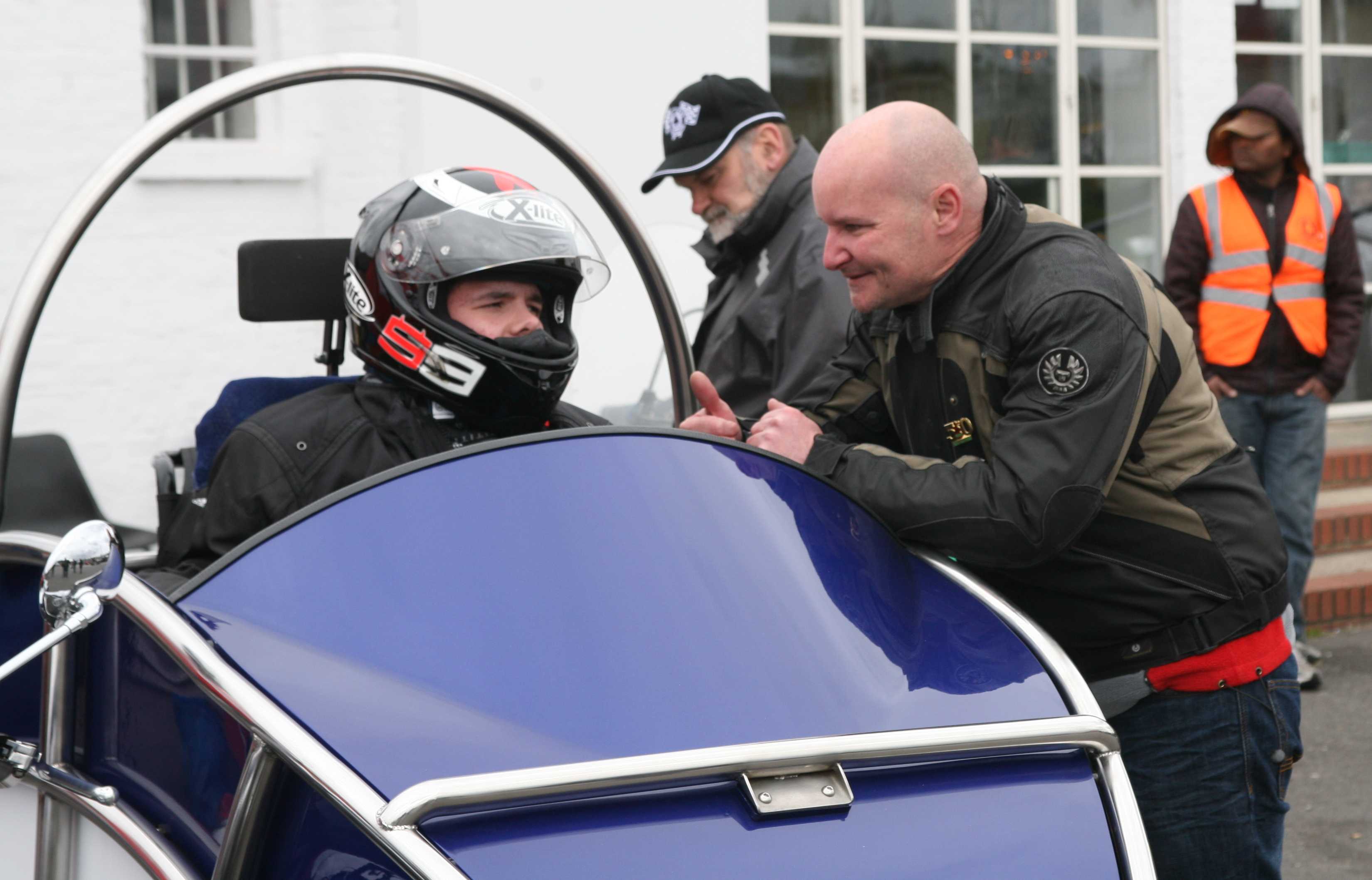 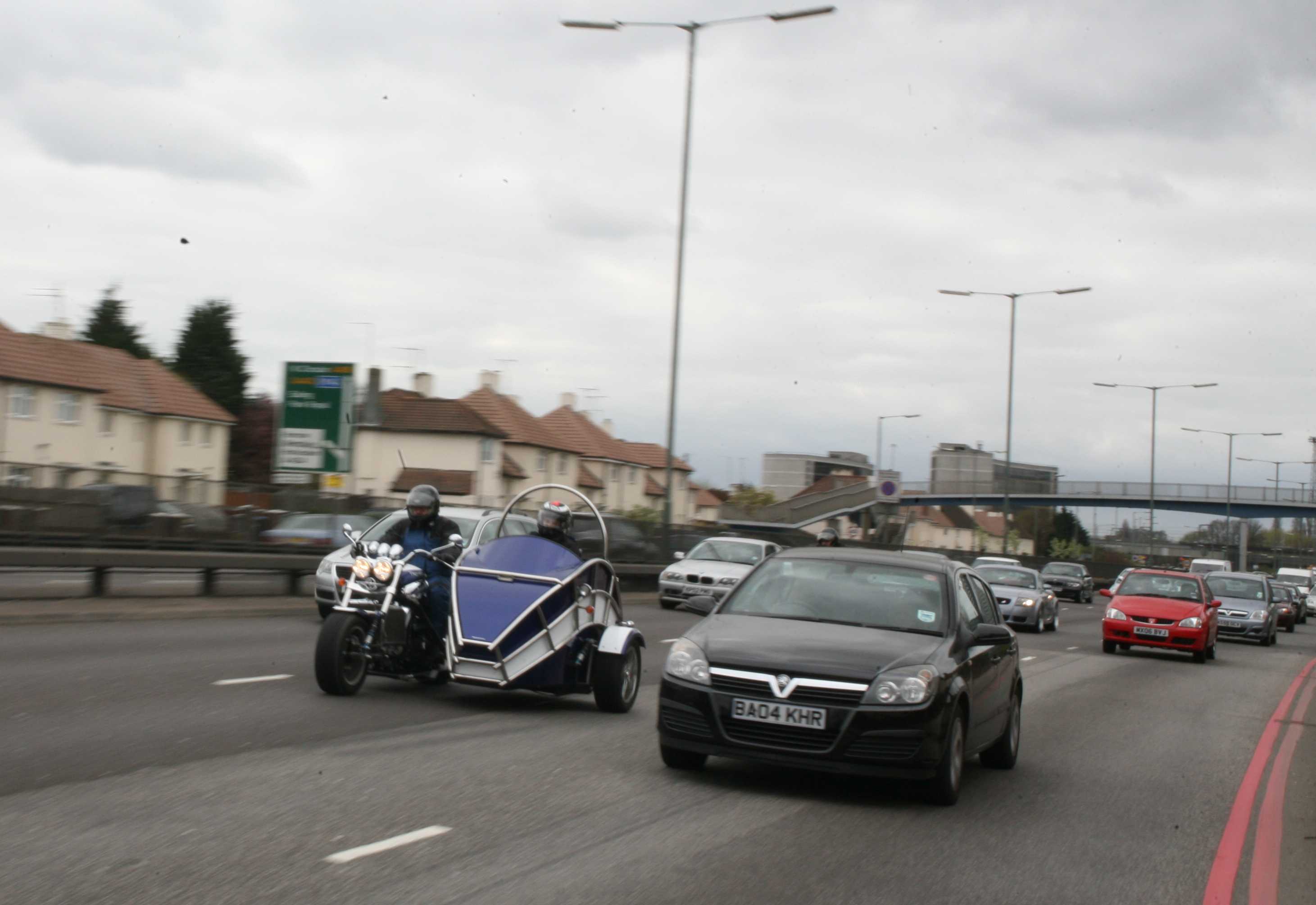 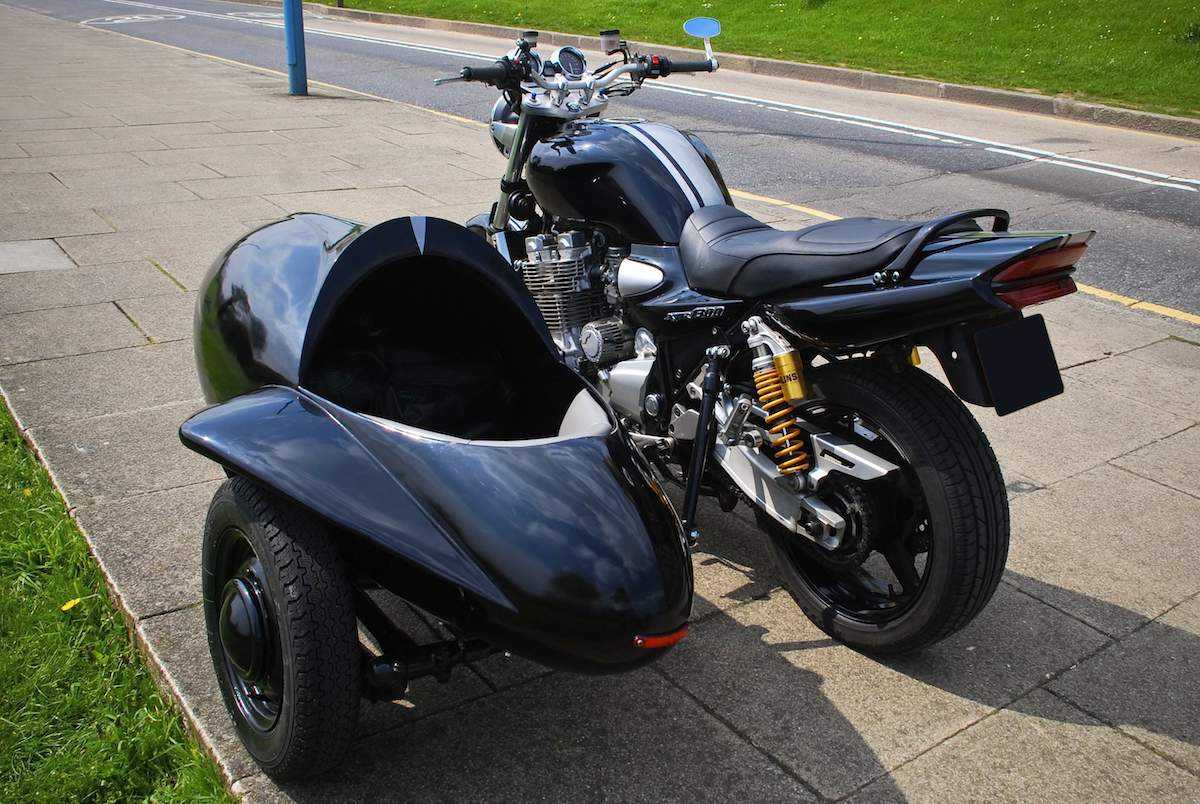 So after a swift exchange of messages where I suggested that we needed to meet to discuss combos and Rod said, “No problem, when and where?” Wendy and I headed out to inner Bucks for a spot of lunch with him and Cheryl. This is where alcohol finally enters the equation but mainly because we were eating in a pub. I can’t really claim that it played any significant part in our plans beyond its usual social function because we’re really not aiming to have a “Cor, how mad are we?” type adventure.

The day before yesterday (as I start writing this on a snowy Saturday at the tail end of January), I was watching Ed March’s latest wonderfully irreverent, childish, but above all thoroughly entertaining and amusing video about his epic journeys on his C90.

In this one “The Dalton Highway“ – adopt butch scary voice – “One Of The World’s Most Dangerous Roads!” Ed and his girlfriend Rach ride up to Prudhoe Bay in Alaska on their C90s, just so that they can turn the diminutive Hondas around and ride the length of the Americas.

Aside from having more fun than many an older more serious adventurer could even begin to imagine, the lovely young couple puncture the pompous ‘it’s all so dangerous’ perspective that is epitomised by Charley Boorman and the chuckle brothers on Top Gear (it’s the angle that the TV punts out time and time again, in spite of the glaring reality that throughout all of their many ‘deadly hazards’, the presenters are being supported by a film crew, drivers and god knows how many other flunkies in the case of Top Gear – Stop Press: who may or may not get punched!) while effectively demonstrating that you don’t need the latest G1200RS or KTM1290 Adventurer with uprated suspension and a shitload of Touratech kit simply to cover some ground. 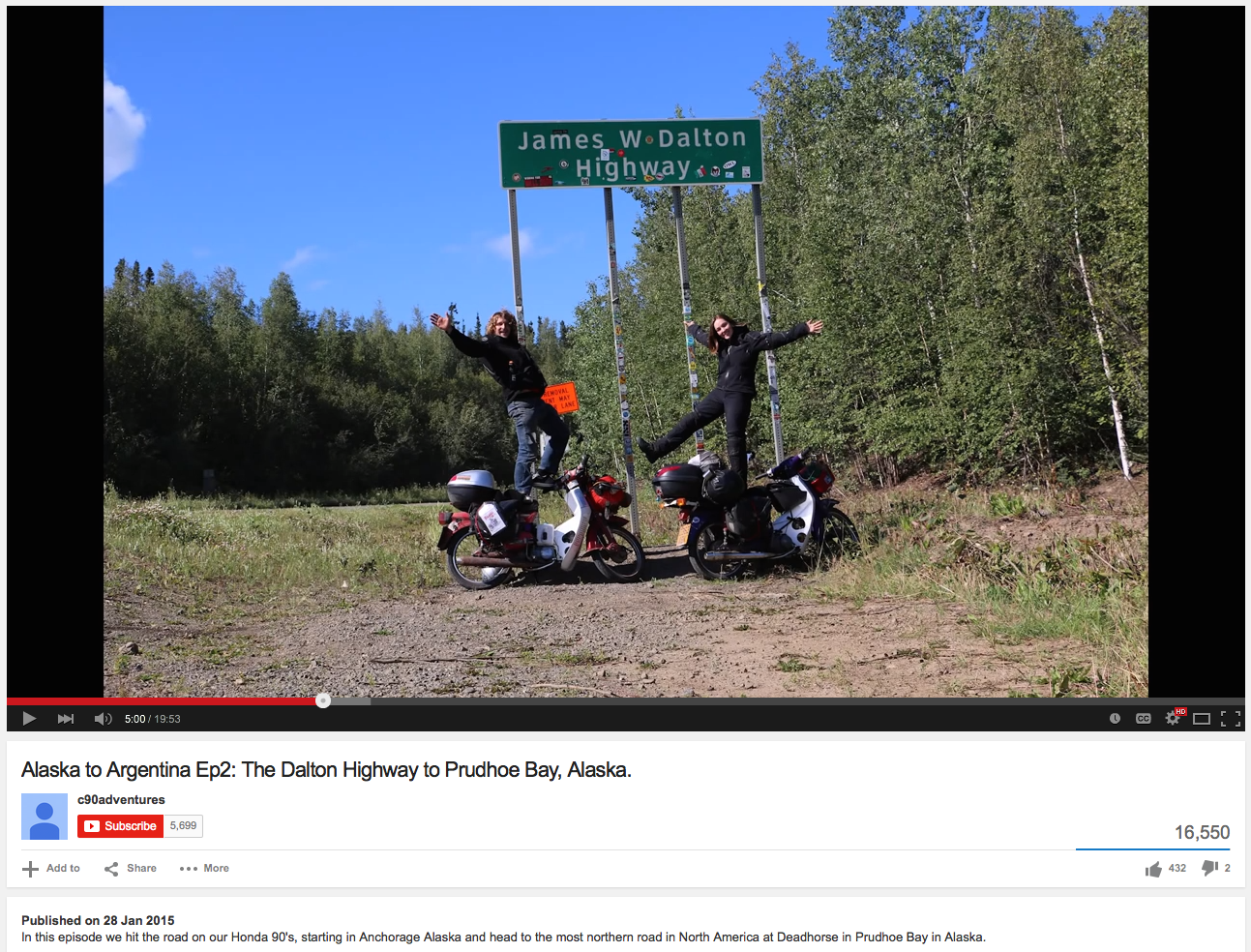 That’s all something of a digression but aside from giving Ed & Rach a well deserved plug, it’s just to say that if two youngsters are willing to tackle thirty odd thousand miles of all sorts, on a pair of old step-throughs, I reckon a couple of ‘mature adults’ should be able to make it across a small chunk of the Euro Zone in a combo with an eight year old.

So while it would be all too easy to big this trip up into some sort of major adventure, that’s really not what we have in mind. For a start we’re only planning to travel for four or five hours a day, avoiding highways and with plenty of stops to keep it interesting; because when all’s said and done this is going to be our annual family summer holiday and in my rose tinted memory, above all else they are supposed to be fun – especially when you’re at junior school.

It’s our sincere hope that this trip will load Mackenzie with the sort of memories that will fascinate his grandkids in the 2070s when he’s regaling them with stories of a holiday he’d had when he was their age, which in itself had recalled a world that had largely passed into history half a century before he was born! 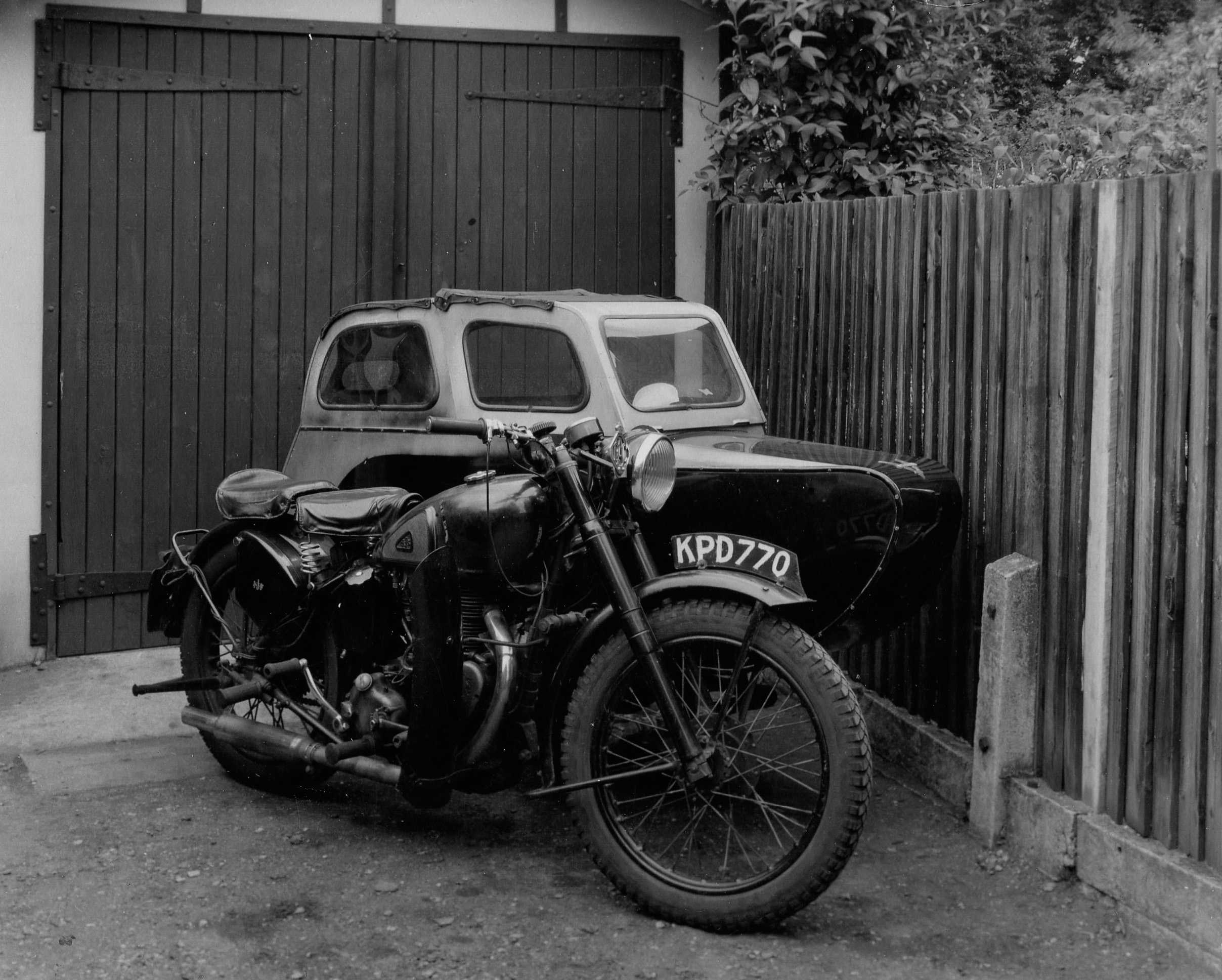 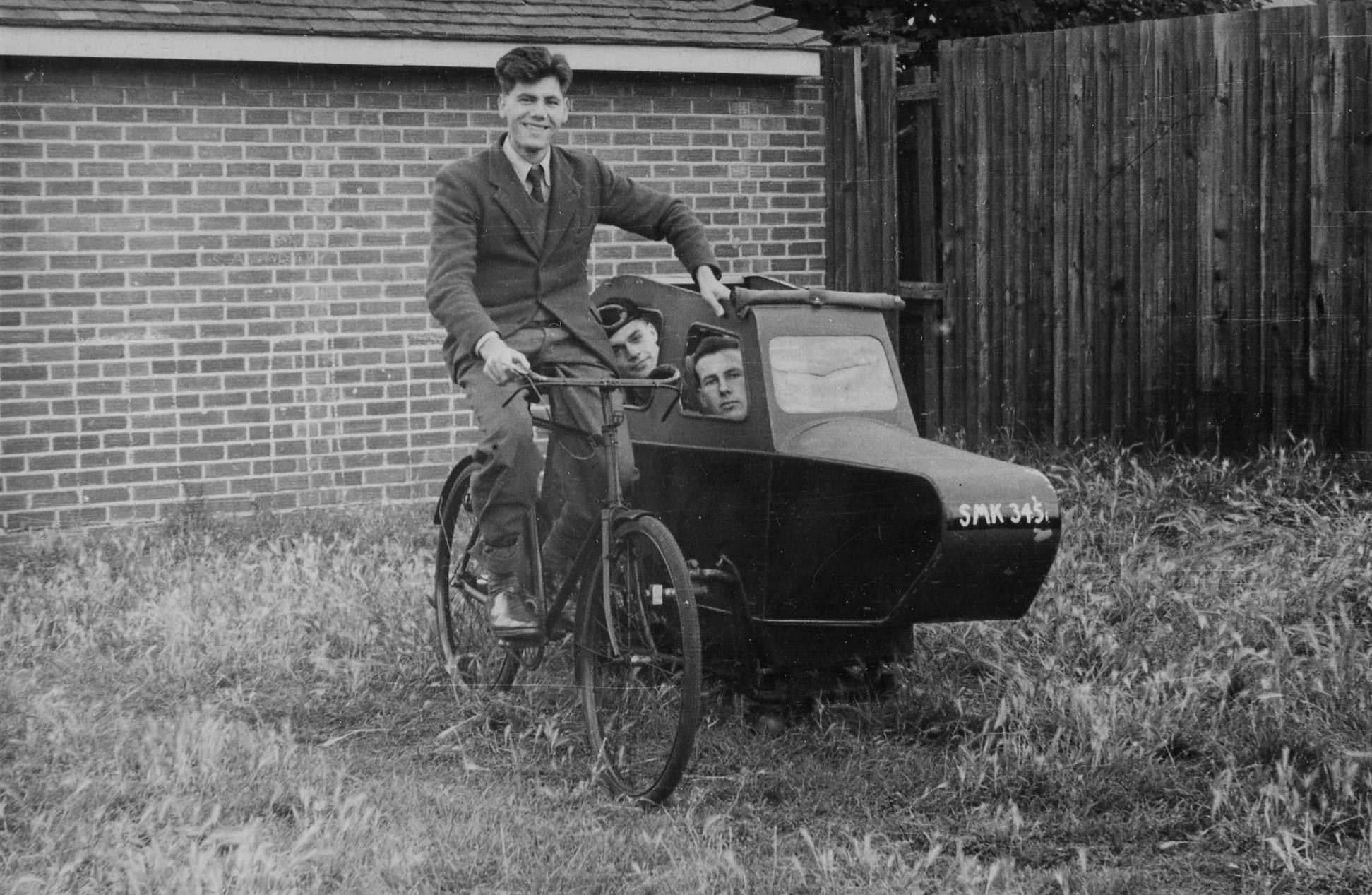 Brian, my truly lovely father-in-law, ran a sidecar when Wendy was just a little girl with a curly carrot-top and I’m very much looking forward to taking her on a trip back to that sepia tinted bygone age; to explore the kind of spirit that Simon Kewer evokes so perfectly with his ‘Family Biker Man’ cartoon – except maybe minus the Gumby knotted hanky and hopefully without any of the ‘running maintenance’ that seemed to be such an integral part of any serious trip in those days. 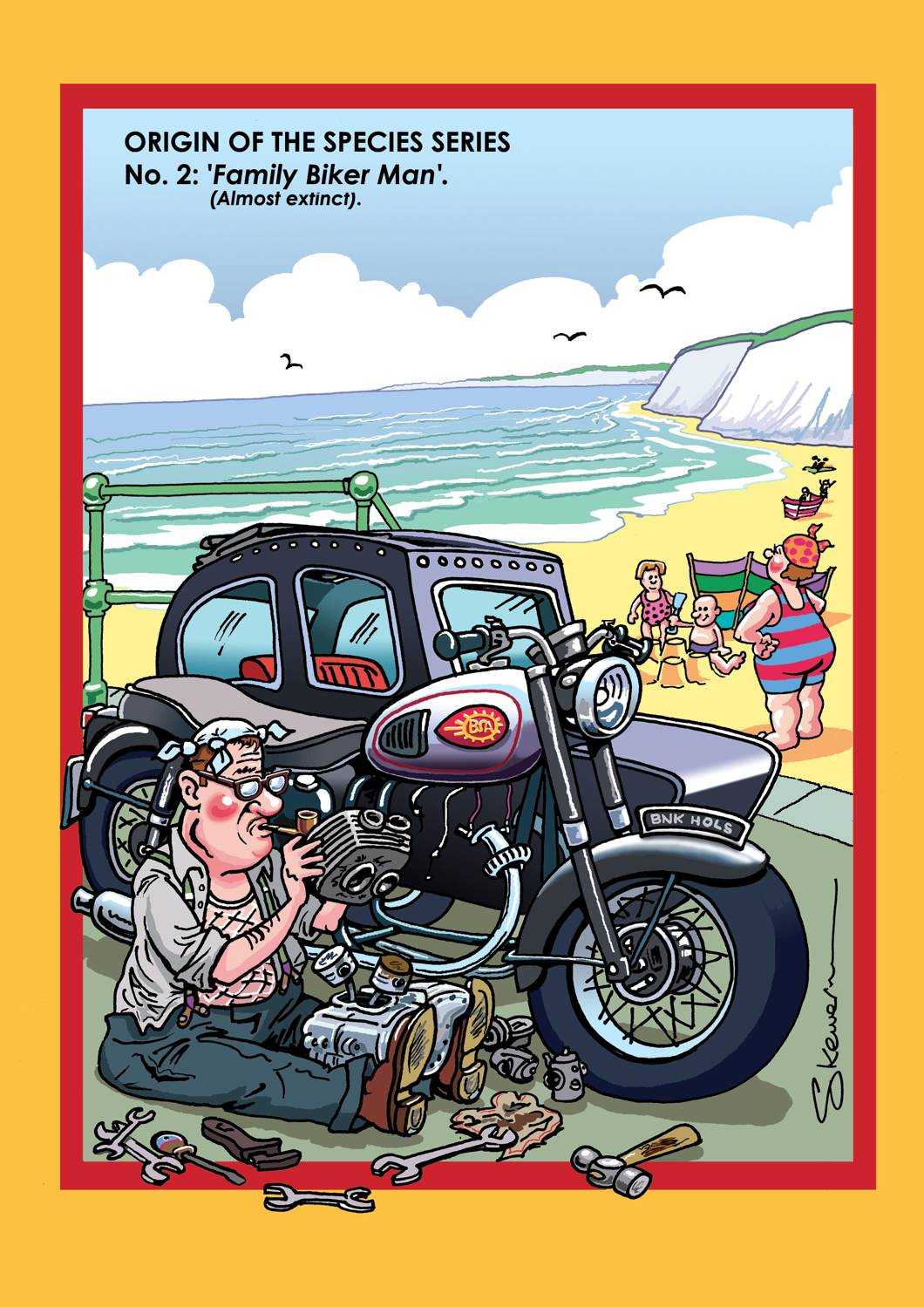 Although we’ve already booked our ferry (via www.Aferry.co.uk – I received a press release just as our plans were beginning to form and I was dead impressed when I clicked on their site and discovered that not only were motorcycle combos included in their dropdown menu but the return Dover/Calais journey was £120 in August!) we have absolutely no intention of over planning things. If we see something, anything, that catches our fancy, we’re going to take time out to stop and check it out and enjoy it.

We’ve allowed a generous week to get to the villa we’ve rented in the mountains of Tuscany (yeah that does sound rather cool!), where we’re going to spend seven days relaxing and recovering from our ‘arduous journey’ by the pool (which is four short steps from the front door) before taking yet another leisurely week riding back home. 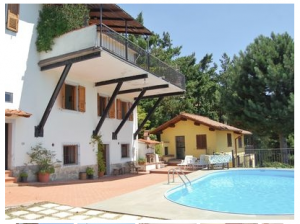 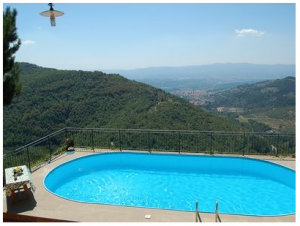 Not that it’s likely to be all plain sailing; first off, I have never ridden (driven?) a combo at any time in my long motorcycling career and I’ve been told that it’s quite a physical experience! Which should be entertaining with my knackered left shoulder, especially with the Alps to negotiate and when the last three or four kilometres up to our villa (which is the distance between it and any sort of shopping facilities) looks like a long strand of spaghetti that’s been carelessly zigzagged down the side of the mountain!

But hey, nothing worth having comes too easy and the truth is I’m looking forward to this trip with the kind of enthusiasm that would be downright embarrassing for a man of my age, if I didn’t have the excuse of a younger wife and an eight year old who I know will hungrily devour an adventure like this.

Anyone who wants to recommend places of interest to visit en route, or suggest cheap accommodation (or better still, offer the three of us beds for a night) you know where to contact me.

Be careful out there

When I first contacted Rod, all that I knew about his latest project was a post he’d put on Facebook a few days earlier saying, “So, three weeks until the Dragon and I’ve just started to think about building the outfit. The bike is finished and tested and reliable, it’s a low mileage 1986 R80 with a 1000cc Siebenrock Power upgrade. I’m still in two minds as to whether or not to build my own sidecar frame but there is this Ural just sitting there… I’m fairly confident it will have a Ural body as they are just superb and work well for what I like to carry. I’m not going to make it look too pretty, so people won’t try to buy it from me, as I want to keep this one.” 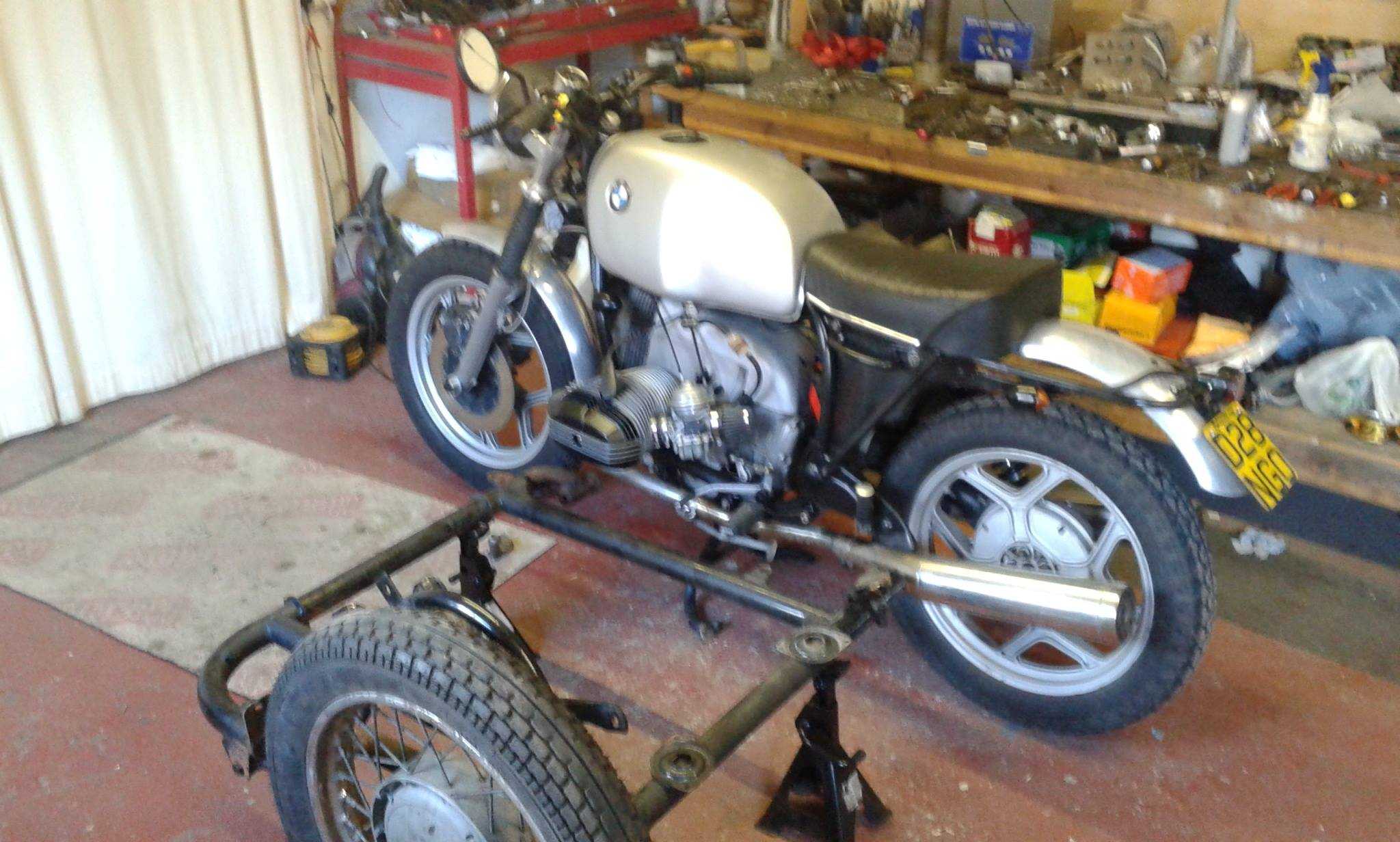 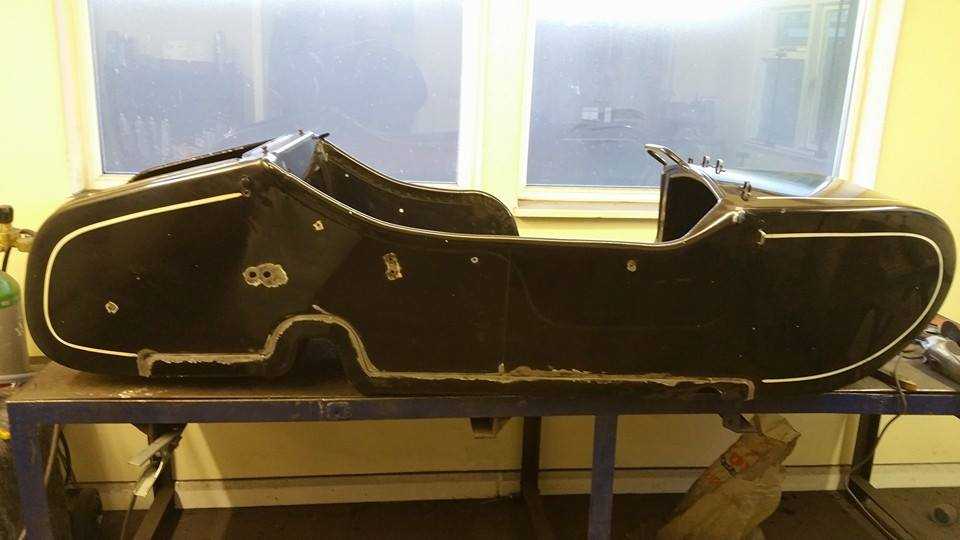 Looking at the snaps he posted alongside those words, you can see that was still a distinct possibility at that time. But the pictures of the finished combo below show exactly why Rod finds it so difficult to hold onto any of his creations, because as soon as he starts riding them, someone invariably makes him an offer he can’t refuse! However, as I pointed out when I first saw the pictures of this beautiful mixed marriage, at least he’ll be able to fob off anyone trying to thrust money at him for this one by telling them that he couldn’t possibly accept the silly sum they’re offering as he’s promised to loan it to the Managing Editor of The Rider’s Digest in August. 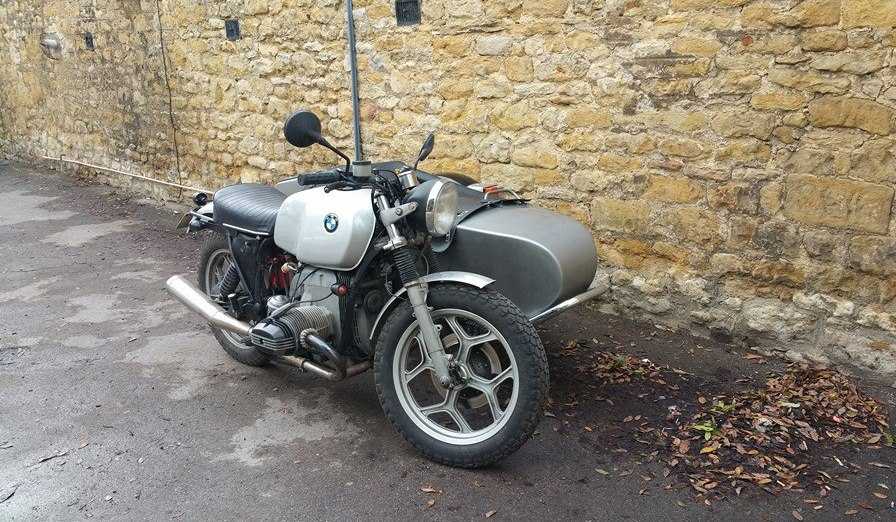 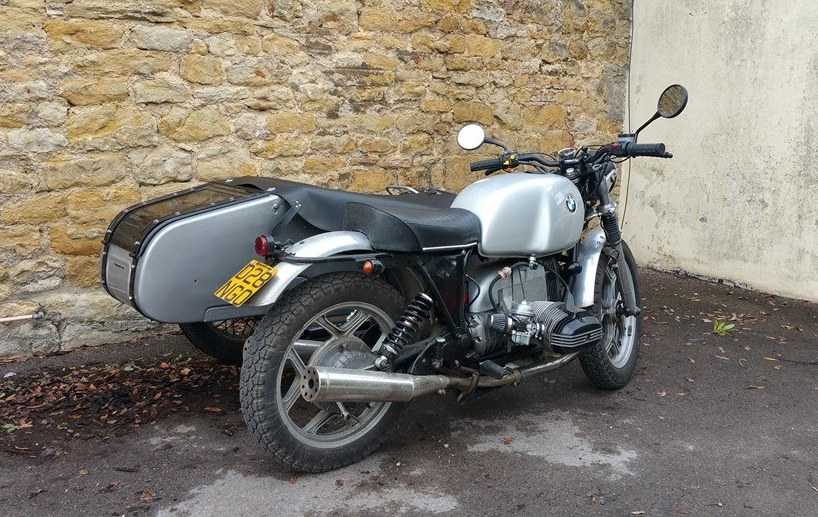 Look out for an update in the next edition of The Rider’s Digest and a full report on our escapade in the first issue after August. 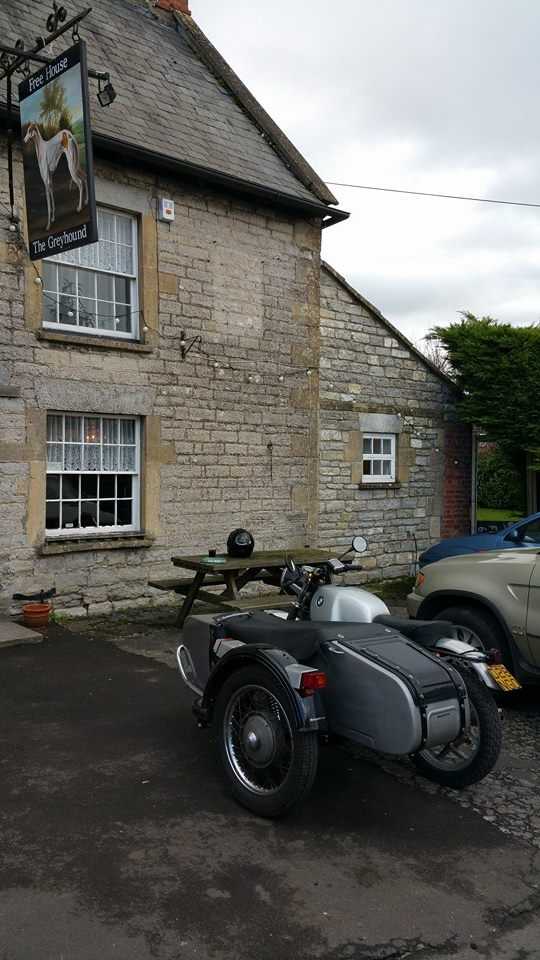 One thought on “The Grand European Tour Revisited”