A recent magazine article entitled “sheds” got me thinking about the various odd places where I’ve built my cars and bikes over the years, and whether much has changed in that time.

The first shed I could remember was my granddad’s, full of gardening gear, fishing rods, ancient woodworking tools, and… some ex WW1 live bullets which I found at the bottom of a box. When someone eventually came to see what I was up to, I was hitting them with a hammer to see if I could get them to fire! See, even then I knew hitting things with a hammer made life interesting! 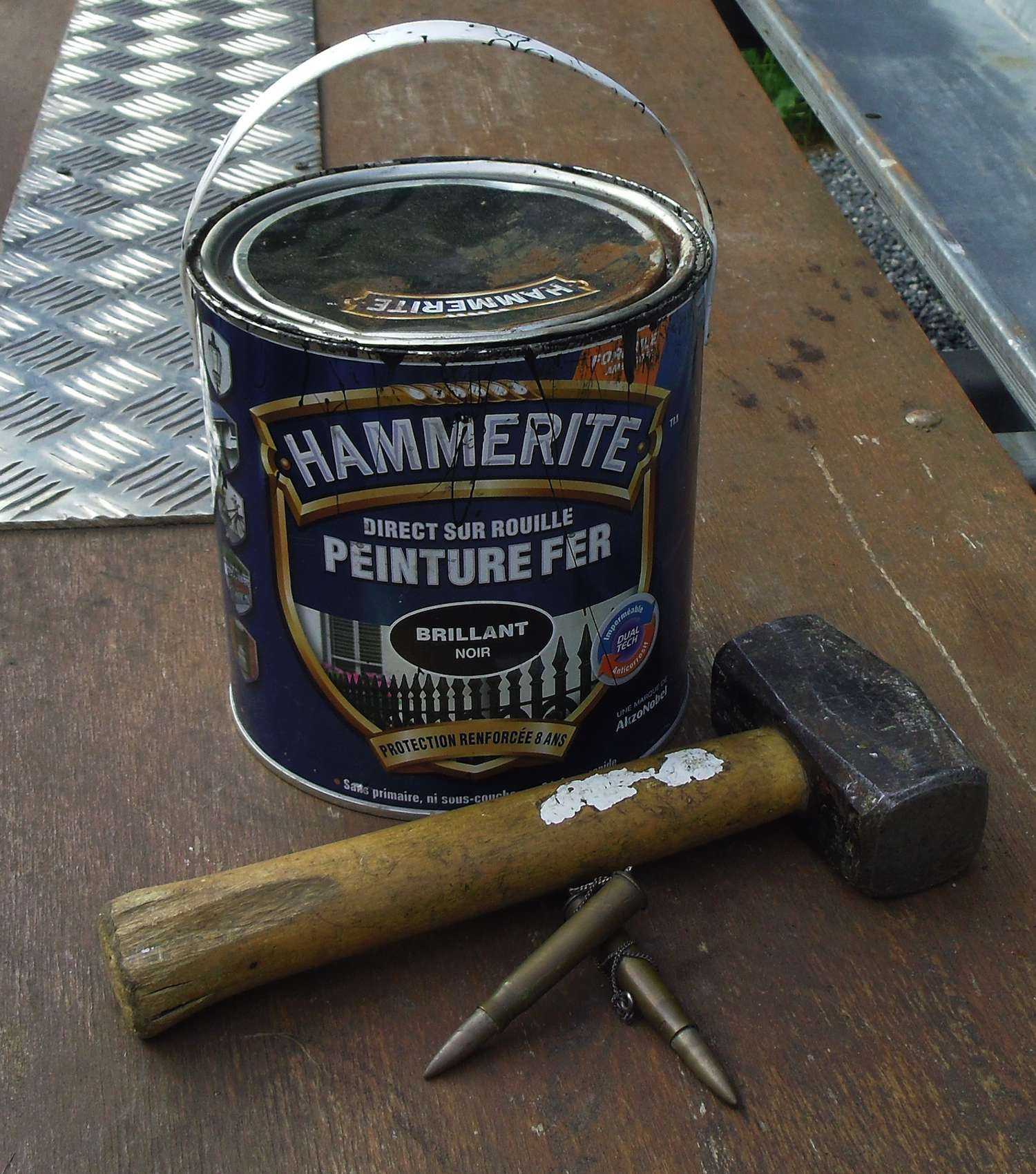 Like many, I started modifying my vehicles in the street, changing engines and even doing full paint jobs, with the attendant puddles of oil and multicoloured tarmac provoking surprisingly irate reactions from parents and neighbours. I thought it looked quite artistic myself, but some people have no taste.

Resorting to coercion and blackmail eventually helped me jump the long waiting list for a council lock up – and despite the lack of power and light, and the distance from my home, I felt like a professional. That didn’t last long, and various house moves resulted in many years of working in gardens, wooden sheds and the tiniest of garages. Given that the majority of my cars came from the other side of the Pond, I often had no more than a few inches around the vehicles to carry out some serious modifications. Even the kitchen was occasionally taken over by frames, wheels, etc, but for some reason my wife objected to this intrusion into her domain. 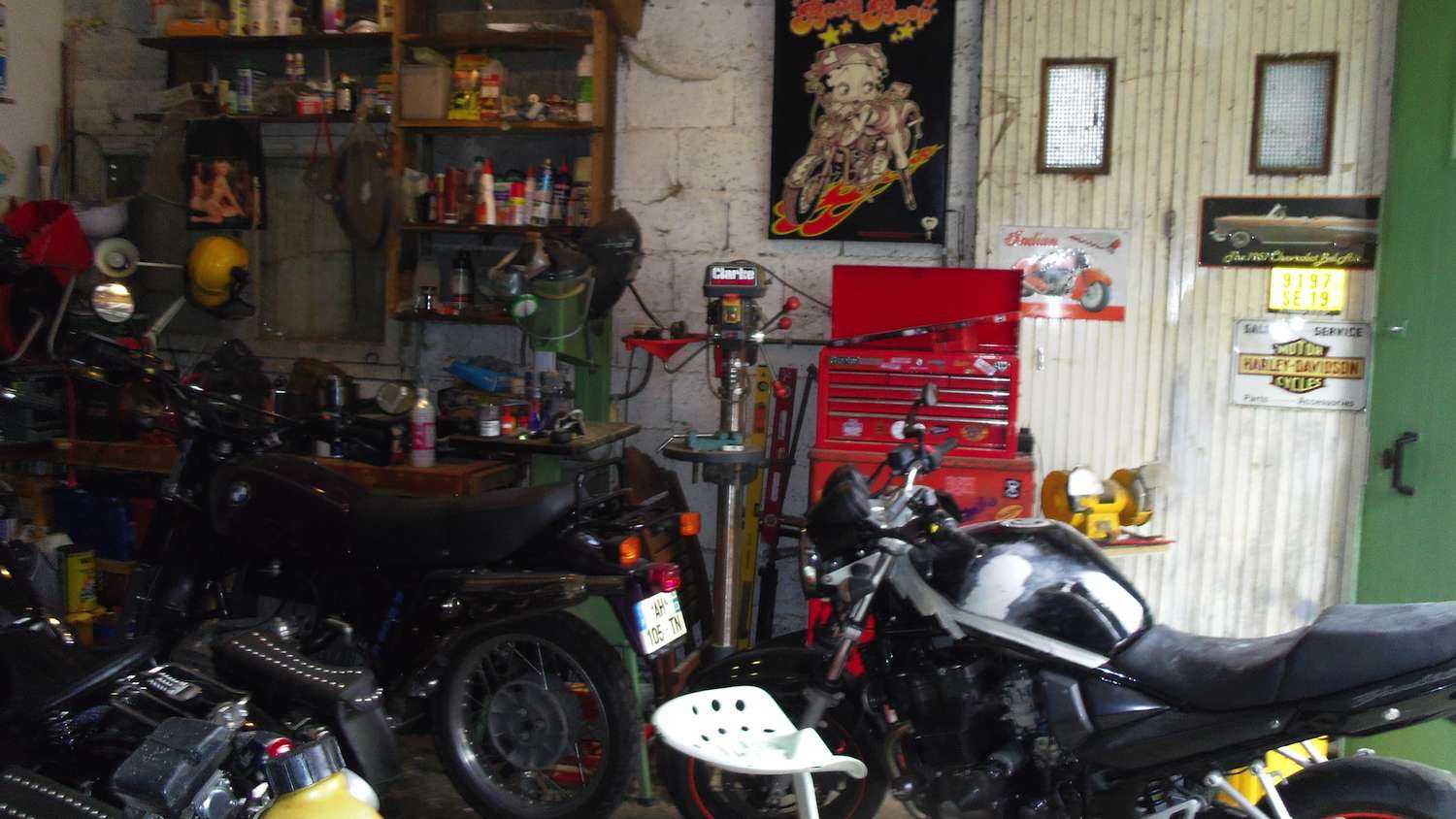 A quick word of warning here: cleaning alloy wheels in an enamel bath using a certain proprietary wheel cleaner makes a great job of the wheels – unfortunately it does an equally good job of stripping the enamel coating off the bath! Christ knows what it would do to a plastic one, but radiator paint saved my skin on that occasion and lasted for years. Working on the bits in the house while the wife was out at work, and moving everything outside before she got home never worked either – she had a sense of smell like a bloodhound, and knew as soon as I’d opened a Hammerite tin. Personally, I thought that Hammerite had a pleasant, subtle aroma, which complemented her cooking, but she never agreed. Possibly that’s why she’s my ex–wife.

Of course I wasn’t alone in having problems finding space for my projects. Cars and bikes were being built in the most unlikely of places. We’ve all heard stories of chops built in bedrooms and flats, and then having to be stripped to get them out, or in tiny sheds where the door was too small to exit the shiny new creation. But the custom builder is a hardy soul, and will put up with any inconvenience to pursue his hobby.

Then, stories started filtering through the grapevine of our much more organised Scandinavian cousins, who rented large heated workshops, and shared the facilities and their tools as a club. It sounded like good sense, and me and my mates, as a club, thought it would encourage us to get some work done during the dismal freezing Scottish winters. A bit of mutual encouragement can make all the difference between getting some work done, and sitting with your feet up in front of the fire, or sitting in the pub talking about what you could have been doing. 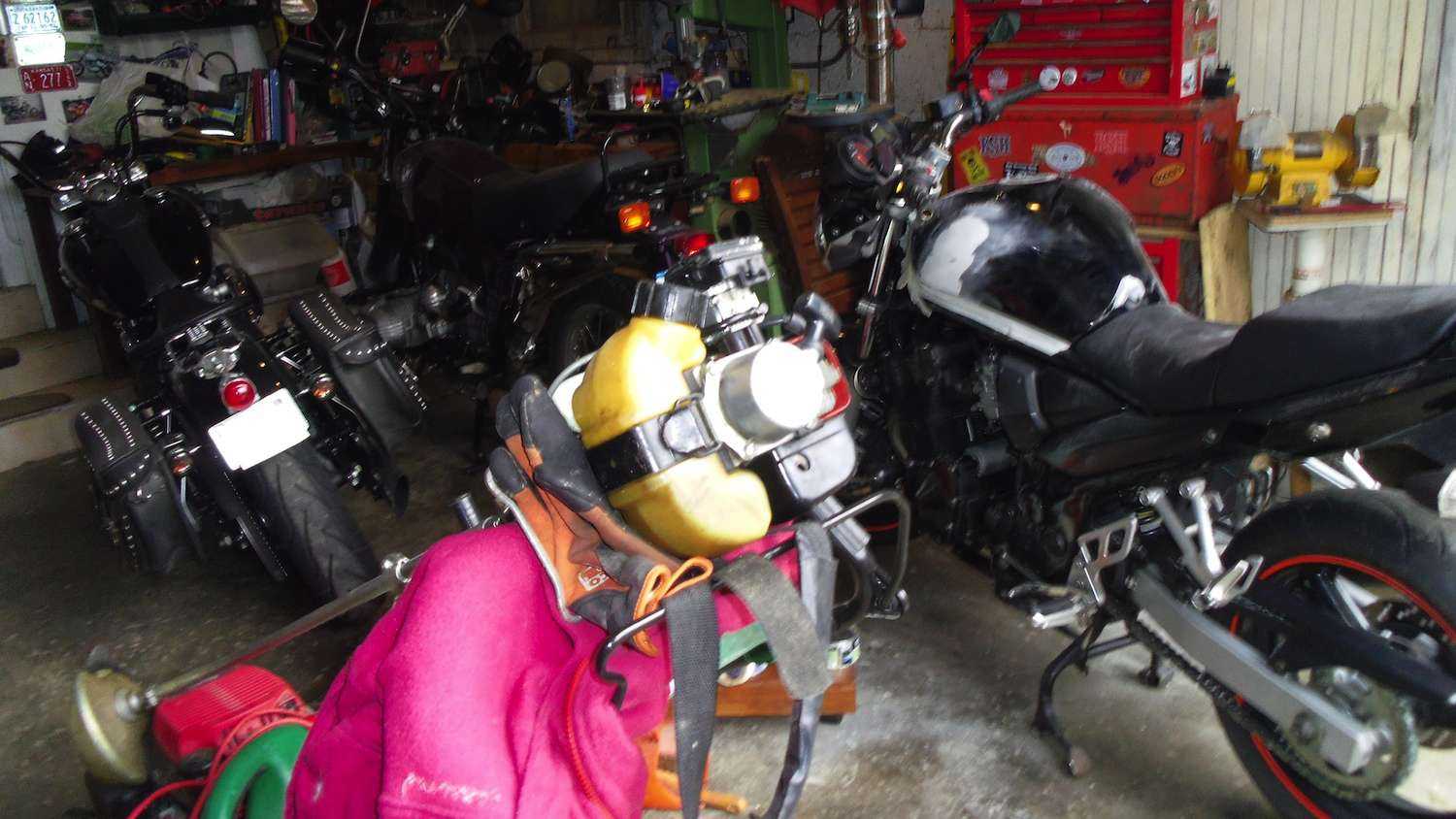 Suitable(ish) premises were eventually found, and soon filled with the usual variety of tools, parts and unfinished projects that such premises always attract. Weekends usually saw a crowd of club members, hangers-on and curious spectators, with burnouts in the courtyard, parties and barbeques adding to the fun. Oh yes, and sometimes even explosive stuff hidden in barbeques to surprise our visitors. Occasionally we even got some work done to our projects!

In principle it should have worked well – there was always somebody around to help pull out an engine, assist in solving a tricky problem, or kick your ass if you were getting lazy. But, it wasn’t long before the problems set in: no-one would ever admit to using up all the welding rods or the gas bottles, favourite tools vanished into thin air, never to be seen again, and each time the rent was due there was always at least one individual who was broke and couldn’t chip in their share (usually the same ones each month). So we quit, wondering just how the Scandinavians could make it work so well.

For me and the guys, it was back to tiny sheds and garages, where in my case the bikes had to share space with my woodturning equipment. With all that dust and shavings about it wasn’t the best environment for bike building, and especially painting. Simple jobs like painting a tank had to be redone once or twice to get them right, and more than once I had to throw myself between a flying bowl and my bike to save a dented tank. Didn’t do my head much good though! I promised myself my next house would have a big garage. 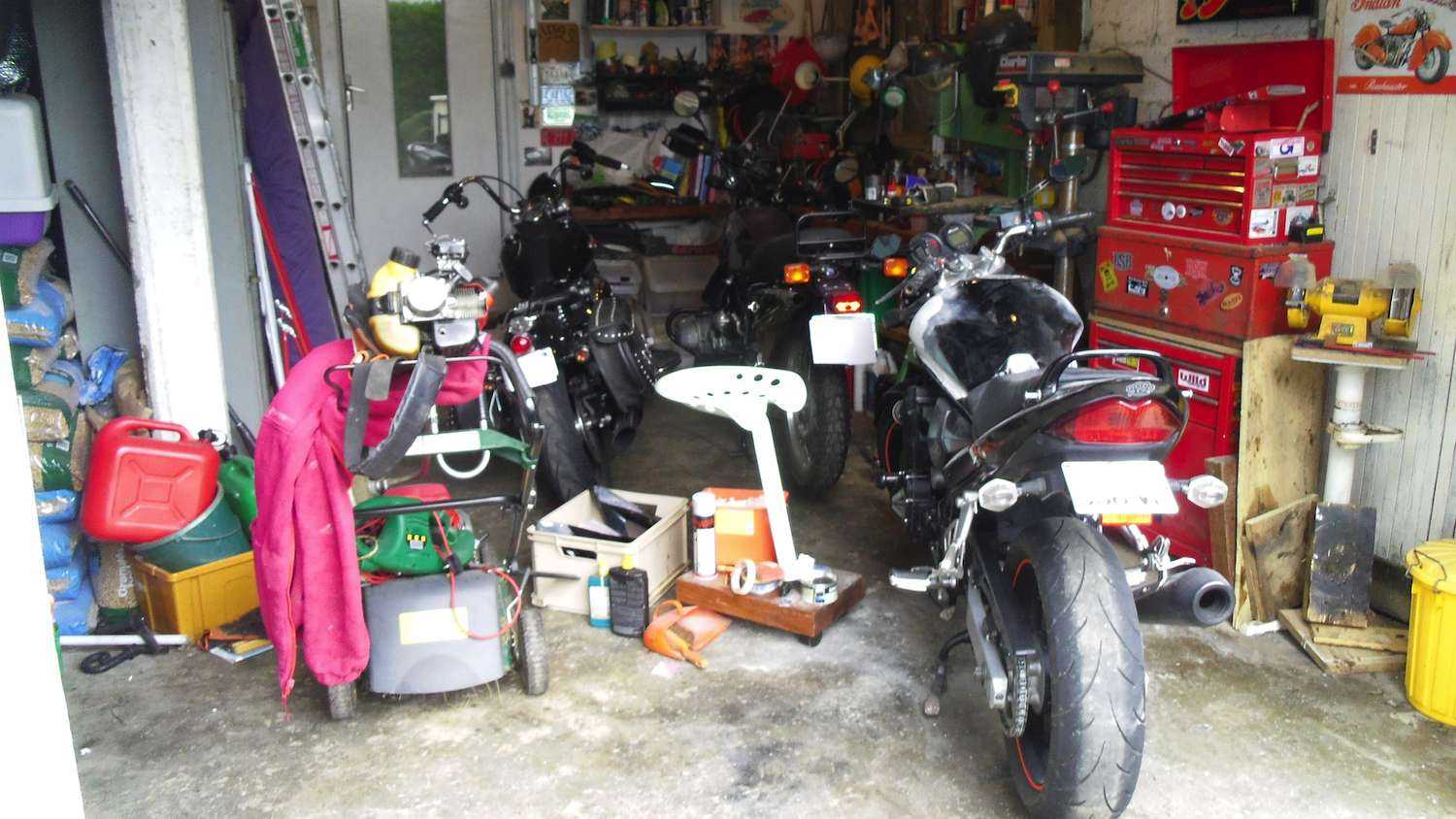 So, to France – land of cheap houses with copious barns that were even cheaper – and I go and buy a house with an only slightly bigger than average size garage. Will I never learn? It was quickly filled with woodturning equipment, but as I was renovating the house a cement mixer joined the melee, followed by a ride on mower and all the other equipment deemed necessary to cope with the extensive grounds that come with houses here. So, for the past few years I’ve had to squeeze my Harley into any available space, and project bikes have had to be moved on a daily basis just to get into my house.

I had thought that the only solution would be to scrape together the funds to build a new garage, but the recent sale of my wood turning equipment gave me the motivation I needed to totally revise the workshop, build new workbenches, and sell off boxes of old tools I haven’t needed or used for at least twenty years (and yes, I know I will probably desperately need them next week!). I now have, for the first time in my life, lots of space to store and work on my bikes, and for the next project bike when it arrives.

But there is of course a downside to this – friends come round and see all the available space and ask to store their stuff in my tidy new workshop, so the new garage may yet be required!