When I informed the editor that due to a series of unforeseen events, I would be substituting a Saab convertible for the BMW/Ural combo that I described in “The Grand European Tour revisited”, he responded with, “I’m fascinated to see how you’re going to work a car article into a bike mag.” 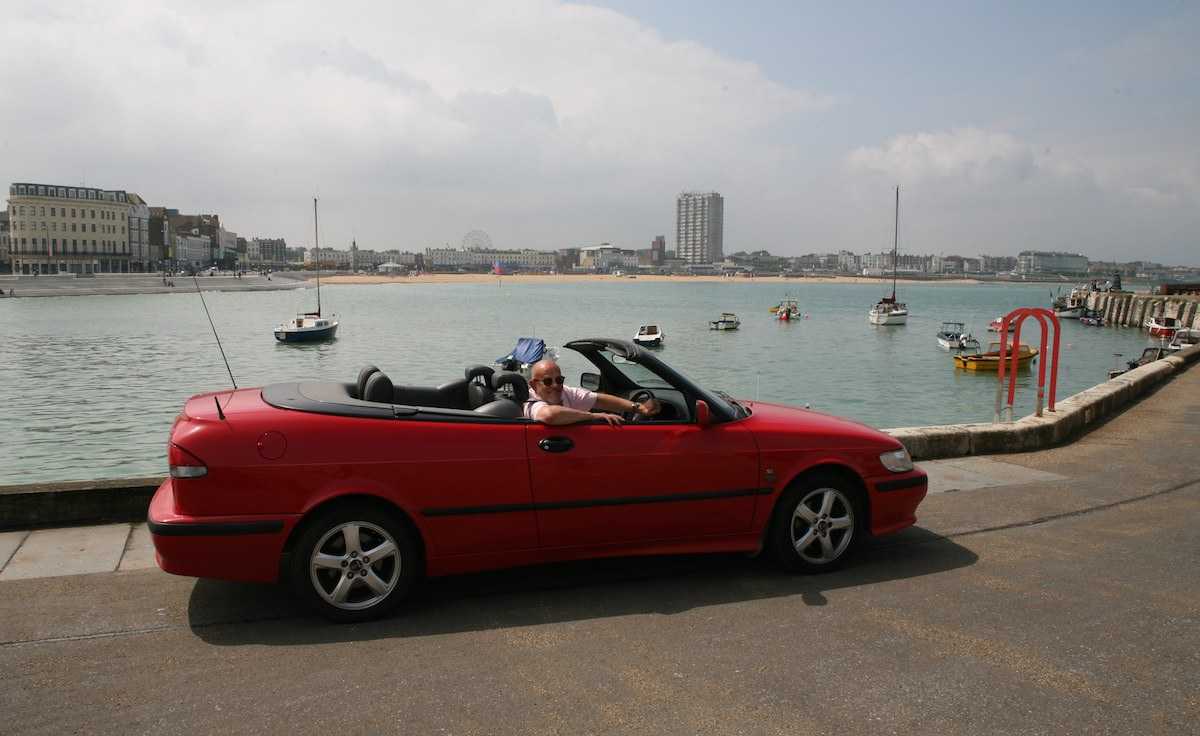 Which made me chuckle; I’d already considered appalled letters to the editor demanding to know what A CAR!!! (exclaimed in the manner of Lady Bracknell saying “A Handbag!”) was doing in a MOTORCYCLE magazine!? But I really thought the editor would have understood, particularly as he came to motorbikes comparatively relatively late in life.

The thing is I’d be willing to bet that most of the people reading this don’t do the majority of their annual mileage on a bike. I’m aware that there are many notable exceptions, including hundreds of thousands of commuters, who cover the same ground up to 500 times every year; but a lot of them do so out of sheer practicality, they have no great love of riding and wouldn’t dream of taking their bike out for a jolly at the weekend.

On the other hand there are people out there who are older than me, who don’t even possess a car licence and have ridden a bike to just about every place they’ve been since the fifties and all I can say is fair play to them, if they don’t epitomise the term ‘biker’ I don’t know who does. However, when it comes to the rest of you, let he – or she – who has never driven a car, cast the first “Cager!” 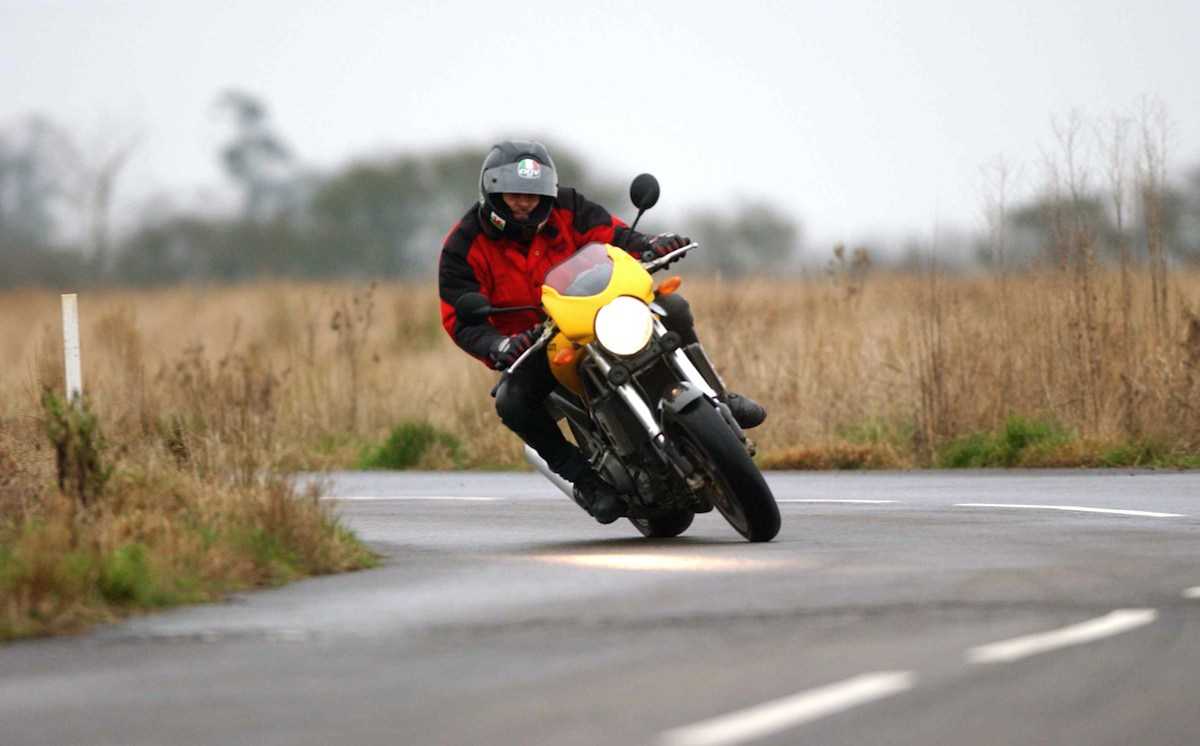 By the time you read this I’ll have been riding bikes for exactly forty years (that’s right ed, literally since you were in nappies!). Twelve years ago my wonderful world of motorcycling had reached a zenith. Although I still had a day job, ever since the end of the previous year I’d been borrowing a different press bike every month and writing about it in The Rider’s Digest. My test-riding career had started with a bang in December ’02 on a Ducati Monster S4 but it ended with a whimper the following June, when the Aprilia Caponord that I’d had such a craic riding in Ireland just a few days earlier, was pushed onto me, dislocating my right knee and cracking my tibia into tiny pieces.

I was back on two wheels again soon after I had my full testicles to toes plaster removed because it was far and away the most practical means of getting around (it used to tickle my consultant that I travelled all the way across London – from Streatham to Archway – with my crutches strapped to the side of a scooter) and once I’d finally finished with all the corrective surgery – which was over four years later – I began sourcing press bikes again. 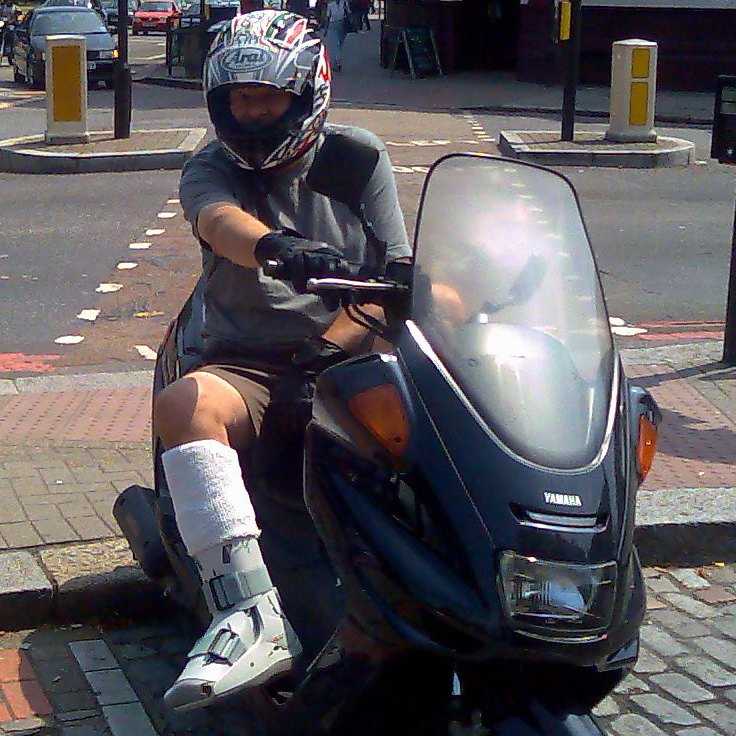 A lack of bend in my replaced right knee has meant that any bike with anything resembling rear-set foot pegs, is out of the question; but on the upside I soon discovered just how comfortable tourers and cruisers can be and I rode all sorts including a full-dress Electraglide and Triumph’s mega Rocket III.

I also tested the various contenders in the super scoot sector and in spite of scooter riders generally being dismissed with the same sort of contempt as ‘cagers’, I decided that a large capacity automatic step-through was the most practical machine to meet my motoring needs and still provide me with some two-wheeled fun.

With the fun factor very much to the fore, in spring 2009 I persuaded the lovely people at Piaggio to give me one of their wonderful GP800s on a long-term loan. Unfortunately exactly a week after picking up the Aprilia engined grin generator, a young chap in a Golf decided he could steal a jump on the traffic lights and left me eating tarmac with a posteriorly dislocated shoulder and a few thousand quid’s worth of damage to a machine that I’d been looking forward to riding for next twelve months. 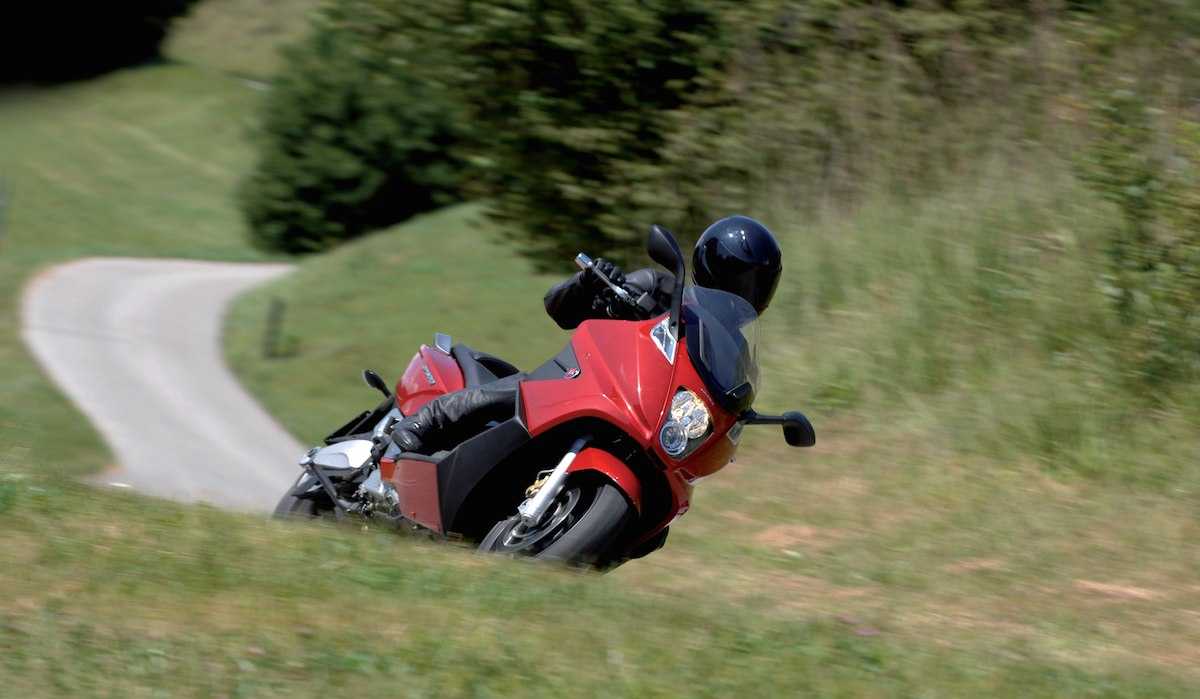 The shoulder dislocation was slightly less painful than the knee when it happened (a mere 9.8 as opposed to a full 10!) but it still gives me gyp six years later and needs replacing so – and this is where we get back to the original story – after quite a few of my friends – including a very old one with considerable experience of combos both off and on road – warned me that ‘driving’ a bike with a sidecar is a decidedly physical experience that demands that the pilot both push and pull on the bars, I began to get just a little worried about whether or not I’d be able to manage it.

Between times Rod Young, the owner of the BMW/Ural I’d planned to use for the trip had been forced to move to new premises and was obliged to sell the combo to help with the expense so I decided that the best way to ensure that I had a machine in place for the summer would be to buy the component parts and get Rod to put them together. Then I would be able to advertise the combination by blogging en route to Italy and back and hopefully be able to sell it on my return for enough to recoup my outlay and provide Mr Young with a good return on his labour. I’ve always thought the Triumph triple is the best engine I’ve ever experienced and Rod agreed that it would work perfectly with a sidecar so I started looking for a nice Thunderbird.

However, by this time it was getting on towards the end of May and I still hadn’t even so much as driven a combination around the block so I had no idea how difficult it would prove to be with my dodgy shoulder. Basically I’d accepted that it would almost certainly be at least a little bit painful; but Wendy had booked three weeks off, we’d rented a remote villa in Italy that we would be unable to access without transport, and we’d paid for a flight for my 19 year old to join us out there, so in the absence of any other option, I would just have to ‘man up’ and get on with it. 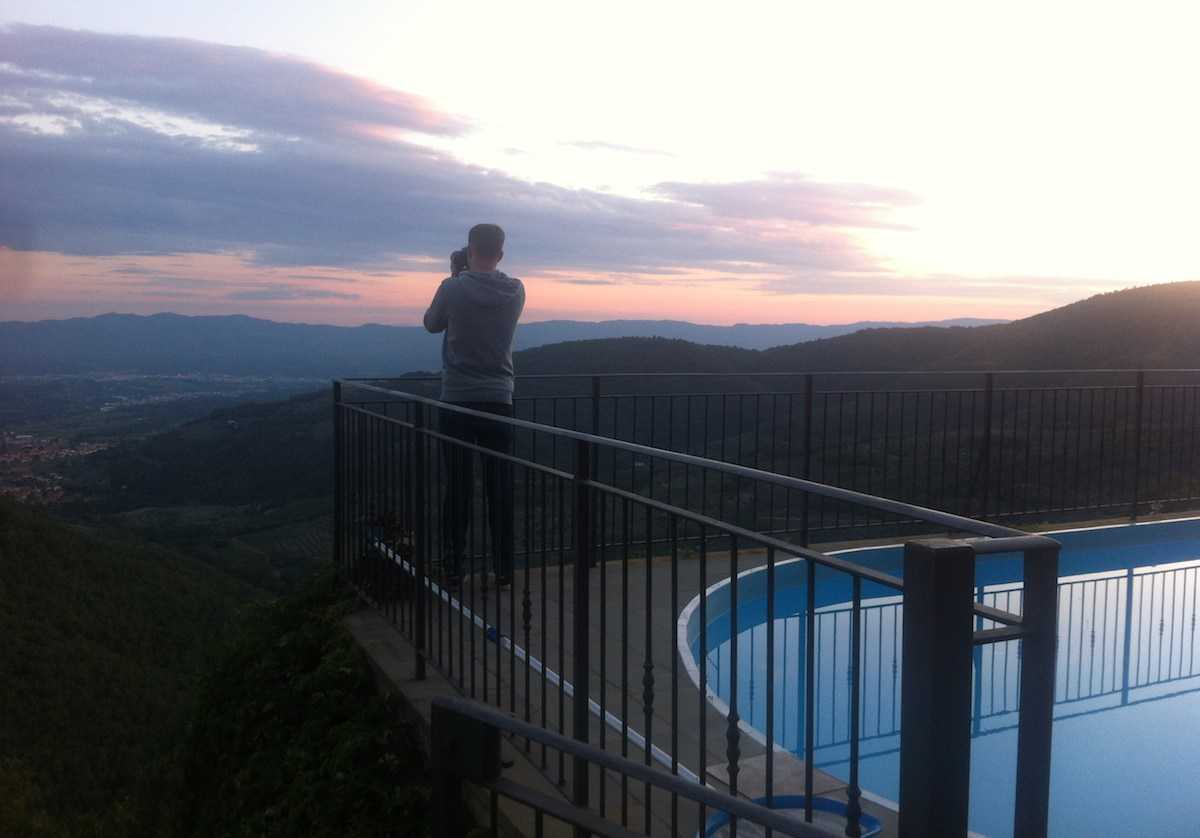 Wendy questioned the logic of potentially crippling myself daily simply to deliver on what had only been a toss away idea in the first place? It was supposed to be an eight year old’s dream holiday, rather than a sexagenarian trying to prove that – even with a body that’s been badly battered and broken by bikes – he can still deliver the goods for a wife who’s more than a dozen years his junior. I had to concede that she made sense and as soon as I did Mackenzie (our boy) admitted that he had been having nightmares about the sidecar coming loose – the way it does in “The Lady and the Tramp”! – while we were riding around the Alps and that sealed it.

But what about the Digest’s readership? I’d written an introductory article in the last issue and they are expecting an update in 189 and a full report in 190. “Sod the readers” said the missus “it’s our holiday not theirs and I’m way overdue for a decent break” – and once again I had to bow to her superior wisdom and sense of perspective.

I did consider saying nothing and hoping not too many people would notice and even fewer would bother to write in about it; but then, as I said at the top, I figured that as long as I was upfront, I could probably get away with mentioning a (ssh, whisper it) car within these pages, without the cries of outrage being too deafening.

Our big problem was that having decided that the sidecar plan was a non-runner, we now had a three-week holiday that required a vehicle. My Burgman’s a big and very capable old scoot but we weren’t planning to visit south east Asia and I figured the police in the EU states we’d be passing through might take a dim view of riding three up! The trouble is I haven’t owned a car for over a dozen years (yeah, like I said, I’m a real biker me!) and the cost of hiring one for twenty-one days would be prohibitive.

We decided it would be a lot more sensible to buy a cheap left-hand drive car for the holiday and then sell it again when we got back. However, when I began to explore our options, I discovered that although I have over two decades of claim free bike riding and I’ve driven any number of hire cars over the last twelve years, my long period of non car ownership had left me with zero no claims bonus, which meant that the insurance was more than the cars we were looking at.

Consequently we raised our sights somewhat and bought an immaculate Saab convertible, which prompted comments about me going through a mid-life crisis. Besides being rather ironic given that at least half of the jibes came from born again bikers, it also suggested the worrying prospect that I might live to be a hundred and twenty! More importantly though, they ignored the reality that it was my wife – who has never so much as held a provisional licence – who fell in love with the car and paid for it so that I could chauffeur her around in style.

Rod Young has renamed his sidecar outfit (see what I did there?) “Three Wheels Better”, a term he used in the title of an article in issue 140 (way back in June ’09) and many of the words on the “Sidecar fun” page of his web site – where he lauds the many benefits of driving a combo – were in that same feature.

Now far be it from me to suggest that motorcycles – and sidecars by extension – are anything less than the greatest things ever to be attached to wheels, but reading through Rod’s list of advantages, I couldn’t help noticing that most of them are equally applicable to a car with a soft top and it occurred to me that if you’re the sort of person who is heavily inclined towards enjoying yourself, you are likely to do so irrespective of the number of wheels on your wagon.

I’m sorry that this article isn’t what you’d expected and that I won’t be able to deliver the epic tale I’d hoped for part three. If you are a friend – whether in the real world or online – I’m sure you’ll see plenty of photos and read the odd word about our adventures and you can be sure I’ll share any links on The Rider’s Digest’s Facebook page (in my own name rather than as the page to avoid cluttering its timeline with car crap!) so that anyone who’s still interested can see just how much fun we’re managing to having in spite of having more than the optimum number of wheels.

Because of the sort of space a combination takes up, our ferry booking had us down as a car anyway so it was a simple case of using the “Manage my booking” feature on the AFerry web site (www.aferry.co.uk) to insert the new registration number and vehicle details – and by doing so online you only incur a £10 admin charge.