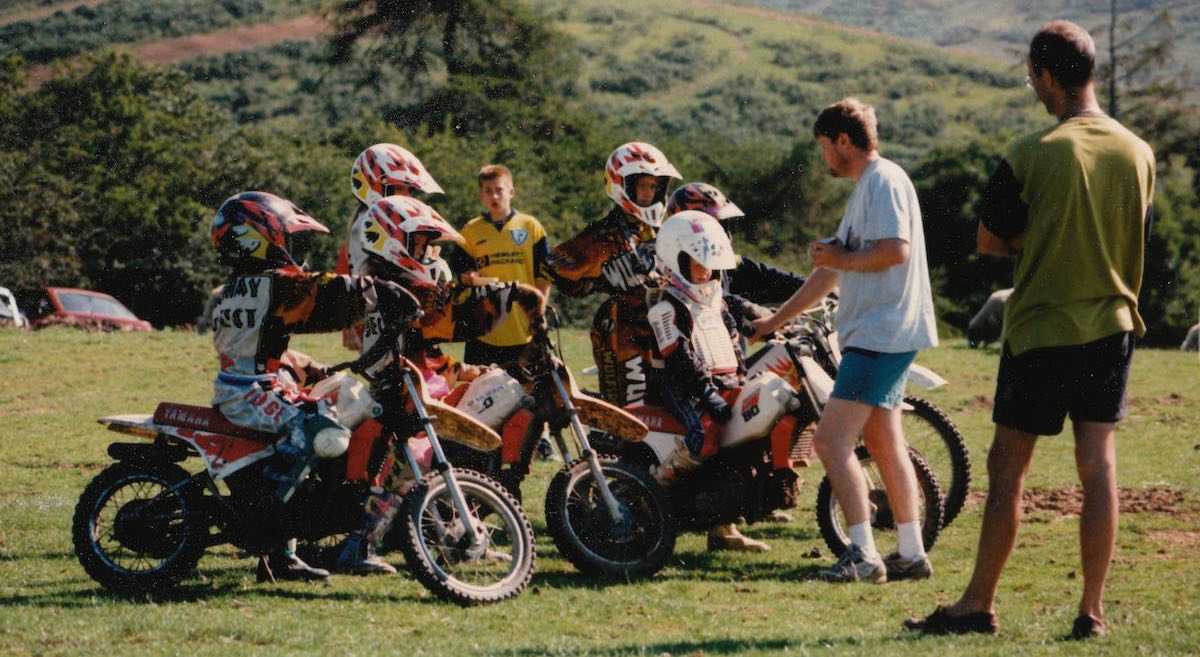 Towards the end of April a mum from Texas found herself at the centre of a veritable Twitter-storm after this photograph appeared online showing her boyfriend carrying her seven year old daughter on the back of his BMW S1000RR. 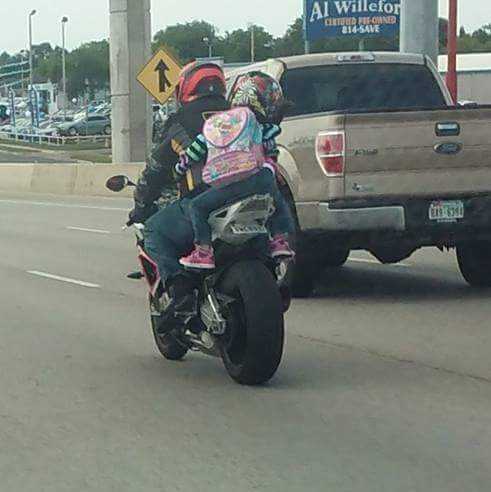 Although it is perfectly legal in Texas to carry a child over the age of five providing they are wearing a helmet, and in spite of the fact that she had armour under her hoodie, gloves on her hands and trainers that covered her ankles, the girl’s mum received an absolute torrent of abuse from people accusing her of being a bad mother.

The mum – Mallory Torres – defended herself in a Facebook post and on local TV and the story featured across the world including British tabloids. Unsurprisingly perhaps, the subject has caused massive debate, which seems to be dividing along the usual lines. On one side are all the people who believe that motorbikes are so incredibly dangerous that nobody should be allowed to ride them, let alone precious, defenceless children; while on the other are the libertarians who think that matters like this should be entirely a question of personal choice and that – with the guidance of their parents – that option should be available to children too.

As you would imagine the majority of the ‘much too dangerous for kids’ side are non bikers themselves but it’s interesting to note that there are many motorcyclists who agree with them; which in common with the proponents of ATGATT (All The Gear All The Time – a closely related thorny subject that is equally divisive and one that I fully intend to explore further at a later date) leaves me wondering why they ride a bike themselves if they really consider them to be so dangerous that they can only be ‘enjoyed’ by consenting adults securely wrapped from head to toe in hi-tech protective kit? 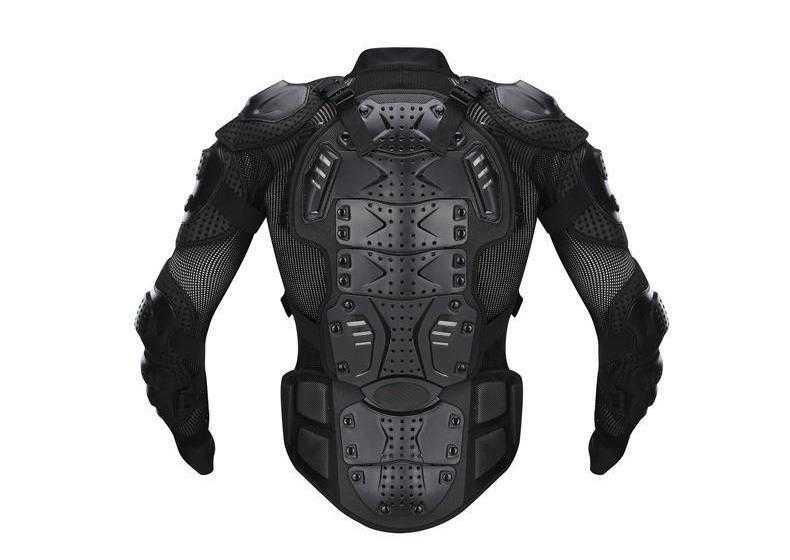 The pictures below suggest that there must be many significant sociological, cultural and no doubt financial factors that need to be taken into consideration when it comes to the question of whether or not it’s morally justifiable to carry children on motorised two-wheelers. How else do you account for the fact that the good citizens of the cyber world are so appalled by the actions of the parents of this particular Texan kid, when they are more than happy to ‘Like’ and share photos showing entire families – without helmets and dressed entirely unsuitably – being exposed to Third World traffic conditions? Surely it can’t be anything as simple and fundamental as racism – the unexpressed assumption that an American child is somehow inherently worth considerably more than any child in a less developed country? 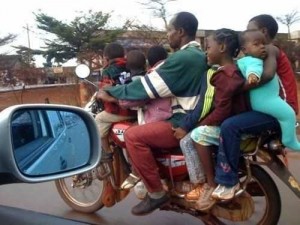 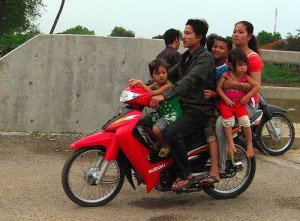 The title of this piece is a nod to the fact that it’s ground that I already covered many years ago and at some length within the pages of The Rider’s Digest. The first time I attempted to explore the question was in issue 40, way back in November 2000 in an article entitled “Precious Children”; but as I recall it didn’t generate much by way of correspondence at the time (which is hardly surprising when you consider that at the turn of the century our audience was almost entirely made up of London motorcycle couriers, a very particular group of individuals, professional riders who were a lot more likely to get involved in a dialogue about the closure of a public toilet, the biggest twat who’d nearly killed them that day/week, or – and this was a perennial page filler – the latest shitty rate cut, than any debate about what would or wouldn’t make riding on two wheels quantifiably safer – discussions that for many of them seemed like the equivalent of wrangles about angels dancing on pinheads, given the context of the sort of thing they were doing in the Capital’s traffic for upwards of fifty hours a week).

However, about eight years later the article reappeared as the fifth chapter of The Carin’ Sharin’ Chronicles and since then I’ve found that aside from the people who just want to talk about the funny bits (in particular it seems the part about me lying in the road, battered, bruised and thoroughly gravel-rashed – but still smiling up at a pretty redhead), most of the conversations I’ve had with readers who are parents, have been about my position vis-à-vis the carrying of kids and as I’ve stated above they tend to be either vociferously for or against, with very little willingness or ability to consider the alternative point of view. 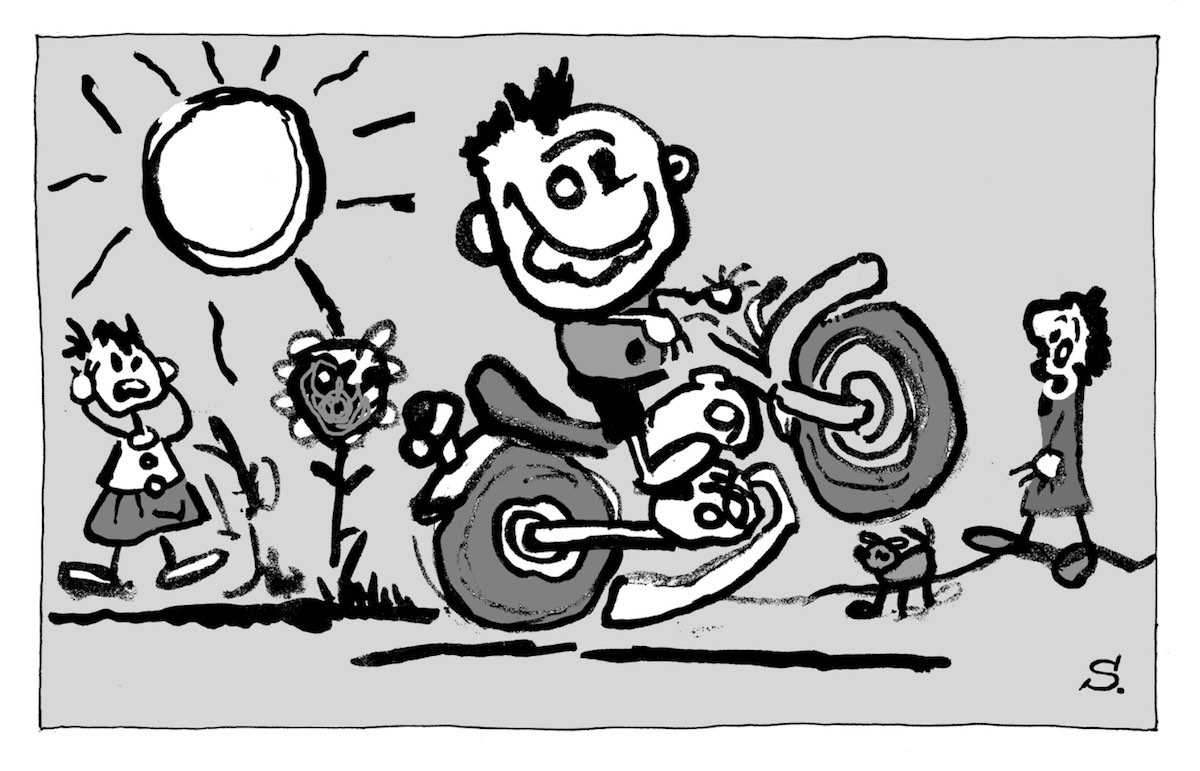 And what is my point of view? You’ll need to treat yourself to a copy of my book (which according to the reviews on Amazon would appear to be well worth the six quid + p&p it’ll cost you) if you’d like to read the chapter and verse but suffice to say that as these few paragraphs below indicate, I’m right with Mallory when she concludes her FB post saying  “THERE IS NO POINT IN BEING ALIVE IF YOU AREN’T LIVING!!!❤ #isupportmychildonabike”

“I thought I’d better go back over the ground with a couple of other biking parents. With nine kids between us, Paul (3), Dave (2) and me (4 [it’s 5 now]) would seem to constitute a pretty reasonable cross section. We all have at least one child of each sex and each of them (with the exception of my youngest [who was four at that time – he’s twenty now!]) has, aside from riding pillion, ridden trials/motocross bikes themselves.” 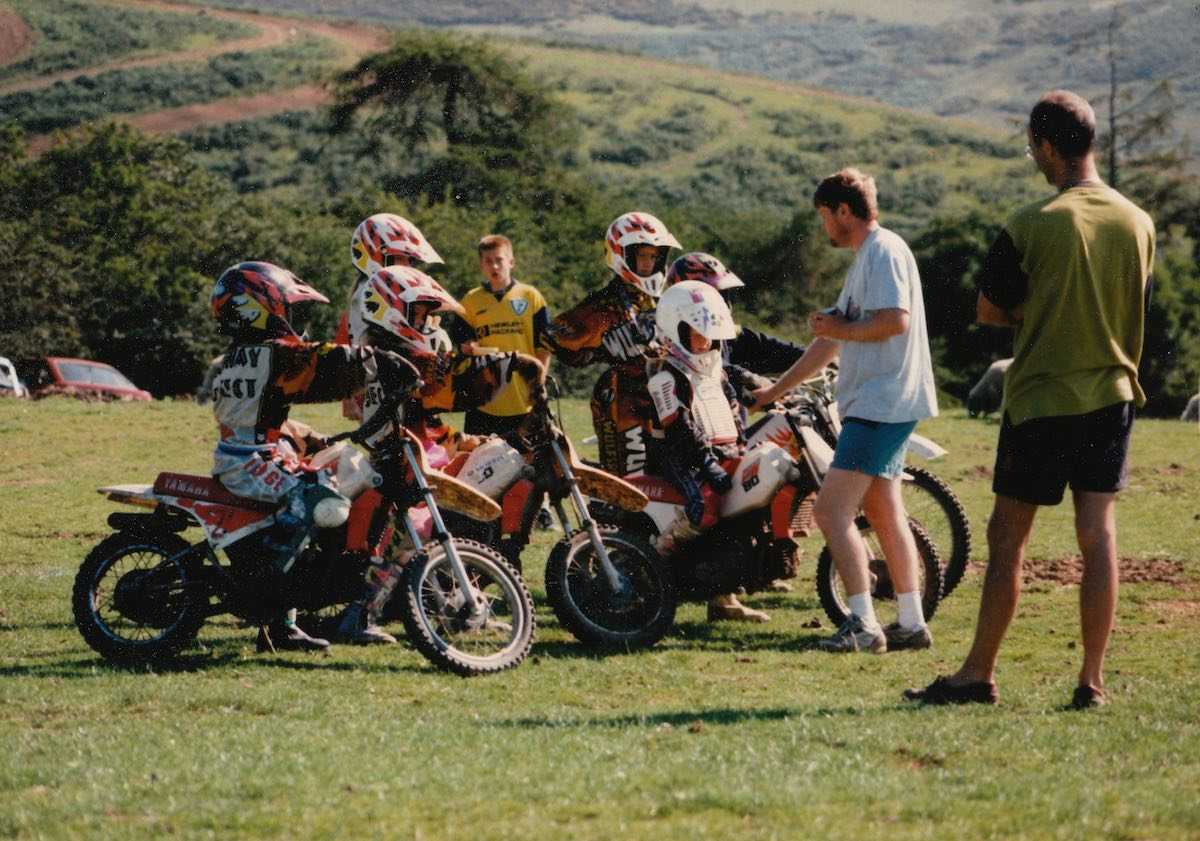 “I took this photo in Aug ‘97 on Tommy’s farm in Wales. It shows Paul and Dave with just about the entire fruit of our loins, mounted on bikes like lambs prepared for the slaughter. Are we all such bad parents? A week or so ago, when we had what is nowadays a rare night where we were all together, I decided I’d check their views before I wrote this. I thought it might be useful to sound out their reasoning, as we’d all arrived at our own conclusions separately and without any consultation. But I got the kind of responses I should have known to expect after twenty odd years. Paul made some quip about kids having as much right to die having fun as we have, while Dave shrugged, tipped his head to one side and inquired why I was asking him stupid questions that it would take us hours to disappear up our arses about, when all three of us already knew the answer. However both in their own sweet way, without resorting to any protracted ethical or moral arguments, reminded me that I had thought it through and, given my views on life – and death – had arrived at the only possible conclusion.”

“I wouldn’t dare to tell anybody else what to with their babies because I can only truly be responsible for mine. But if I’d had any nagging doubts they’d have evaporated on Nick’s eighth birthday, a couple of Aprils ago. My SRX had been off the road for six months and as I’d finished it just the day before, I’d agreed that we’d go to school on it as a birthday treat. As we pulled up by the gate with a roar, half his schoolmates looked up from the playground below and when he removed his helmet and waved to them, even his ears were glowing. I watched him walk proudly down the stairs carrying his lid into a small crowd and as I rode off, I could still hear his voice buzzing with excitement and pride as he spoke to his bredren, “Yeah, it’s my dad’s. He’s just rebuilt it. I used to go on it all the time. I’ve even ridden an 80cc motocrosser myself when I was only six…””

So what do you think? Do you, have you, or would you ever carry a child on the back of your motorbike? And if not why not?

Obviously as I said above, only you can decide what’s alright for you and yours so there can never be a right or wrong answer. However, there is the potential for a very interesting discussion so I would love to hear from anyone who has an opinion on the subject that they would like to share – whichever side of the debate they’re coming from (simply add your views to the ‘Leave a response’ box just below).