Scroll to Top
Categorized as
3312
Tagged as
motorcycleriders' lives
Related 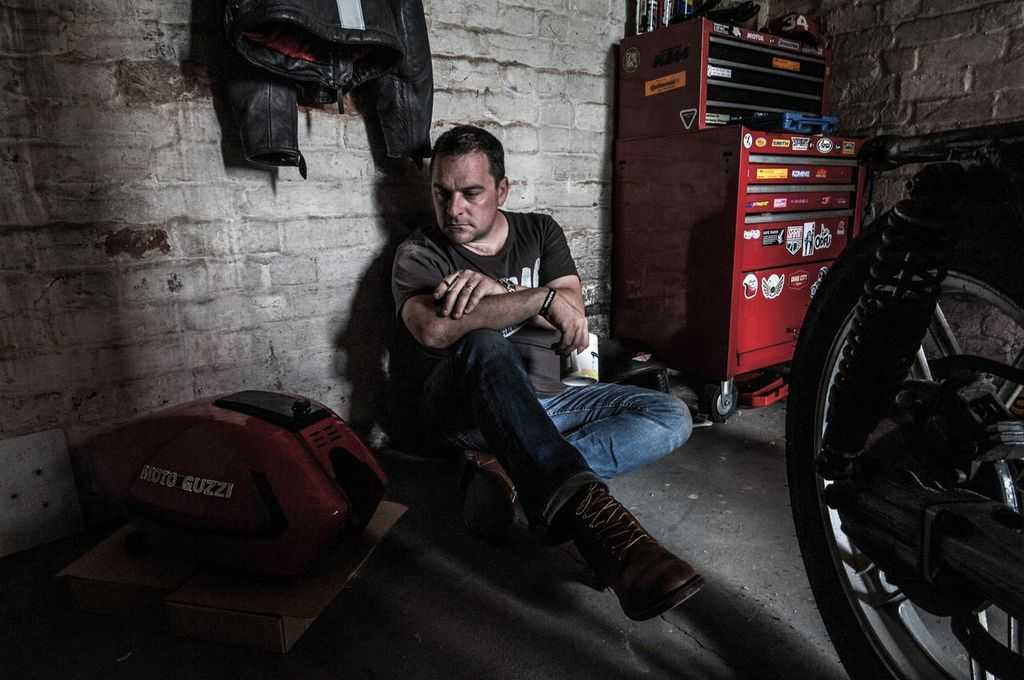 Trepidation, followed by utter joy; same as everyone else. More specifically it was a Honda C50 that was so old it had a black & white registration plate running along the front mudguard. It was given to me for nothing by a fella I worked with as a labourer at, and I’m not making this up, Sandy Balls holiday park and farm in the New Forest. It was shit, but it was my first experience of motorised freedom. I was mobile for the first time, with an engine man! In the countryside, that’s everything when you’re 16. On that basis, it’ll always be the best bike I’ll ever own.

1983 Honda VT 500 Ascot, imported from the US forever ago and then spruced up in to a street tracker as a special favour by Tim and Kev at Spirit of the Seventies and painted by D-Lucks in Brighton. It’s the cheapest bike Spirit have ever made and, because they’ve done so well and are now making genuine top end dream machines, the cheapest they will ever make. Also got a Harley Softail Slim which I have plans for. Hunting for another big trailie too; an old XR or similar.

I find it really hard to make lists of favourite things. Bikes are like music or books; it’s a mood thing and there are so many moods, ever-shifting. That said, the constant in this is the original Ducati Hypermotard 1100. I test rode one in, I think, 2007, and almost hurt myself really badly. Twice. I love a supermoto, and this one’s gloriously nuts and brutally pretty. Still top of the want list.

I bought an RD350 YPVS at trade from the bike shop I worked in in Bournemouth aged 18. Lost the front on the way home one night and went down hard. I was trying to drag it out of the road when a woman from a nearby house rushed out and tried (quite hard) to put a blanket around me because she said I was in shock. She’d recently been on a first aid course, it emerged. Anyway, the hairy bit wasn’t the crash, it was that I didn’t have a bike licence, so I was terrified I’d lose my job. They kept me on. That’s bike shops for you kids.

You know what? It’s not one of the big ones, or the exotic ones, or one of the ones which led to adventures or crazy days. It’s an amalgamation of all the ordinary, everyday rides to work, or the shops, or back from friends’ places which ended with me sitting on an old ammo box in the garage with a beer and a fag, smiling from ear to ear as the bike tinged and pinged away beside me. Bikes make the humdrum wonderful because they put a little bit of magic in every one.

I don’t play music when I ride, I sing instead (only place my singing isn’t offensive to others). But it would be The Clash’s “London Calling” album. That’s the soundtrack to everything.

Just as no coffee tastes better than one you’ve brewed on your own campfire, no arrival is better than the one you make by bike. There’s a sense of fulfilment, adventure and achievement about getting somewhere perched on an engine in the open air which can’t be beat. You work for and earn your arrival, and all that follows is sweeter for it.

The percentages. And a lot of the t-shirts.

It’s all about access now, and it’s a real issue. The joyless, nannying bastards in charge think it’s up to them to decide how risky folks’ lives should be so they’re making it harder and more expensive for kids to start to ride. On the upside, there’s so many sub scenes within biking now which appeal to kids through fashion, skate and surf culture and so on that there’s fresh encouragement for lots of them to break the bureaucratic surface tension and get to the dirty air above with the rest of us.

Couldn’t give a fuck about legacy nonsense but I hope very much that those I love think fondly of me in retrospect.