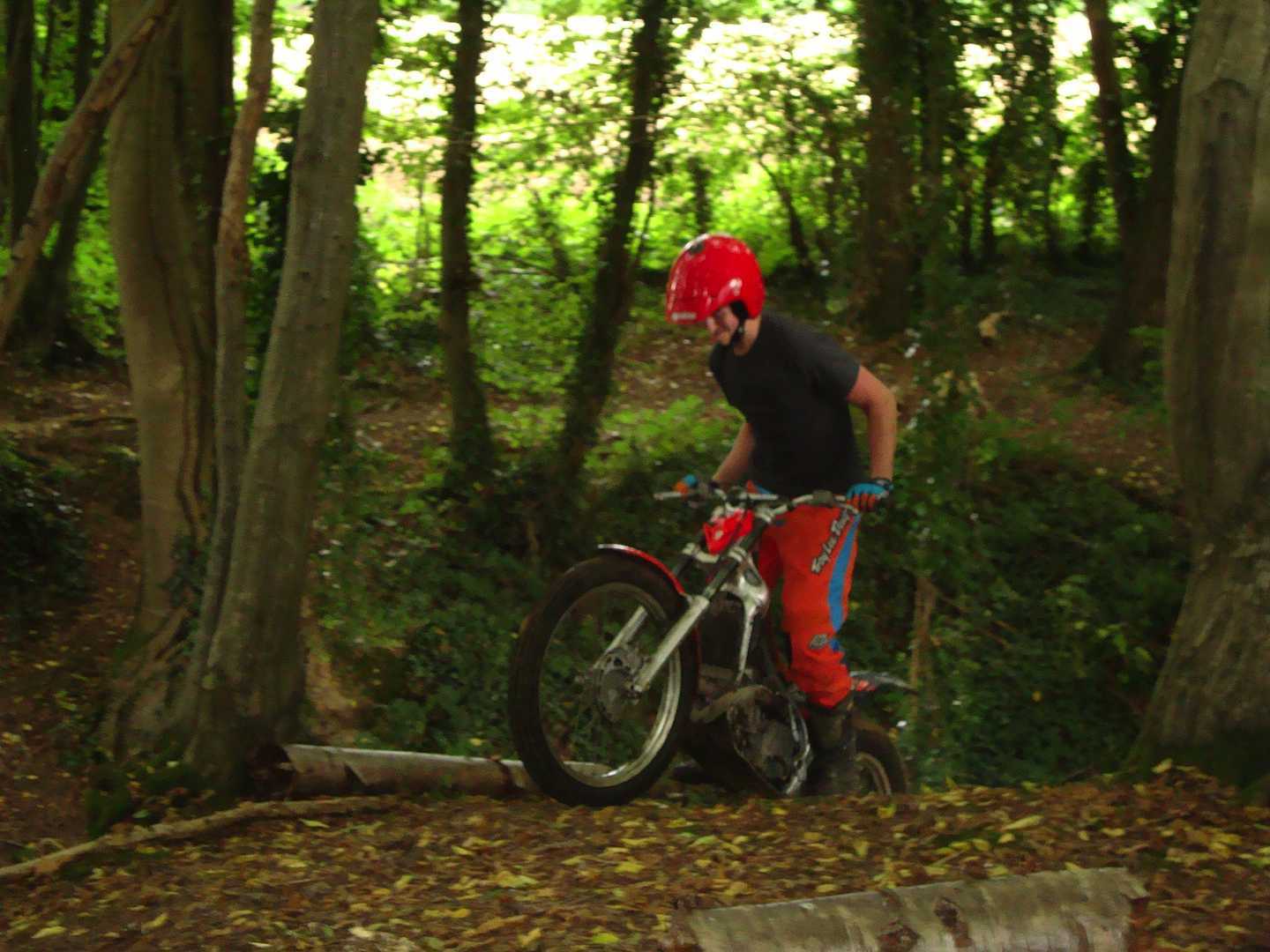 Our man checks out trials school… The verdict? Muddy good. 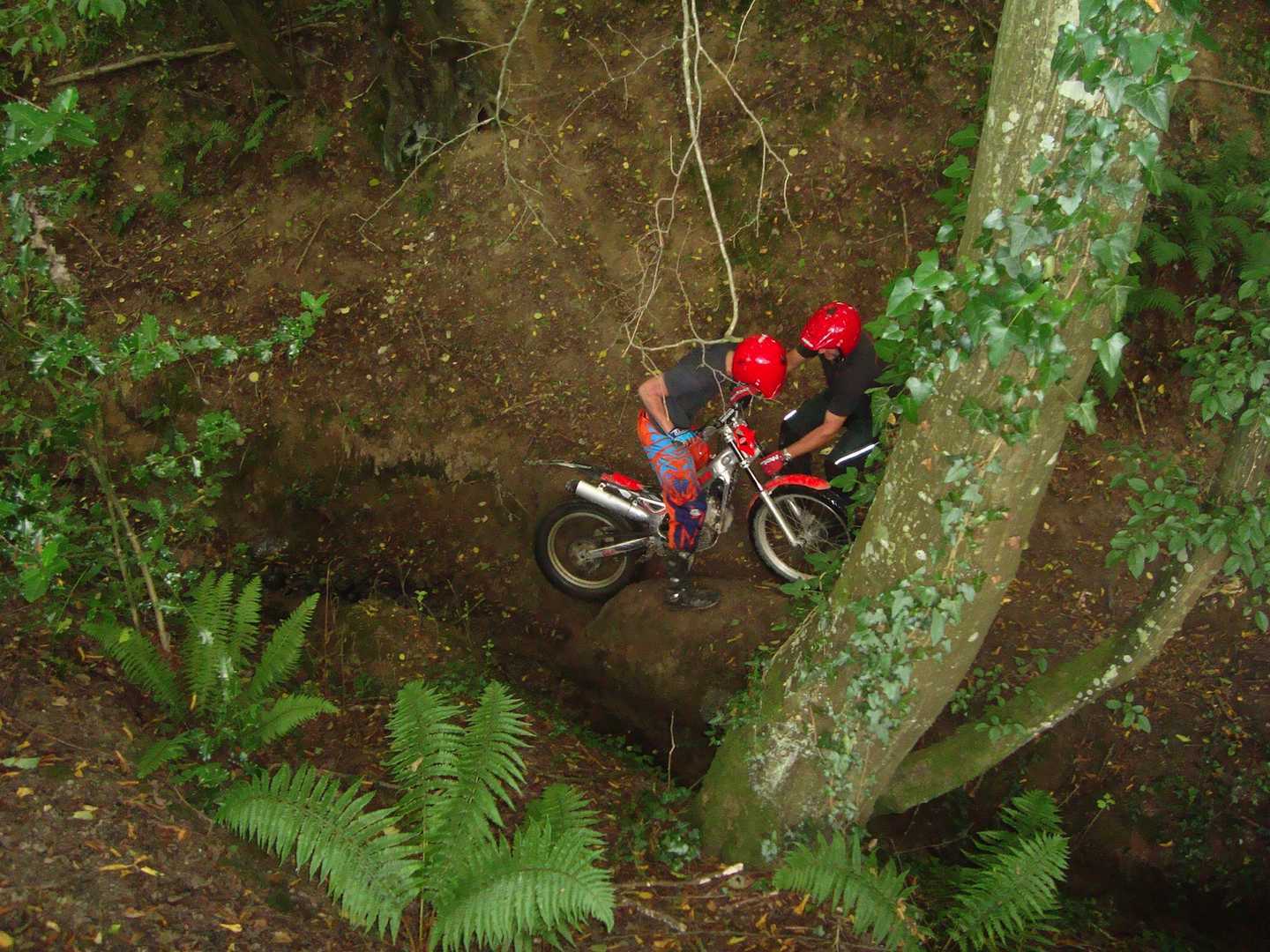 Talk about bike sport and most people think of Rossi or Shakey wrestling a beast round a bit of tarmac at impossible speeds. But a far older, and arguably purer, form of sport still goes on round the country, enjoyed by weekend riders and massively skilled pros, without a shred of tarmac in sight.

Motorcycle trials is an incredibly skilled sport where the aim is to ride round impossible terrain without falling off or even putting a foot down. If you can control a trials bike halfway up a sheer rock face you have the fundamentals of controlling anything anywhere. Having watched a few trials sections it struck me a whole shedload of fun too, which after all is what it’s about.

Tight finances (and the fear of being shown up as an unfit coward) led me to buy a session at trials school for my son Jonny. Jonny, unlike me, is pretty good off road, having ridden schoolboy scrambles for several years, he is currently running 3rd in his club enduro championship. But it’s all been aggressive balls-out stuff and quite often the nadgery bits in the woods are what catches riders out. Would trials help an experienced rider ride better, and more important, would it be fun? Time to find out. 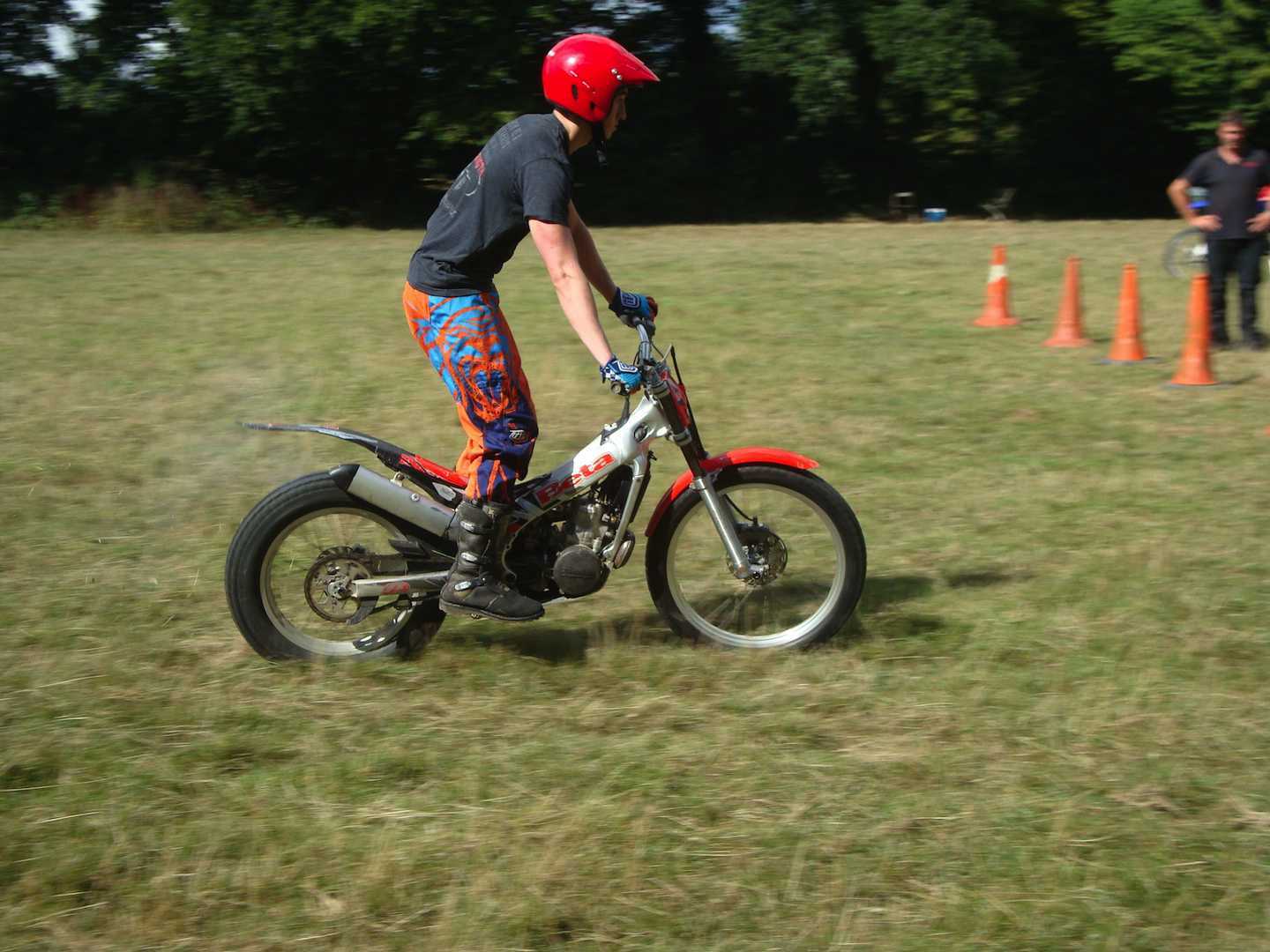 The first problem was finding a school. If you have a bike you can probably find a bit of ground, but there aren’t many dedicated trials courses and even fewer offering instruction and loan of bikes. If you’re in the frozen north Dougie Lampkin runs training courses but as a southerner I was pleased to find Tricks in the Sticks, based in Kent and run by Jason Pearce who has been riding trials for 20 years and is a former riding mate of enduro legend Graham Jarvis. The school is based at Jason’s parents’ farm and has the use of a large field for open practice plus several acres of hilly woodland scattered with logs and streams. He’s happy to teach trials, enduro or simply stunts for people who want to practice wheelies and stoppies on a forgiving machine on soft grass. Jason supplies helmet, boots and gloves – enduro or MX pants are good if you have them but you can wear jeans if not. Shorter riders will find no problems as the bikes are light and low. 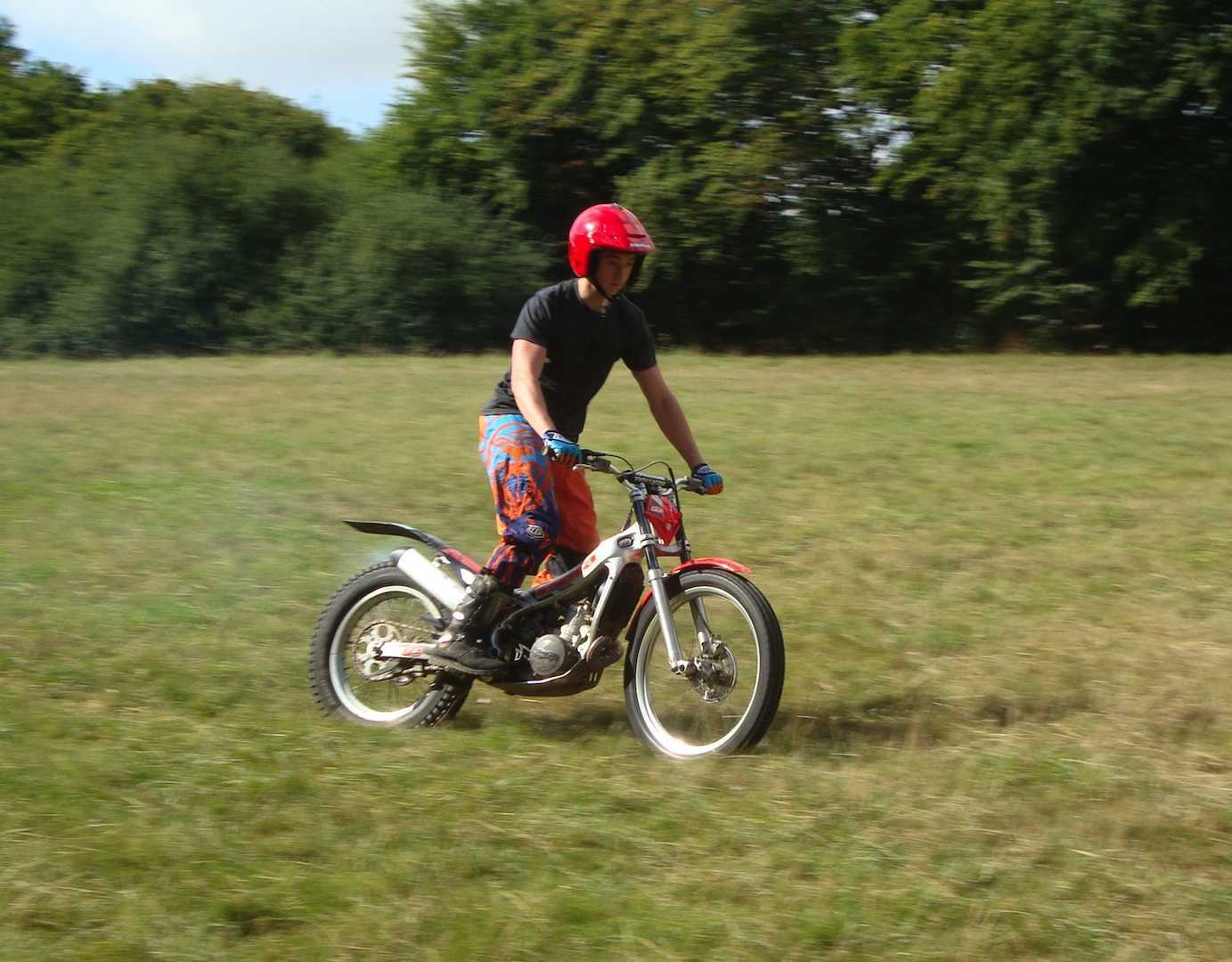 Our day started at 10am with introductions and signature of the obligatory indemnity form. The bikes are Beta 270cc Rev3’s, powered by single-cylinder 2-stroke engines, weighing 60kgs and with enough torque to climb the side of a house. Modern machines, they have clearly had some use but all are well maintained and the most it would cost you if you really lunched one is £50 (though how you would do that I don’t know on these rugged little things).

Out to the riding field and the lesson started with the basics – first, how to turn. Unlike a road bike you don’t countersteer and most of the work is done with your legs, pushing the bike down into the corner while the rider sits almost upright. Get it right and you can ride round in a circle little more than the bike’s wheelbase, with the old ‘riding round the cones’ exercise proving how little space you can actually get away with. 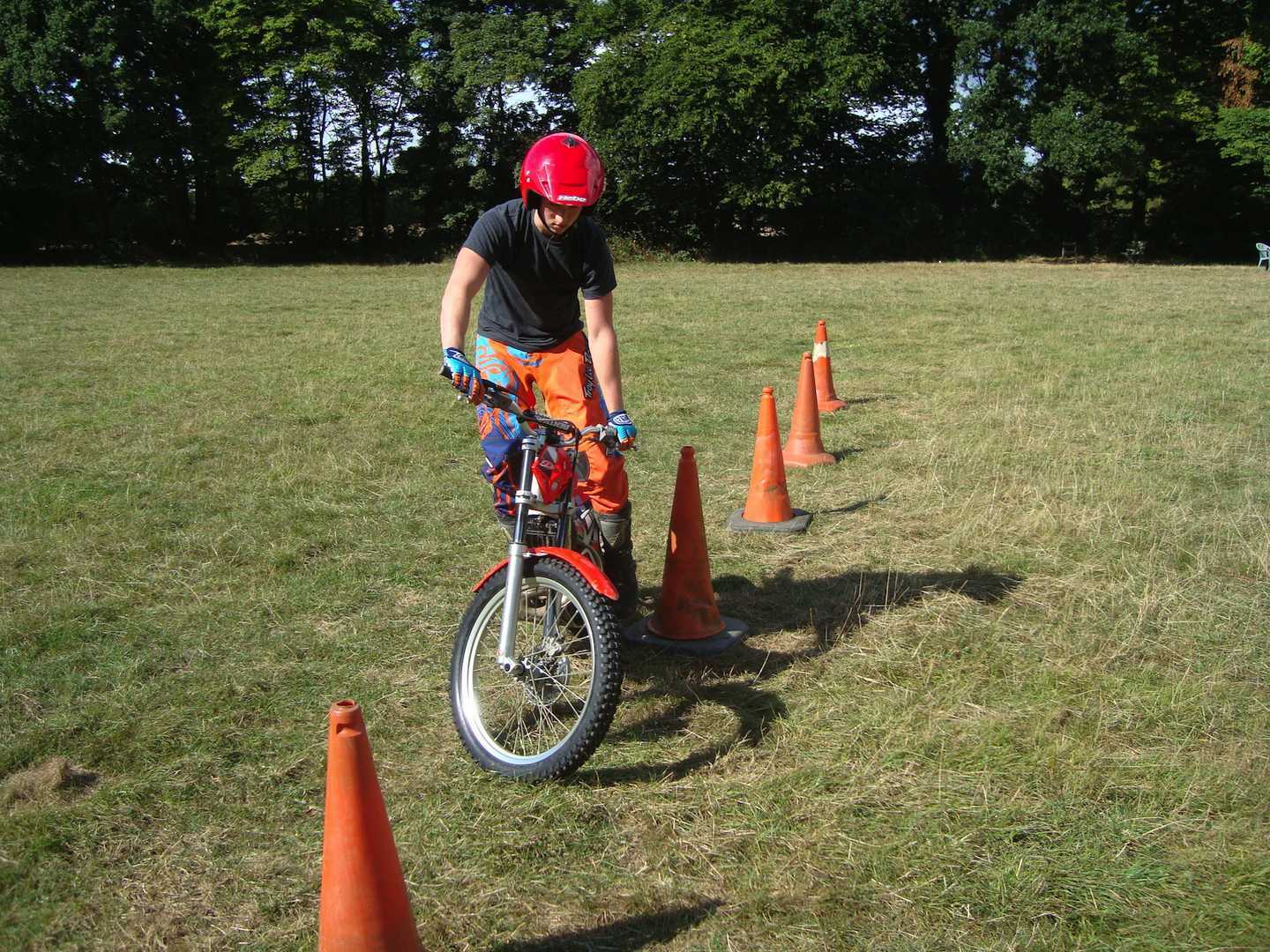 Jason demonstrated on a WR250 to show how it’s done, something a fair bit harder than the same manoeuvres on the taut little trials iron. From turning the attention moved on to… not moving. Good trials riders can stand still on the bike with their feet up for minutes at a time and even a novice can stay up for a surprising amount of time with the right technique, involving a whiff of throttle and clutch, balanced by the brakes. Overbalance a little and you can inch forward to regain balance without putting a foot down.

Moving again and this time it was time to get used to loss of traction. Jason demonstrated controlling a locked rear wheel by shifting body weight from side to side in a high-speed slalom. Even a front wheel slide can be controlled surprisingly well, not something you’d ever want to try on the road… weight back to unload the front, hold the brake on then power forward. The front wheel slides and you can actually steer it straight with a locked wheel, balancing the tendency to fall over with the same weighting the pegs techniques learned earlier. 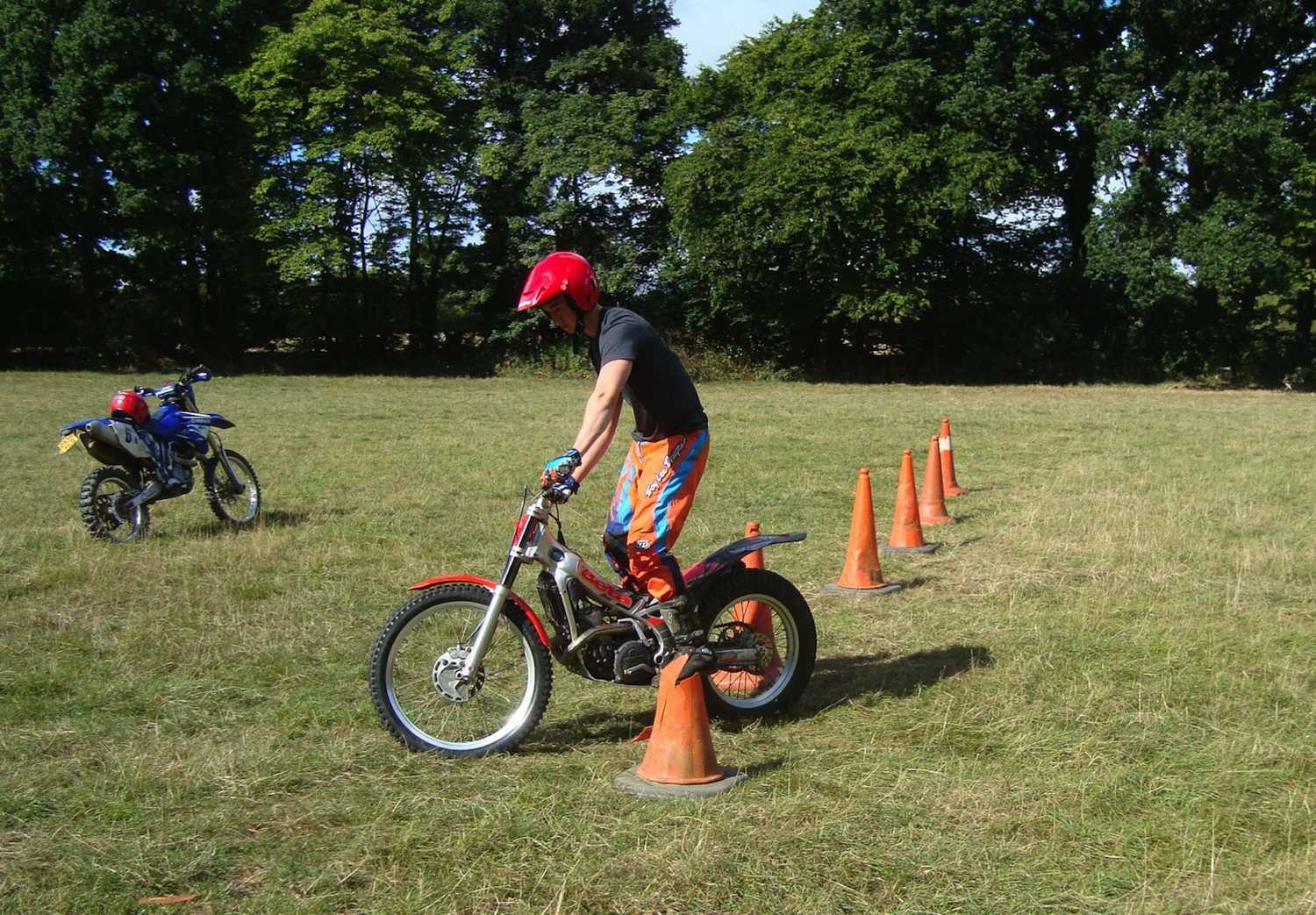 After practising these for a while the heat of the day was starting to tell, so we took a break to rest and chat over a cold drink before heading off to play and practice what we had learned on the tight turns and steep slopes in the woodlands. Even after only a little instruction you’d be surprised how with the right persuasion and techniques, the trials bike can climb straight out of a deep stream bed. 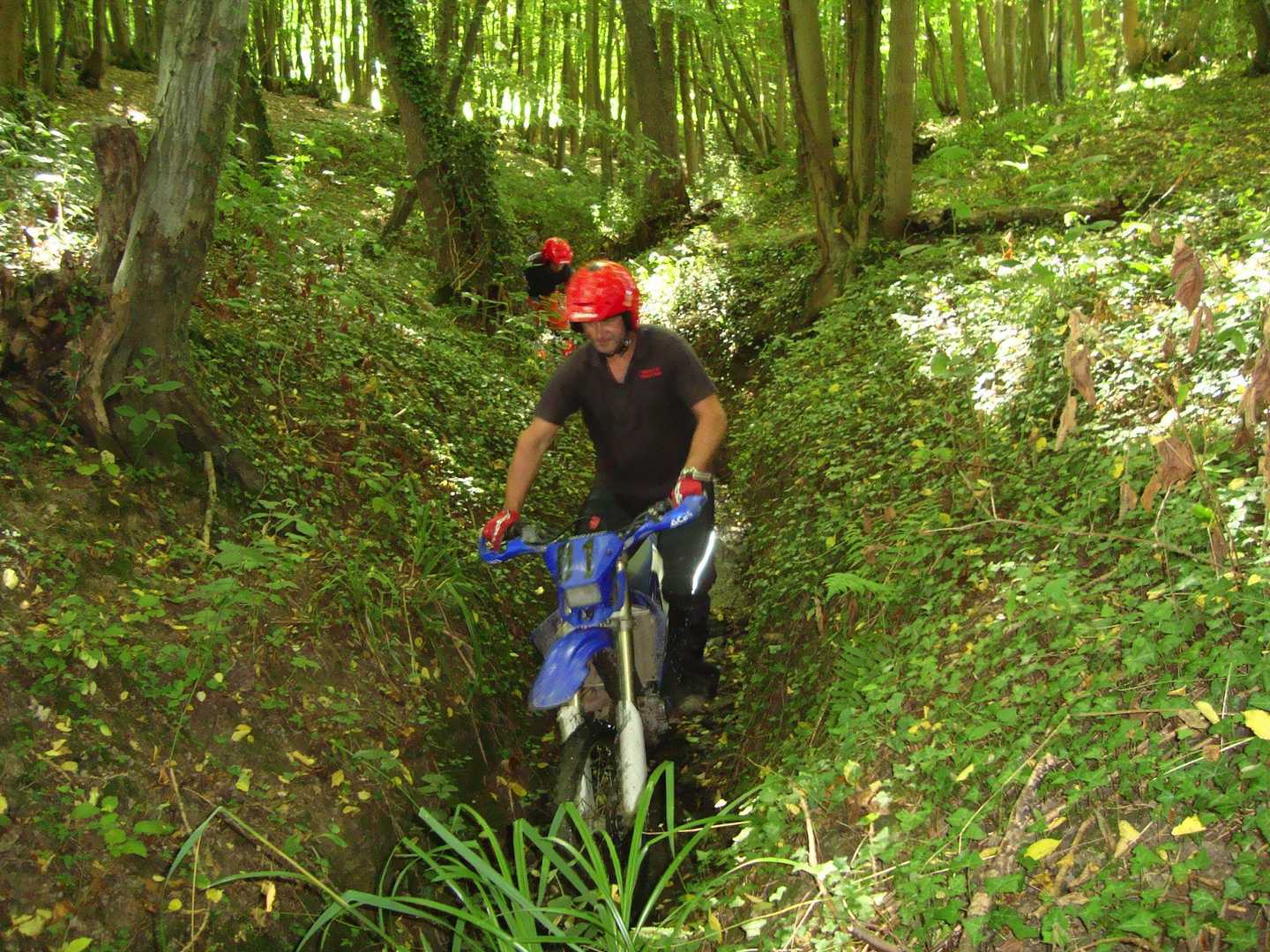 Which took us through to lunch, cool drinks and fresh rolls from a local bakery, included in the school’s package. It was all very informal and as we sat in a sunny Kentish field chatting and comparing old biking injuries, the atmosphere was completed when a Spitfire rumbled overhead.

Refreshed and rested, for some the next part was the main course, wheelies. A far cry from the power ranger ‘wind it on and let it go’ technique, the way to a controlled wheelie is to use the suspension – bounce down, a light application of throttle and up she comes, easy as anything. Gathering confidence as the wheel rises, shift the body weight to hold it. Within a half dozen runs using the techniques Jason showed us Jonny had the hang of it, keeping it up (fnarr) for almost 100 yards. Less easy, stoppies, a stunt favourite but what relevance to trials I wondered. All was revealed as Jason showed us how to put the two together into a bunny hop, an essential skill in getting over obstacles or up steps. Lift the front then as the bike rides over the obstacle hop the back to clear it and stop you getting thrown forward. Easy when you know how! 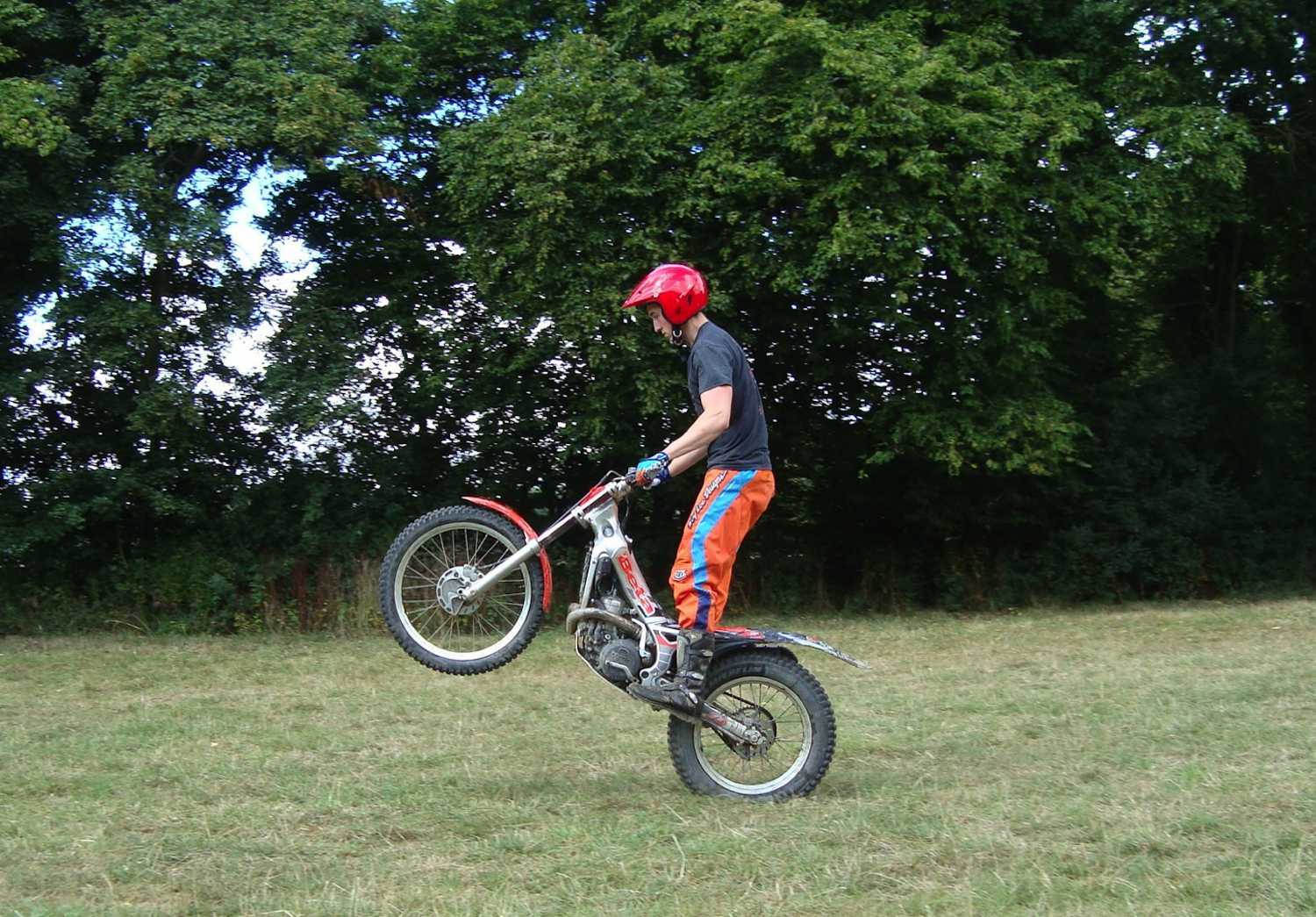 To round off the family of techniques we finished with the pivot turn. Even a trials bike needs some space to turn, but sometimes you just don’t have it. Pop the front right up from a standstill, let it fall to one side and pivot it round your foot and now you do! Don’t try it with the Gixxer. 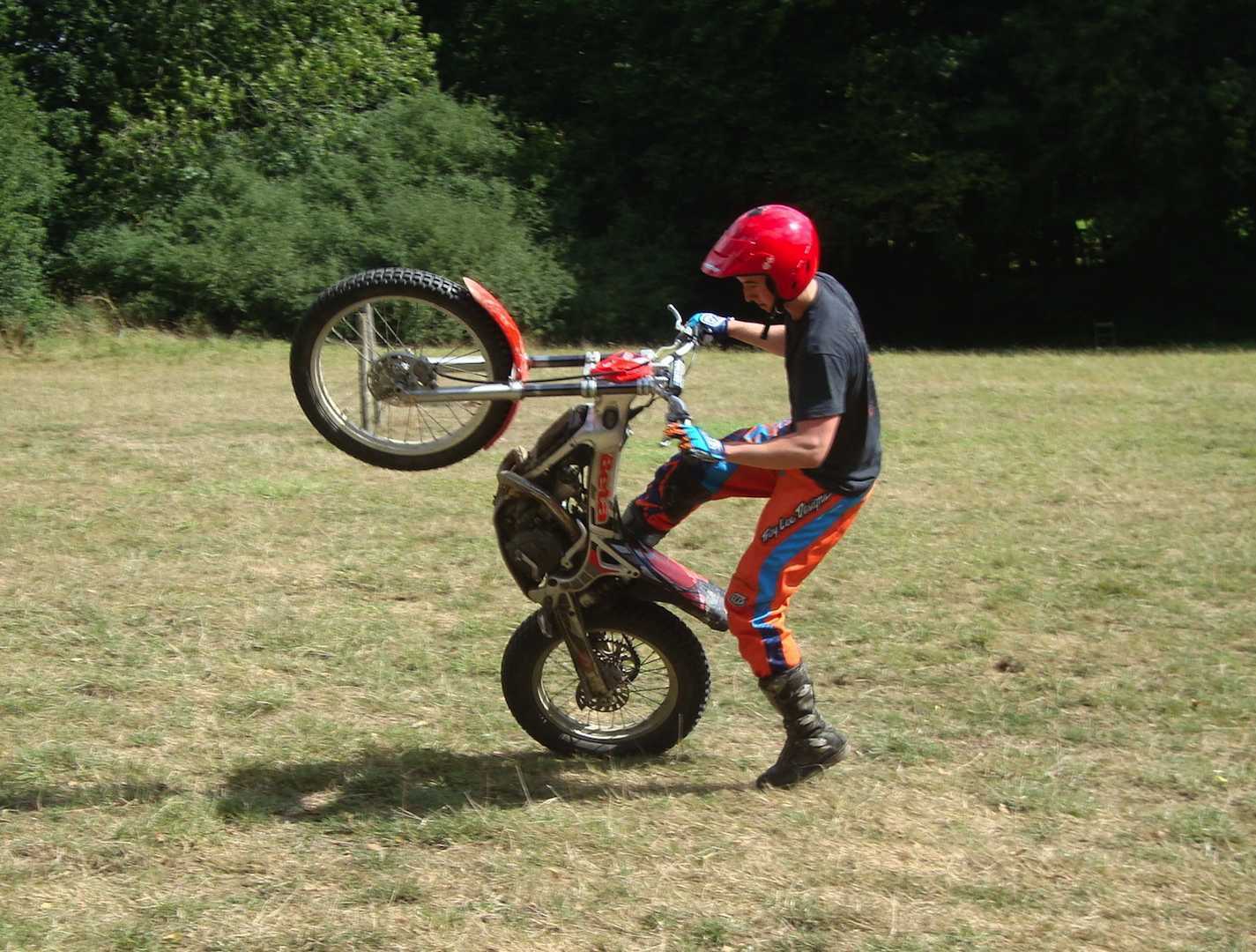 After practising aviating wheels for a while we were ready for another cool drink in the shade and then the bikes headed off one more time for the woods and some more challenging sections. Joining them after a short walk, I watched as they hopped effortlessly over logs and tree stumps as tall as your knee, with the ultimate challenge a 45-degree slope culminating in a vertical stump. And he only bloody did it. Awesome. 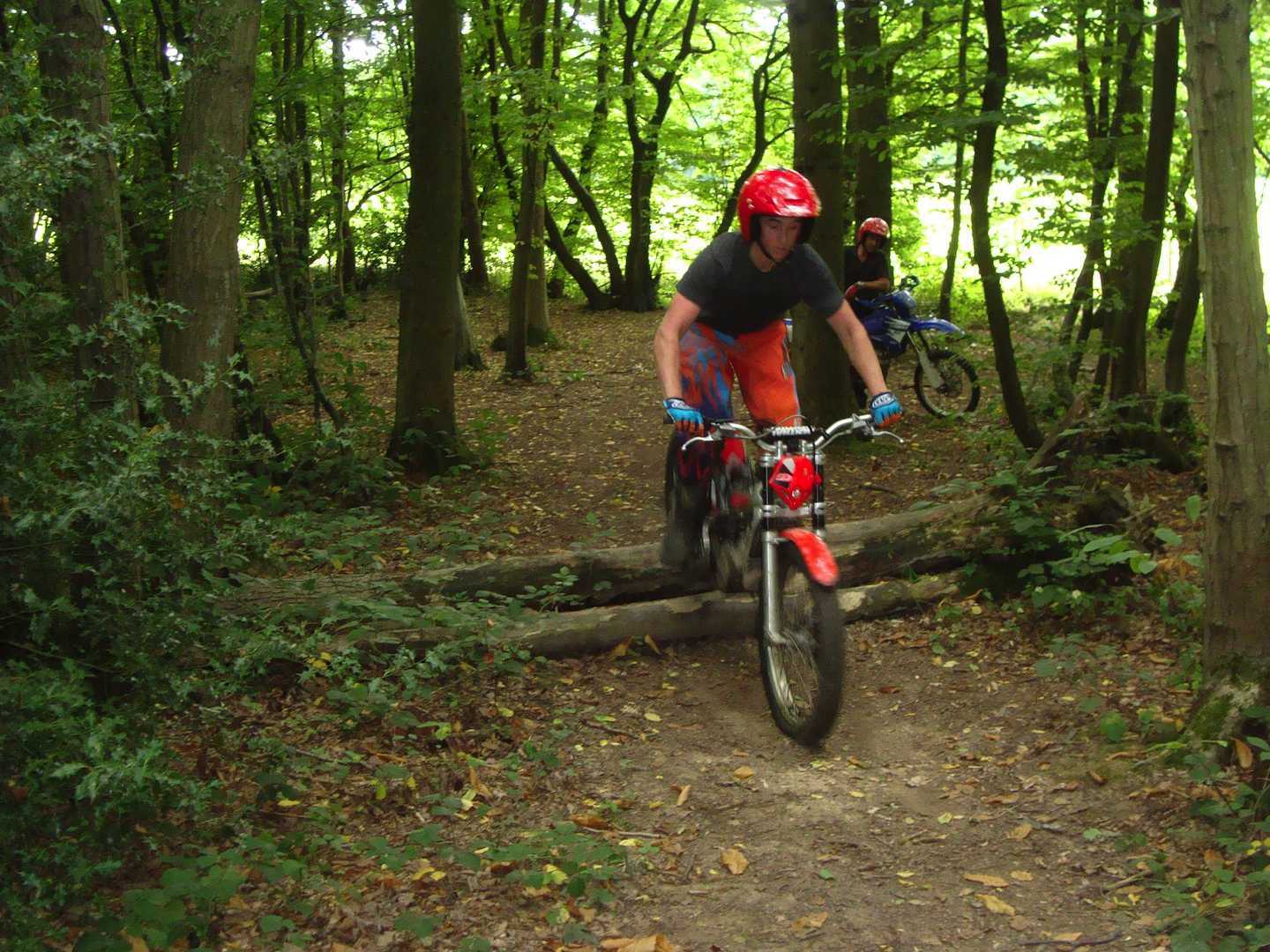 Is trials school for you? If you want to learn off-road riding techniques, definitely. In the same way as you learn things at a road race school or MX try out day, there are tricks of the trade you’ll only acquire if you’re taught them, and having the right bike, expert coaching and a great piece of land to ride on is the way to go. If you’re just in it for a laugh I’d still recommend it. You won’t become a wheelie god overnight but you’ll understand a bit more about how bike suspension and balance affects your riding and have a hoot at the same time.

Cost wise budget around a couple of hundred – more if you want an intense one to one, less if you spread the cost with up to 8 people. Less again if you only want a half day, but I’d recommend a full day as we did, because you can do so much more. It’s quite physical but it’s worth it.

Approval Rating 9.5 out of 10… not cheap, but a superb day out, top skillz and giggle factor, what’s not to like? 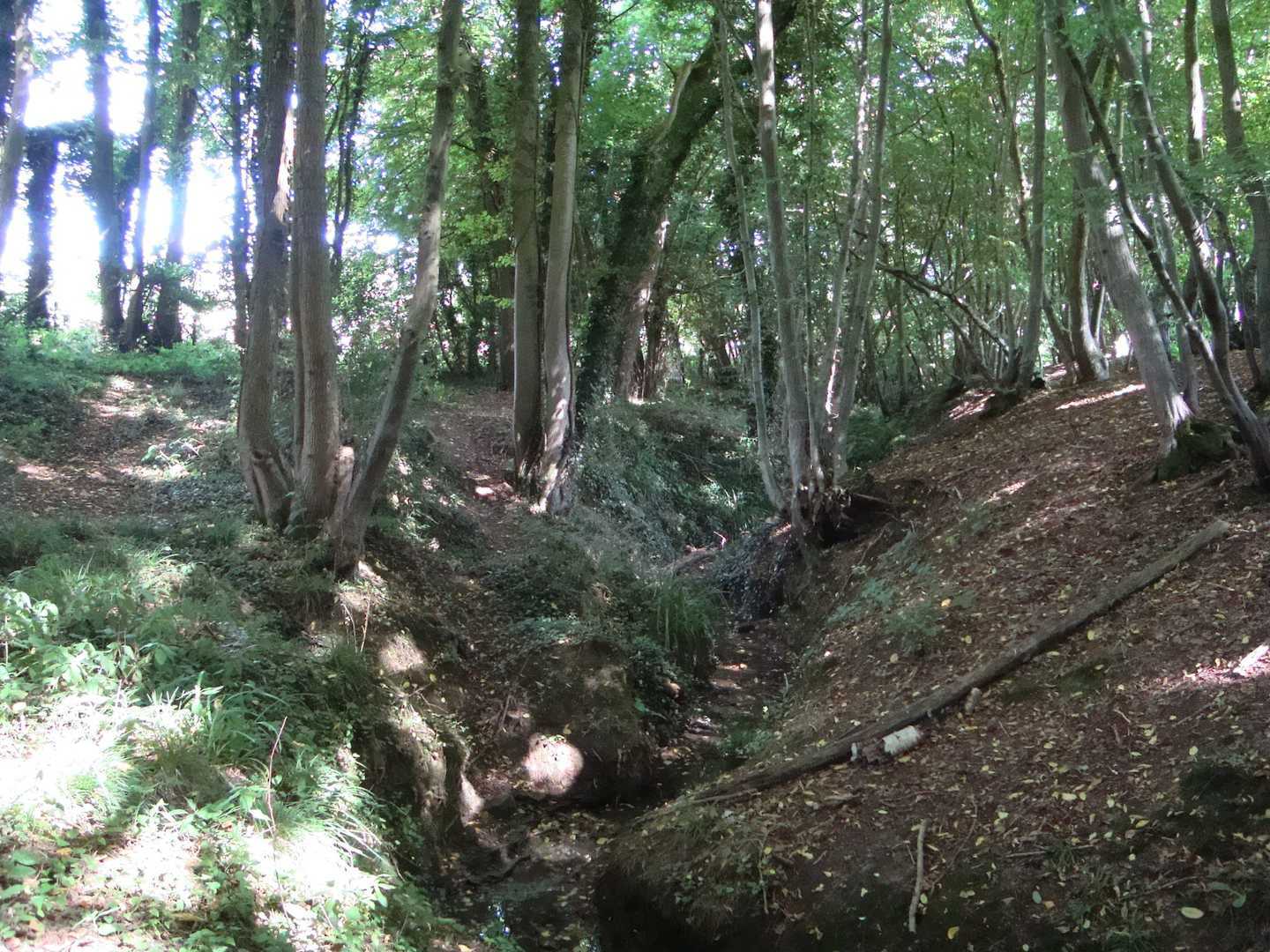