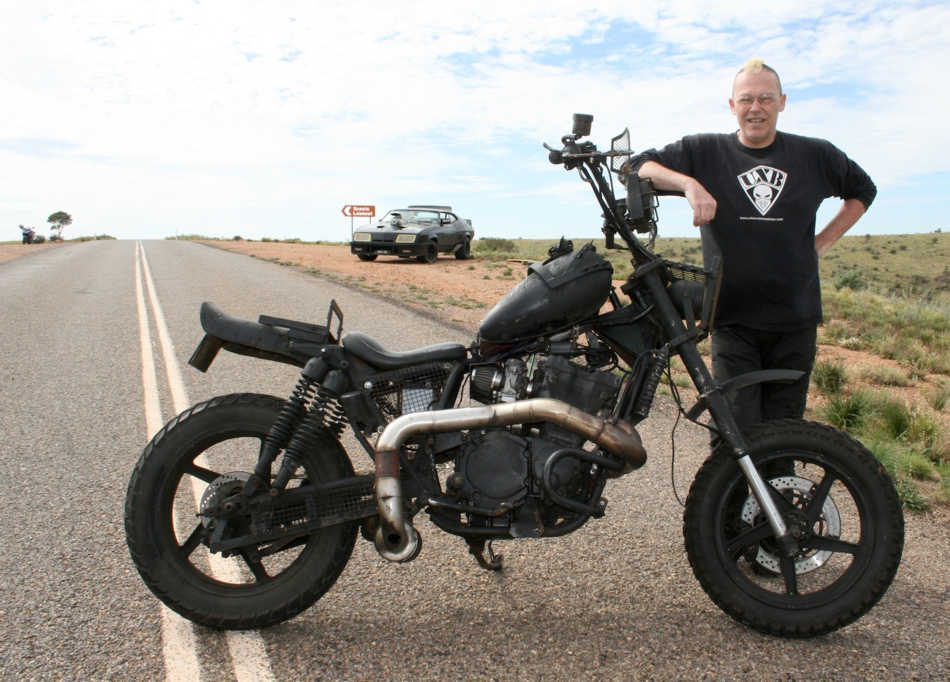 1. What was your first motorcycling experience?
Umm, think I was about 12. My uncle had a C50 (or 70 or 90, dunno) and he let me have a quick go up the drive of his house in Old Buckenham in Norfolk. Well, that’s what he intended me to do anyway – I actually just disappeared off down the road, sans lid, round the village and came back about 10 mins later to a right royal bollocking. Shades of things to come perhaps?

2. What is your current bike?
Got five (six if you include the mini-moto version of one of my big bikes that lives in me lounge) – insane-looking CB750 thing with a 750 Gixer motor (the granddaddy of all rat/survival bikes, built by BSH magazine in 1984), equally mad GSX1100 with 2CV headlights and knobbly tyres (The Changeling, another very famous rat), single-sided front end Bandit streetfighter that came second in last year’s Britain’s Got Biking Talent comp against bikes costing £40k plus, a GPZ900 trike with a 300 section front wheel and a stainless steel IRS back end, and a GSX-R 1100-engined Katana that’s still being built at the mo’.

3. What bike would you most like to ride/own?
Kaneda’s bike from Akira and/or Jack Shit’s hub-centre-steered Katana from Bloodrunners… one day.

4. What was your hairiest moment on a bike?
Probably the crash in 2005 when I was forced onto the wrong side of the road on a Mille and hit a car head-on. The bike exploded in a huge fireball and I was thrown at least 65 feet and landed on me head. Bit gutted really, never been in a helicopter before and, even though I was air-lifted to hospital, I don’t remember it.

5. What was your most memorable ride?
Probably riding into Silverton in New South Wales (where they filmed ‘Mad Max 2’) on the Honda/Gixer thing (shipped it over specially) in 2010 for the 30th anniversary of the film and getting escorted by a yellow/blue/red Mad Max pursuit car and a black Interceptor with all the lights and sirens going. Just mind-blowing for a Mad Max freak like meself…

6. What would be the ideal soundtrack to the above?
I think the sirens and flashing lights were music enough – anything else would have been an anti-climax…

7. What do you think is the best thing about motorcycling?
The people who do it, really. There are a lot of arse’oles (a hell of a lot!), but I’ve met some really good folk through biking that I wouldn’t have done otherwise and they’ve become life-long friends. Can’t really ask more than that.

8. What do you think is the worst thing about motorcycling?
The indifference of the rest of the human race to how just a small error of judgment on their part can end someone on a bike’s life or leave them crippled for the rest of their natural days. You see it almost every day and it is depressing; the fact that you, as a motorcyclist, are really nothing more than an inconvenience to them, your life is nothing more than a slightly increased insurance premium…

9. Name an improvement you’d like to see for the next generation?
Don’t know about an improvement, but I’d like to see the cost of actually getting a motorcycle licence reduced, and fewer barriers to getting a big bike than there are currently (and they’ll only get worse come January). If things carry on the way they’re going, then the powers-that-be will manage to price us all off the road, rather than just legislate us as they’ve been trying to do previously.

10. How would you like to be remembered?
I’m not really fussed if I am or I’m not… I’m just a scruffbag who rides odd motorcycles and writes (reasonably) entertaining gibberish about them for a living, why should people in the future have any interest in me?